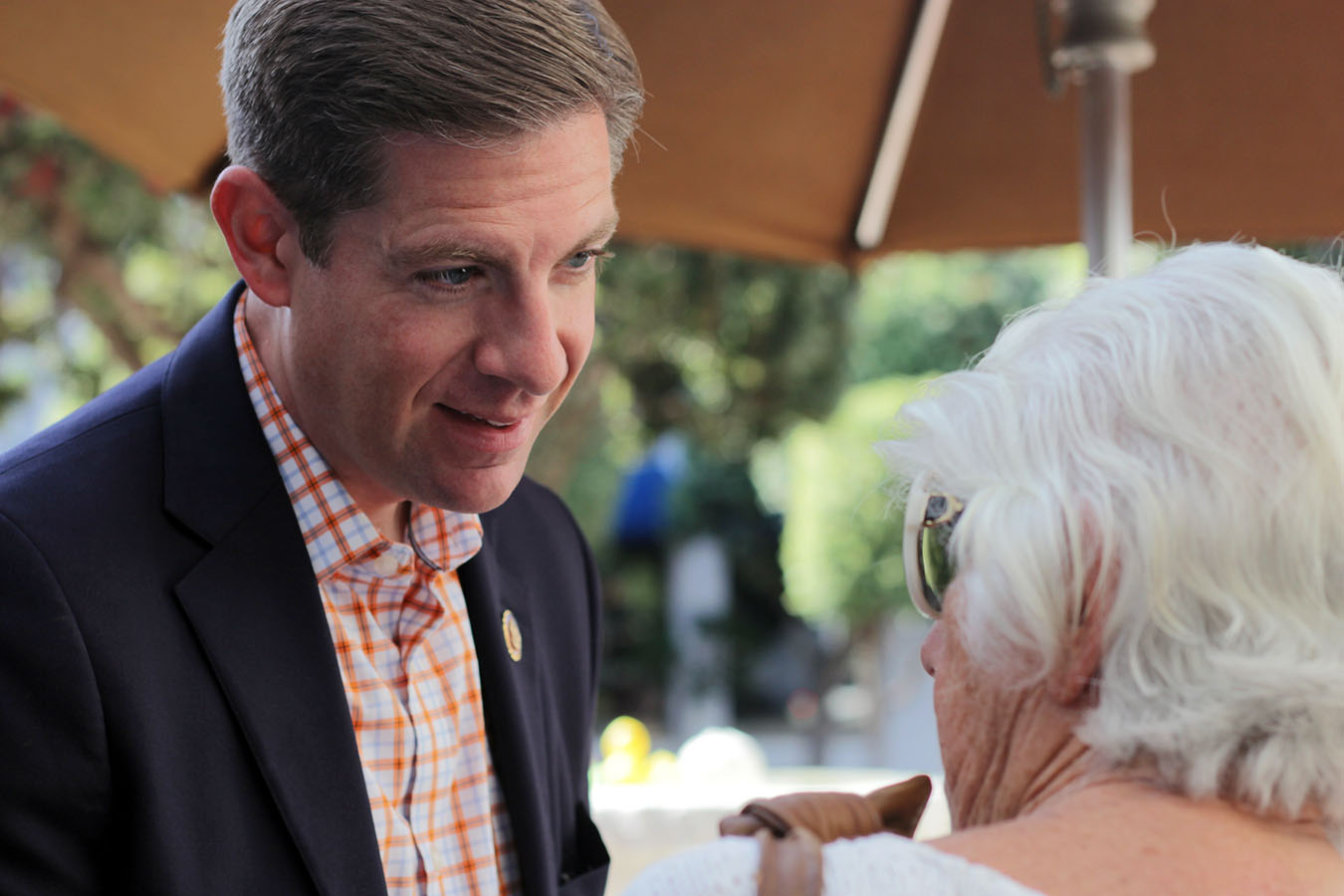 Levin Declines Maryott’s Challenge to Debate Ahead of Primary

Though there’s still a little more than six months to go before California’s Primary Elections, the apparent Republican frontrunner in the state’s 49th Congressional District race is already looking to verbally spar with the incumbent and Democratic opponent.

Earlier this week, San Juan Capistrano Mayor Brian Maryott, who will likely earn the Republican nod in the state’s Primary race this March, challenged Rep. Mike Levin, D-Calif., to a series of debates in the coming months.

“Our congressional campaigns offer differing ideas for the future of our district and voters deserve the opportunity to learn about them,” Maryott wrote in his letter inviting Levin to debate. “We owe it to the residents of the 49th congressional district to begin holding debates this fall.”

Maryott asked to hold four debates, one in each of the regions—north, coastal, inland and southern—of the 49th Congressional District, which encompasses North San Diego County and the South Orange County cities of Dana Point, San Clemente and San Juan Capistrano.

Noting that that General Election in November 2020 is more than 16 months away, Levin is opting to wait until the spring, when, he told The Capistrano Dispatch, he “will debate whomever emerges as the challenger after the March Primary.”

“It is wildly premature for candidates to be prejudging what voters may choose to do in March,” he said in an email, after citing California law, which allows the top two candidates from the Primary—regardless of party affiliation—to face off for the congressional seat in November.

Based on the most recent campaign contribution disclosures with the Federal Election Commission, Levin and Maryott, both San Juan residents, are poised to go head-to-head in the General Elections. As of June 30, there’s been no Democratic challenger, but two other GOP candidates who have filed Statements of Candidacy—Mara Fortin and Steven Craig Knoblock—don’t have any money in their war chests.

Shortly after announcing her congressional bid this past June, Fortin had raised $19,970. However, according to her campaign’s FEC filings, Fortin, who owns several Nothing Bundt Cakes franchises in San Diego, has returned her donors’ contributions.

“It is wildly premature for candidates to be prejudging what voters may choose to do in March.” – Rep. Mike Levin.

Knoblock, an attorney from San Clemente, doesn’t have any contributions or expenditures recorded, according to his FEC filings,

The Dispatch’s requests for comment to both Fortin and Knoblock were not immediately returned as of press time.

In a press release from his campaign Tuesday, Maryott called out Levin for refusing to debate ahead of the March 3 Primaries.

“Frankly, I find it extremely disappointing that our congressman rejected the opportunity for voters to learn more about our differing ideas for the future of our district and country,” Maryott said in the release, which referred to Levin as a “rookie congressman.” “Our neighbors should have every opportunity to make an informed decision on their preferred candidate before going to cast their ballots, and Rep. Levin is denying them that chance.”

Since launching his campaign to unseat Levin this past spring, Maryott has criticized the freshman congressman’s support and introduction of legislation that the San Juan mayor believes to be too extreme for the county.

One example of an extreme measure Maryott has pointed to has been Levin’s backing of the Green New Deal, a resolution from fellow House Democrat Rep. Alexandria Ocasio-Cortez to encourage the U.S. government to take action against climate change.

“Frankly, I find it extremely disappointing that our congressman rejected the opportunity for voters to learn more about our differing ideas for the future of our district and country.” – Mayor Brian Maryott

The House seat for the 49th District had long been held by nine-term Republican Congressman Darrell Issa who had announced his decision to not seek reelection in January 2018. Issa’s departure made the district a key battleground race in the 2018 elections as Democrats were hoping to ride their “blue wave” to Capitol Hill by retaking control from the GOP.

Republican candidates were able to hold back that wave in the 2018 Senate races and maintain the majority, but the House was overtaken by Democrats, many of whom were first-time candidates such as Levin and Ocasio-Cortez.

Maryott had sought the congressional seat in 2018 before losing to fellow Republican candidate Diane Harkey in last year’s Primary Elections. Harkey went on to lose the race against Levin this past November, receiving only 43.6% of the vote.