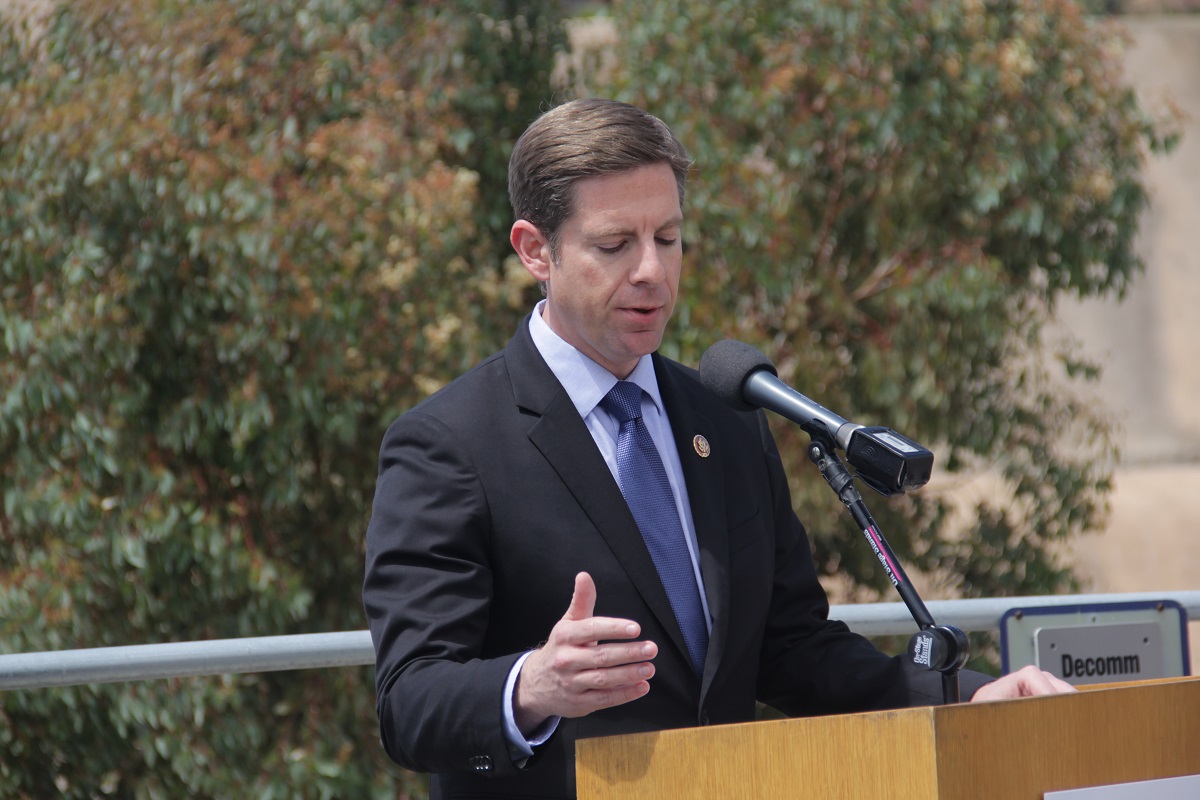 Following a tour of the San Onofre Nuclear Generating Station (SONGS) on Tuesday, April 16, Rep. Mike Levin, D-CA, announced his plans to formally introduce legislation that could give priority to the nuclear power plant when it comes to removing its spent nuclear fuel.

Levin said the bill, referred to as the “The Spent Fuel Prioritization Bill,” would require the U.S. Department of Energy to consider a set of three criteria when determining which sites to first begin offloading nuclear waste.

“As you may know, there are two active faults and a whole network of inactive faults around this facility,” Levin told reporters during a press conference at SONGS alongside fellow Congressman Harley Rouda, D-CA.

“The legislation requires that the federal government take the responsible step of giving top priority to sites that are located in areas with the highest risk of these three criteria,” Levin said. “It would also direct the agency to prioritize sites that are decommissioned or decommissioning since they are no longer producing new spent nuclear fuel.”

Levin’s move to introduce the bill, which he said he’d be presenting when he returns to Washington, D.C., comes weeks after he submitted a letter to the House Appropriations Subcommittee on Energy and Water Development, asking for $25 million in appropriations to fund a consolidated interim storage program that would remove fuel from the nation’s decommissioned nuclear plants.

The temporary storage of nuclear waste is currently unauthorized under the Nuclear Waste Policy Act, which was enacted in 1982 and meant to identify possible sites for the disposal of spent nuclear fuel.

Congressional legislation to allow for the interim storage of spent nuclear fuel passed in the U.S. House of Representatives last year but died in the Senate before the term ended. Interim sites in New Mexico and Texas are currently going through the application process.

Addressing the current model of the oldest fuel being removed first, Levin said the bill would supercede it. He added that the first-in, first-out model “would take literally decades and decades” for the older fuel to be removed.

When asked if he believed the spent fuel at SONGS would go first if his bill is passed, he emphasized that the San Onofre site meets all of the three criteria.

“Well, I don’t think there’s any site in the U.S. that has the seismic risk, the population density and is a decommissioned or decommissioning site,” he said. “I’m fairly certain we’re the only site quite like it.”

Levin then said that without legislation like his, it could be another 16 years before SONGS can begin removing the spent nuclear waste off the site.

“Without a vehicle like this, without the ability to prioritize, we could be looking at the 2035-2050 time frame to actually begin the process of not just decommissioning, but moving the fuel off site, transporting to a different part of the country, whether it be an interim or a permanent storage facility,” he said.

President Donald Trump’s budget proposal unveiled last month calls on reviving the licensing process to make Yucca Mountain in Nevada a permanent nuclear waste repository. The project was stalled in 2010 during the Obama administration and has since been opposed by Nevada’s politicians.

Levin said a group of Congressional members are working to schedule a time to tour the Yucca Mountain site, giving them a chance to “listen to the people on the ground for a better understanding of what’s happening.”

Rouda said it was a failure to “put all our eggs in one basket on Yucca Mountain,” adding that “going forward, we have to identify more than one site to address where we’re going to put the spent nuclear fuel.”

While the new bill works its ways through Congress, a new SONGS task force Levin has been putting together will work to address a litany of technical and policy questions related to the removal of the spent nuclear fuel.

The task force, which is being co-chaired by Greg Jaczko, the former head of the Nuclear Regulatory Commission, and Rear Admiral Leendert Hering, Sr., is expected to convene “in the coming weeks and months.”

“Over the past several months, a very large number of applicants have asked to be on that committee, with both a technical background and a policy background, and in some cases, both,” Levin said.

Levin also touched on the Nuclear Regulatory Commission’s decision to propose fining the operators of SONGS $116,000 over an incident that occurred while loading a spent nuclear fuel canister back in August.

“I appreciate the work (Southern California Edison is) doing to address flaws in the operations to allow a canister-loading incident to occur in the first place,” Levin said. “That being said, I remain convinced that stronger oversight by the Nuclear Regulatory Commission (NRC) is needed at this facility.”

Levin said he’s been monitoring the NRC’s action regarding the incident and has urged it to consider taking additional measures to “prevent future safety violations.”

“Ultimately, the safest thing for our region is to move the nuclear waste at SONGS to a site that is not surrounded by millions of people and threatened by earthquakes and sea-level rise, and I will continue to work with local and state and federal stakeholders on long-term solutions toward that goal,” he said.