On Life and Love after 50: Searching for Famed Penguin Glen Miller

In the 1940s, the song “Tuxedo Junction” was the name of a No. 1 hit by bandleader Glen Miller. In a four-year period, Miller had 23 number-one hits, more than Elvis or The Beatles. On Dec. 15, 1944, during World War II, while Miller was in Europe entertaining our troops, his plane disappeared over the English Channel.

In 1984, the San Francisco Zoo opened a temperature-controlled enclave to house 69 Magellanic penguins that had come from the Patagonia area of Chile. The zoo named the aquarium, “Tuxedo Junction,” as the penguins looked to be wearing natural formal wear.

To help the zoo pay for “Tuxedo Junction,” the San Francisco Chronicle newspaper sponsored a contest to name each penguin. For $50, readers could send in a penguin name, and if the name sent in was chosen to be one of the top 50 names, a plaque with the penguin’s name and the person’s name would be put up at the aquarium.

I entered the Chronicle’s contest. My penguin’s name: Glen Miller. It was one of the 50 winners.

Now, 33 years later, my partner Greta and I are on a cruise through Patagonia, the most southern part of the world above Antarctica. We have traveled through Chilean fjords, seeing multiple glaciers and snow-capped mountains.

On Saturday, our ship docked in Punta Arenas, Chile, which is two hours away by boat from Magdalena Island, where the Chilean Natural Monument, “Los Pingüinos,” (the Penguins), is located.

Greta and I decided to take a tour there to search for penguin Glen Miller, or at least one of his relatives or descendants. Only 30,000 people visit there each year.

We boarded the ferry boat Melinka, for the two-hour ride to Magdalena Island, where 120,000 mating Magellanic penguins reside from October to February. We were bundled up—winter coats, gloves and Greta even wore earmuffs (with little penguins on them). The temperature was 40 degrees Fahrenheit. But on the Straights of Magellan, where the island is located, the wind chill was near 25.

As the Melinka approached the island, there was a buzz among the passengers. We could see penguins walking around on the land. People were excited. We had been briefed by the boat’s personnel to stay on the designated paths and to not touch or feed the penguins.

“Just let them do their thing,” we were told. “Do not use the flash on your camera under any circumstances, as it affects their vision.”

Greta and I stepped ashore. I said, “How are we going to find Glen Miller among 120,000 penguins?”

She said, “A better question is, ‘How are we going to get close enough to one so we can get a photo of you standing near it?’”

That photo-op happened within minutes. I was convinced that Glen Miller’s cousin was staring at me. Greta snapped the photo. Our mission in traveling to the southernmost part of the world had been accomplished.

Our stay on the island was one hour. With numb fingers from the cold, we snapped lots of penguin pictures, as we walked a half-mile up a hill to the monument lighthouse.

Before we knew it, we were back on the boat returning to Punta Arenas. The five-hour journey was well worth our time.

And what became of Tuxedo Junction at the San Francisco Zoo? It’s now the largest captive magellanic penguin colony in the world and is called Penguin Island. Many penguins have been born there and shipped to other zoos.

Greta and I felt very blessed to visit their native land. 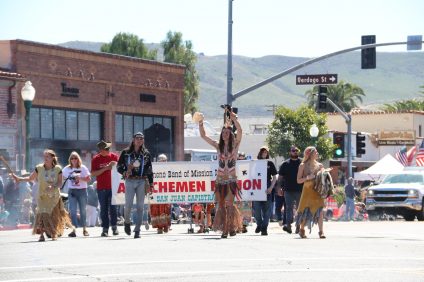