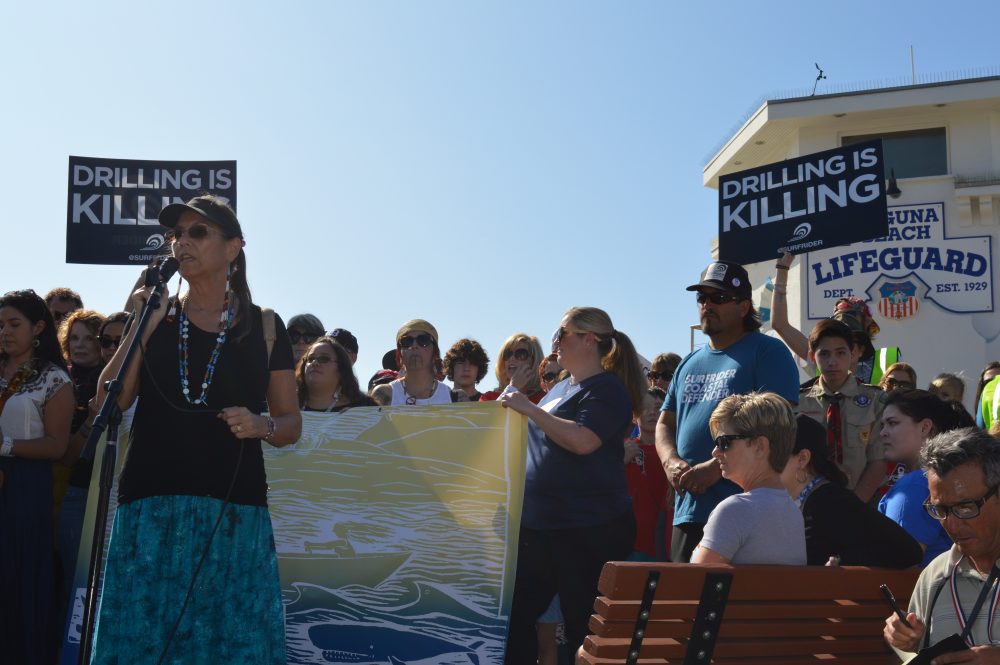 Although it’s been 200-plus years since the Acjachemen’s land was acquired by European settlers, local tribes have joined together to continue the battle to preserve Southern California’s lands and ocean.

Angela Mooney D’Arcy, Acjachemen and executive director of Sacred Places Institute for Indigenous People, is on a mission to protect sacred places and native culture. On Feb. 3, D’Arcy was one of the main speakers at a Laguna Beach protest that drew hundreds from the region to oppose a proposal from the Trump administration’s Department of Interior (DOI) to open offshore drilling in U.S. waters.

“We as the Acjachemen people, along with all of our relatives up and down the coast, have been protecting these coastlands and keeping them beautiful and sustainable for all of you for thousands of years,” D’Arcy said to the crowd, brandishing multicolored protest signs. “So thank you now for getting on board with sustainability.”

D’Arcy was one of several Native American activists at the Laguna Beach protest, an example of a growing pattern of the “turning of the tide” for activist groups such as environmentalists banding together with the Native American community, said Dina Gilio-Whitaker, policy director and senior research associate at the Center for World Indigenous studies. In South Orange County, the members of the Acjachemen, along with other neighboring tribes such as the Tongva, are making themselves heard in current, local politics.

Well-known San Juan Capistrano-based Adelia Sandoval, cultural director and spiritual leader of the Acjachemen, was engaged in activist movements such as the 2nd Annual Women’s March in Santa Ana in January, in addition to local environmental issues. Sandoval’s approach to discussing these tough issues is what she refers to as “sacred activism,” taking a positive-action approach to gather and express beliefs in a factual, healthy way.

“I think the voices of the indigenous people of this land—by tradition and teachings that have been passed down through generations—is to take care of the earth. That’s our responsibility,” Sandoval said.

With events such as the Standing Rock Sioux Tribe’s protest against the Dakota Access Pipeline, which drew thousands of people to North Dakota in 2016, the teaming up of Native Americans with environmentalists is a necessity, Gilio-Whitaker said.

“(Some activists) have often pitted themselves against Native American issues because they’ve completely lost sight that the U.S. has been founded on imperialism and indigenous land possession,” Gilio-Whitaker said. “Environmentalists and native activists have begun coming together—not just in California, but all over the country—as the awareness of environmental issues, especially with climate change, (grows because) everybody’s at risk now due to the intensification of corporate greed.”

A San Clemente resident and avid surfer, Gilio-Whitaker has focused her work on the relationship between environmental issues and indigenous studies, and has been involved in other local issues such as the toll road proposals. Gilio-Whitaker, who derives from the Colville Confederated Tribes of Washington, also spoke up at the Laguna Beach protest.

The protested oil-drilling proposals would allow for five-year leases from 2019-2024 for oil and gas exploration and extraction. Most of the areas mentioned in the proposals are along the outer continental shelf of the U.S. Among Native American representatives at the protest, members of the Surfrider Foundation and Oceana were also vocal against the oil drilling.

In congregation with Native American activists amplifying their voices in environmental and social justice issues, the awareness of the tribes and people themselves is also growing as a result. For instance, the recently released Acjachemen Indians of Orange County Community Story Project by Orange County Public Libraries, is the first extensive educational, community-outreach effort for the general public to get to know the history of its local tribes.

The project is a culmination of studies by Cultural Anthropologist Stephen O’Neil and a video series of interviews with descendants of the Acjachemen tribe. O’Neil has worked extensively with Acjachemen families in San Juan Capistrano and surrounding areas since 1978.

“It’s not that there used to be (Native Americans) here, or they did live here, or that it was a village site,” O’Neil said, following his lecture about the project on Jan. 30 at the San Juan Capistrano Library. “They are still here in the present, not just the past.”

Of the 3 million or so people in Orange County, roughly 3,000 identify themselves as Acjachemen. “We’re Still Here” is the message of the video-series project, and a recurring theme from the messages of Native Americans nationally and locally.

“In response to various things that have happened with the mission in San Juan Capistrano, sometimes administrations and people aren’t necessarily ready to listen,” D’Arcy said. “But I think the Acjachemen have been working to engage and make sure people know who we are.”

Although inclusion of Native Americans is progressing, D’Arcy stresses that the voices of the Native Americans need to be on the table in regards to environmental issues. After all, the natives have been here protecting these oceans and land for thousands of years, she said.

“I hope that more people come to understand that when you’re talking about environmental justice that native nations need to be included in that conversation,” D’Arcy said.

Sandoval echoed D’Arcy, adding that if actions such as offshore drilling off of the local coast take place, many things are at stake. Not only are there concerns for oil spills which could harm the ocean and its inhabitants, but the degradation of the local Native Americans spiritually and culturally.

“Anything that could affect (our local environment) in any way, we have to stand up for,” Sandoval said. “It’s our call. We are the first people here and we have to work with the community too, we can’t do it ourselves. We all need each other.”