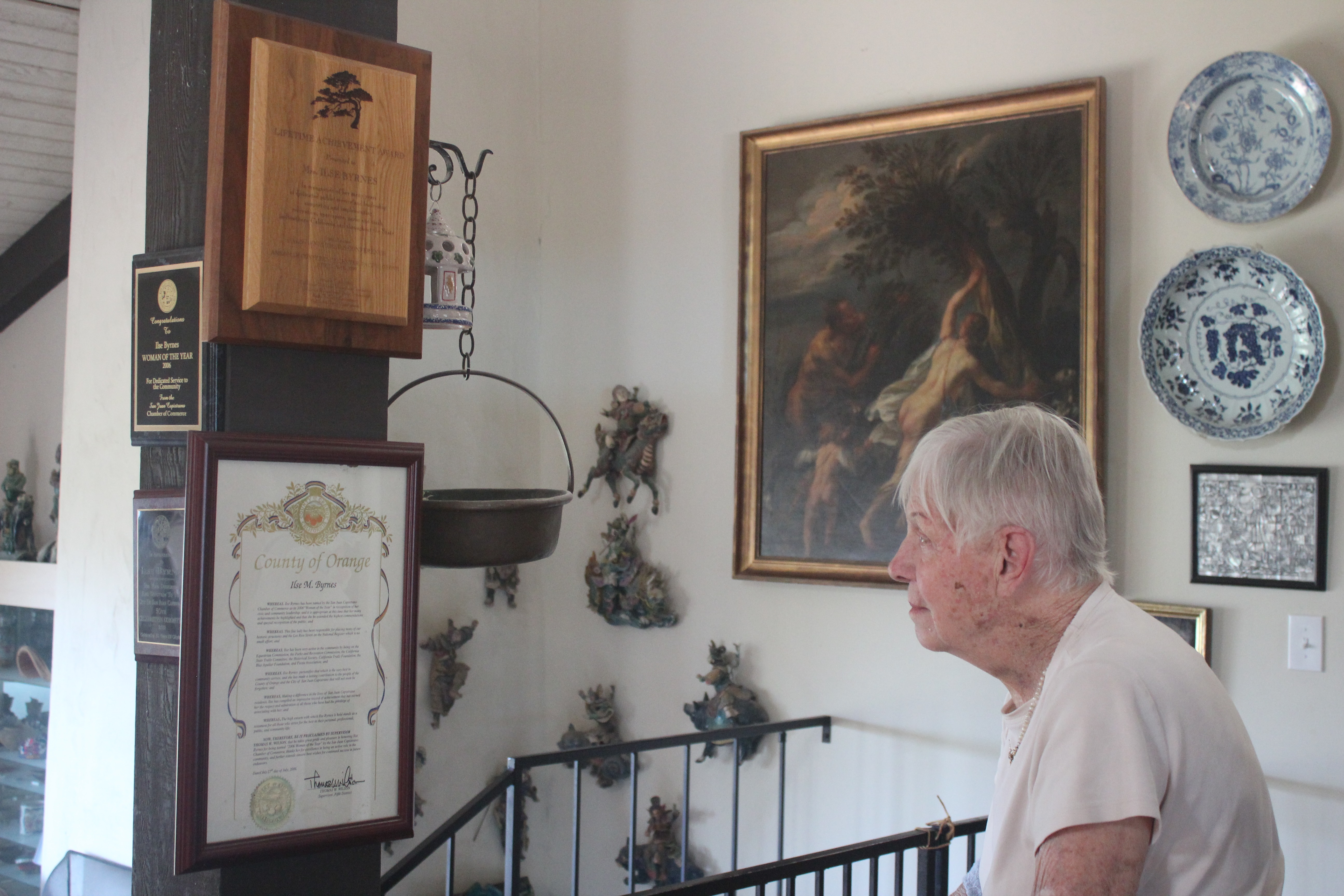 Those who have taken a trip to the Montanez Adobe on Los Rios Street recently may have noticed that a familiar face was missing there: Ilse Byrnes, a longtime docent at the adobe, recently “retired” from her volunteer role there after many years of sharing the building’s history with visitors.

After some health issues, Byrnes decided it was time to hang up her hat and give being a docent a break, but she said she plans to still help with historical preservation projects as needed.

People who have worked with Byrnes in her docent role say they will miss seeing her infectious enthusiasm for the area’s history on a regular basis.

Lorie Porter, director for the Montanez Adobe, said Byrnes would show up to her volunteer shift at the adobe every Saturday for the last 10 years at least.

“She has loved doing anything historical,” Porter said. “She said the Adobe was her home away from home.”

She said Byrnes would enthusiastically greet anyone who came into the adobe and start telling them about the building’s history. Those visitors loved it.

“With her accent, which is wonderful, and her easy way of talking to people it was more like, instead of a tour guide, somebody sitting down with someone who was interested and just sharing what our town is like,” said Porter.

Byrnes’ work at the adobe is just the latest in a string of things she’s done to honor and preserve the area’s history. She’s responsible for getting many of the city’s historic buildings on the National Register of Historic Places, including all of the Los Rios District.

Other key projects that Byrnes had a hand in preserving include the Constable Carl Stroschein House, the Richard Egan House and the Domingo Yorba Adobe.

Born and raised in Switzerland, Byrnes moved to Los Angeles, where her uncle served as Consulate General of Switzerland. She later married Roy Byrnes in 1954.

By the late 1960s Byrnes and her husband were living in San Juan Capistrano and she became actively involved with helping members of the historical society preserve the area’s old structures.

“Number one, I’m from Europe and historic preservation is very strong-going,” she said “I saw too many old buildings here in town that were old but interesting, but they were bulldozed down from the Mr. Developer and that sort of got me involved too,” she said.

Porter recalled that in those days there weren’t any agencies actively working on preserving the area’s historic structures so it was Ilse that was paying all the fees and postage necessary to get sites certified as historic.

Byrnes has since become a well-known and respected figure in the community, but when she began her preservation efforts, she was initially met with suspicion and concern.

Such was the case in the Los Rios District. The homes within the district are where workers who helped to build Mission San Juan Capistrano lived. Many of the families who lived there by the times Byrnes’ started preservation efforts were the descendants of those workers.

Jerry Nieblas, a lifetime resident of San Juan Capistrano and a member of one of the historical families, said he remembers the tension when he was young.

“I would hear my grandmother talk about this Ilse Byrnes and they were very suspicious of Ilse Byrnes; she came in like a quiet little breeze and no one knew what was going on,” Nieblas said. “But she was working behind the scenes, not blowing her horn, to protect and to preserve our adobes, and then after the fact — when it was all over and done with — everyone was proud and it was Ilse who was responsible.”

Nibelas noted when he walks around town he can see Byrnes’ efforts everywhere.

“When I look at a historical land or one of our historical trails, every single time I think of certain individuals in this community who are responsible for that still being there,” he said. “She’s in the top 10 list.”

Asked if she had a favorite historical preservation project, Byrnes said she didn’t.

Since Byrnes has left other volunteers have continued to carry on the docent torch, but Porter said there hasn’t been anyone quite like Byrnes.

“Many times, our docents know that, including myself, we will kind of wait to see if people are really interested,” Porter said. “If they just want to walk in and out then that’s fine. But she would go right up to them and start talking. She wanted them to know the history.”

Asked whether Byrnes’ semi-retirement will have a big impact on San Juan Capistrano, Porter said it will.

“It definitely will,” she said. “She is the one who put all of our historic buildings on the national register. If we hadn’t had Ilse, I would guess some of those buildings would have been torn down for sure.”

Byrnes said that while she won’t be doing her regular docent work on the adobe, she still plans to continue nominating old structures to be put on the National Register. She said she hasn’t completely said goodbye to the adobe either.

“If there’s an occasion where they need me, I’ll be more than happy to go,” she said.