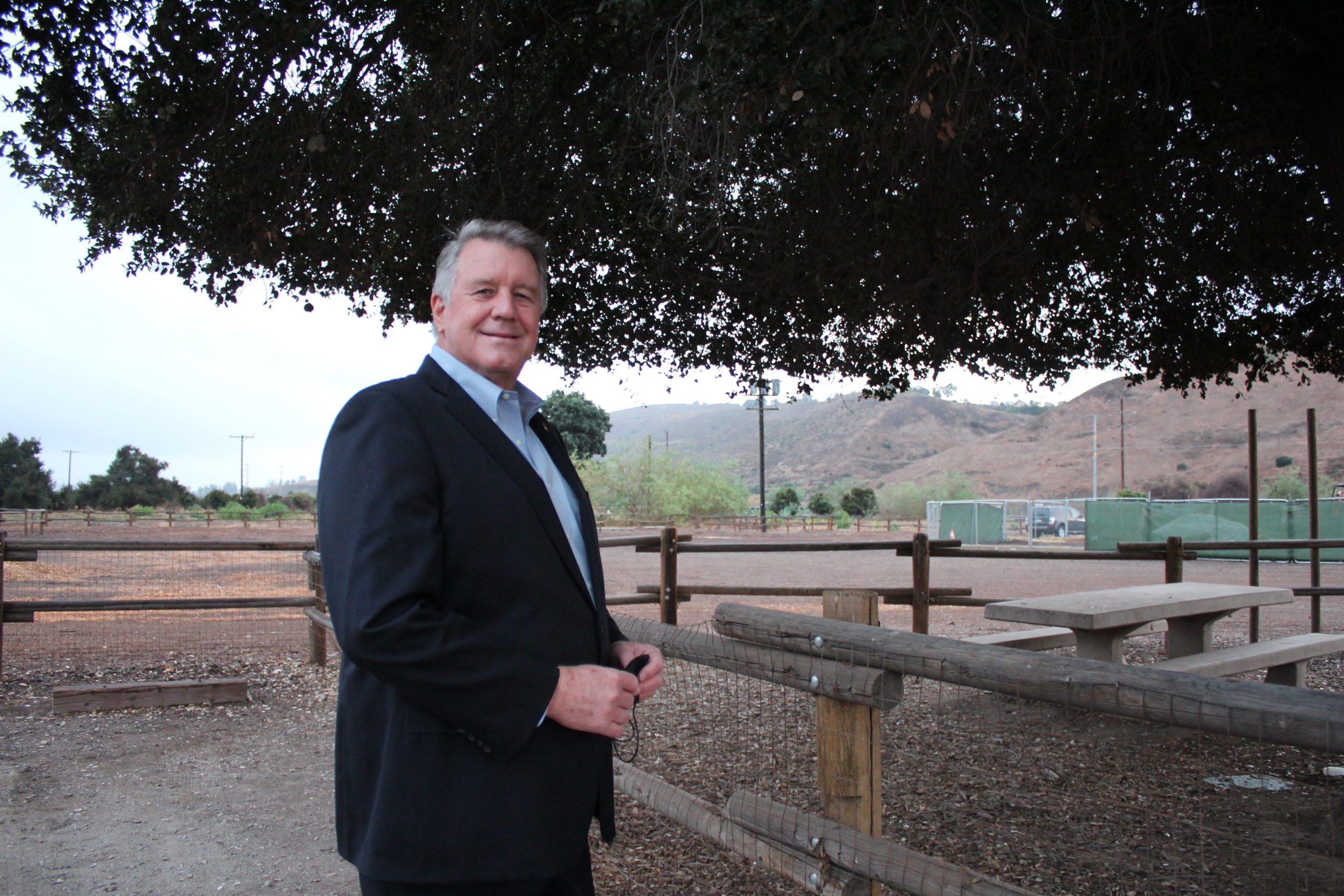 The most important thing for San Juan Capistrano in 2021 is getting businesses and citizens back to being fully healthy, after the COVID-19 pandemic ravaged the town and world in 2020, Mayor John Taylor said.

“When I became mayor, I had a real positive feel for what’s coming up in the new year with the vaccine,” Taylor said. “That’s a good thing—getting everyone vaccinated, and back to health and back to business.”

The COVID-19 vaccine is expected to be widely available for the public throughout this year, and it is already being gradually distributed to frontline health care workers, senior living residents and public officials. It is hoped people will be able to congregate face-to-face again after they get vaccinated and herd immunity is achieved, though time will tell.

Taylor expects people will head back downtown to enjoy the area’s restaurants, bars, and shops once it’s safe to do so. The downtown corridor, usually a popular area for locals and tourists, has practically been a ghost town during state health restrictions.

“People come to San Juan because it’s got a small-town feel,” Taylor said. “It’s got a town center, which a lot of places don’t. Parking is kind of a pain, but hopefully there’s going to be some of that corrected. The new parking lot in Los Rios is helping out with that.”

On the economic front, Taylor favors doing whatever the city can to help local businesses, including allowing quick and easy access for outdoor dining space.

Taylor spoke about the city’s future with The Capistrano Dispatch while at the Northwest Open Space, where Putuidem Village is expected to finally open in 2021 after years of discussion and anticipation. The cultural village paying tribute to the area’s indigenous Acjachemen people is under construction and currently fenced off.

Putuidem Village will include a presentation area with seating, a discovery trail, shade trees, and various depictions of Acjachemen culture.

“Seeing the completion of Putuidem will be wonderful,” Taylor said. “The people have been waiting so long for something to call their own. It’s really going to be an important asset to the Acjachemen people, the first people of our valley. I just think it’ll grow and improve over time, and give people who don’t know the Acjachemen people more knowledge about who they were.”

Taylor also mentioned San Juan’s long-awaited skateboard park, which will be on a portion of city-owned land near the San Juan Capistrano Sports Park and Community Center. It is expected the city will hire a designer and settle on a design contract in 2021.

Taylor also expects housing projects to move forward, such as The Farm and the Tirador Residential Project. The Farm is located along Del Obispo Street near Armstrong Garden Centers and will be a gated, 169-lot residential subdivision featuring one- and two-story, single-family detached homes spread over 35 acres. There will be a maximum of 180 residential units.

“It’s a beautiful project,” Taylor said. “It’s got a farm theme, farm-style houses. It’s going to have a big trail going through it, with a public park in the center of it, which will be accessible by foot for people who are hiking through to go to the sports park—to go to the skate park, let’s say.”

Lennar Homes is developing the community, which has drawn criticism from some San Juan residents over expected impacts to traffic and overdevelopment.

Tirador—which Taylor said is “probably a little more affordable”— will be a gated residential community developed by Watt Communities on a 16.1-acre site at 27000 Calle Arroyo. It is down the street from the Ortega Equestrian Center, and next to a 24 Hour Fitness.

The city’s gateway project—which will spruce up the city-owned southwest corner of the Del Obispo Street/Ortega Highway corner to complement Inn at the Mission San Juan Capistrano—also is expected to be wrapped up.

Right near that intersection is the Camino Real Playhouse site, which is planned to be developed into commercial retail space by Almquist and his company, Frontier Real Estate Investments. Almquist has worked with Playhouse staff and others on securing a new theater site in San Juan, likely to remain in the general El Camino Real corridor.

“We’ve seen (the commercial development plan) a couple of times now,” Taylor said. “The planning commission has reviewed it a few times. There are lots of really exciting things in store for us.”

Asked how the city’s finances look heading into 2021 after the economic impacts of the pandemic, Taylor said the situation is a struggle. City staff and officials anticipated a loss of revenue from the outbreak, and city staff were furloughed for the last two weeks of 2020.

“You go to bed and say, ‘I want to add something,'” Taylor said. “You better find out where is the money coming from. Finances are going to be tight, but the good news is, I believe, that there’s going to be a pretty quick rebound. Pent-up demand is really going to be strong.”

The city will be careful with spending, but overall is financially stable and has reserves, which they prefer not to use, Taylor said.

Taylor further pointed to San Juan’s annexation into Santa Margarita Water District, after the city council approved a utility annexation agreement with the district in January 2020. The agreement still has to be approved by the Orange County Local Agency Formation Commission.

“Santa Margarita will supply us (with water),” Taylor said. “That’s a good thing, because they have much better finances and a stronger organization. That’s a good move strategically for our city, because either that or we would have to come up with higher rates to cover infrastructure costs, and that makes people upset.”

As for public safety, San Juan has hired a private security firm to patrol the Los Rios District and Verdugo Street seven days a week because of concerns that have been raised about safety and homelessness. During the first two weeks of a contract the city signed with CitiGuard Inc. to provide surveillance and safety services—a $50,000 agreement approved by the city council during a Dec. 7 meeting—two uniformed officers patrolled the area from 4 p.m. to midnight Thursday through Sunday and one officer from Monday through Wednesday. Since Dec. 24, one officer has been patrolling the area daily, and the city has specific options in the contract to renew services based on performance and budget availability.

The city will be reimbursed for a portion of the security costs by the owner of Franciscan Plaza parking structure, according to a staff report.

“He’s an armed security guard,” Taylor said. “It makes everybody feel a little more confident in parking there at night and walking through the park.”

This will also mark the first full year on the city council for new councilmember Howard Hart, who transitioned into the role from a spot on the city’s planning commission after winning the November 2020 election. Taylor and other councilmembers endorsed Hart.

“Howard’s a great guy,” Taylor said. “I’m in Rotary Club with him. Service above self is our motto. His thing is service first. That’s what he’s all about, serving the community. It’s great to have him on council with us.”

Taylor feels confident with the current council in place for the next couple of years, given their camaraderie.

“We disagree on things sometimes, but we work it out,” Taylor said. “It’s a civil exchange, and that really makes things so much easier for the staff. We have a great staff, and we encourage them to do well, because you respect them and you know they’re doing the best they can. They’ll do anything for us.”

Taylor encourages citizens to reach out to others, particularly local small businesses.

“If you have a choice and there’s a place in town that you can buy something, please do,” Taylor said. “The poor restaurants, they put all this money into the outdoor dining and now they can’t even do that. And I understand why.”

Taylor plans to hold trail walks on the first Saturday of every month, if citizens want to directly discuss community matters with him. The walks will start at 8 a.m. at the Patriot Flag Hill. Taylor held the walks during his previous term as mayor in 2013.