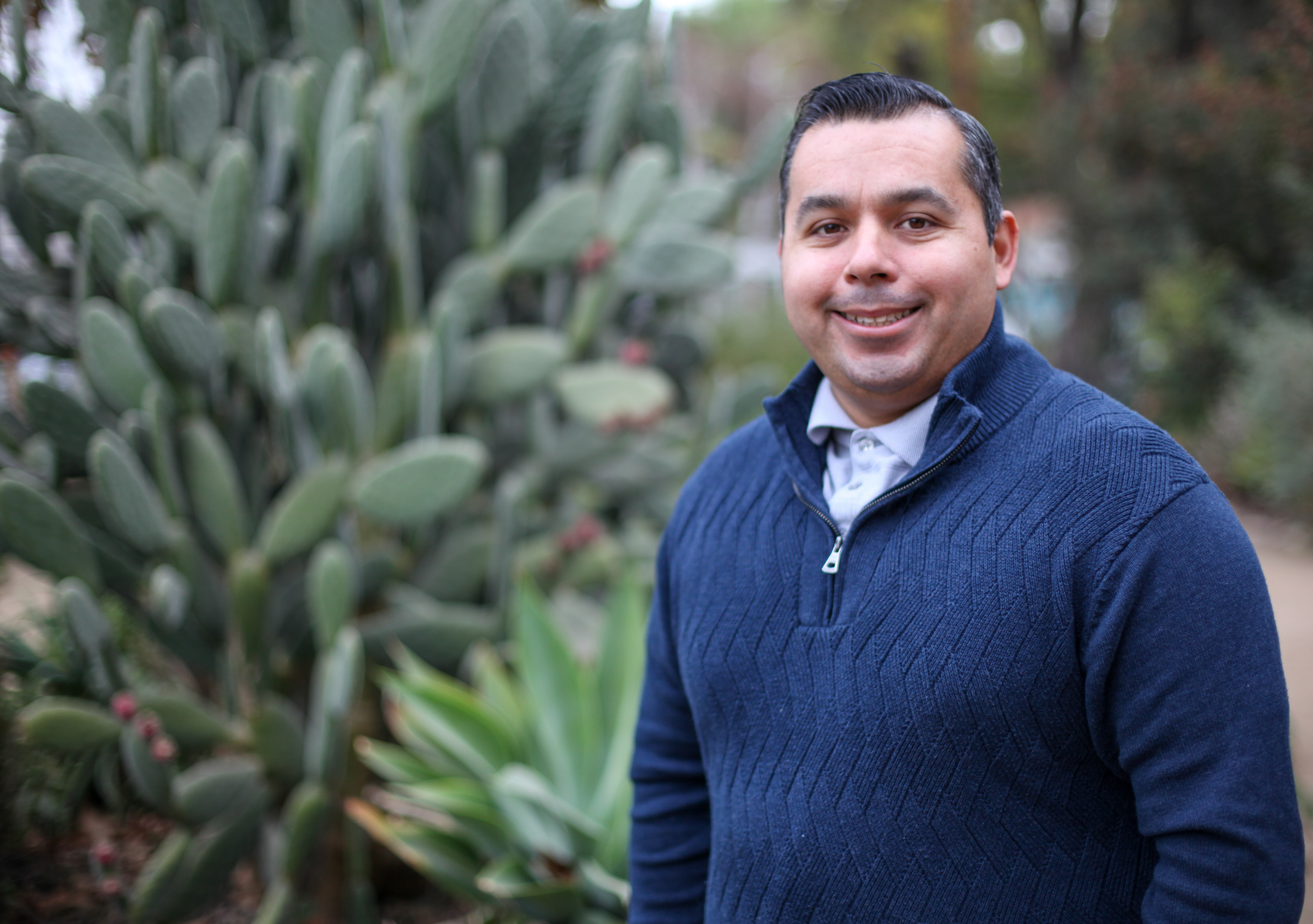 Each year we take the time to look back on the biggest stories of the year, so it’s only fitting that this month we look ahead at the year to come in San Juan Capistrano. The Dispatch sat down with San Juan’s newly-appointed Mayor Sergio Farias to get his take on the city’s most pressing issues in 2018, and to find out which projects he’s focused on tackling in the months ahead.

After Farias was appointed mayor on Dec. 5, he began his term by speaking about the importance of moving the city forward and exploring new economic opportunities while also honoring San Juan’s past.

When we sat down with Farias, he pinpointed what he views as the three most important issues facing San Juan Capistrano over the next year and beyond—tackling litigation and limiting the city’s exposure to litigation, addressing the city’s structural deficit, and improving residents’ quality of life, especially when it comes to traffic and parking issues.

“Being under litigation is obviously never a good situation,” Farias said. “I think the state exposes us to a lot. Trying to work through it all and limit our exposure in the future is a priority. We were able to square away two lawsuits this past year, and hopefully we’re able to get rid of a few more this year and avoid more in the future.”

Farias said that while some lawsuits stem from people not working with the city in good faith, others are more preventable and can be allayed by City Council members responding in a disciplined and appropriate matter to certain situations—something he hopes to see more of this year.

When it comes to tackling the city’s structural deficit, Farias said it’s important for City Council members to foster the city’s economic vitality by encouraging new businesses to come to town.

“We don’t get to dictate what people do with their private property, but we can encourage business to come into the city,” Farias said.

“I think the Verdugo Street project is something we can do on our end,” Farias continued. “If you look at Verdugo Street, the private property looks beautiful; it’s really the public portion that needs help. The City Council moving forward with that project is really important because public works get more expensive every year, so the sooner we get it done, the better. There’s a lot of money there now, but three years from now that may not be enough money to get it done.

“That’s the sort of thing we could do to say that San Juan Capistrano wants to invite investors to bring their businesses to the city and hopefully generate extra revenue,” Farias said.

Farias also mentioned working on the city’s sign ordinances, which he said Councilman Derek Reeve has been advocating.

“It’s important because in many places, we are not compliant,” Farias said. “I know this is controversial in many political factions, but I think that trying to work with our car dealerships, easing some of the sign ordinances for them, would be important. Allowing our car dealerships to put up more signage and attract more customers is something that could be done easily and could increase revenue quickly.”

Farias also mentioned that the addition of Ganahl Lumber on the city’s Lower Rosan property would help reverse the deficit, as well as getting the city’s two incoming hotels processed. In addition, Farias suggested better utilizing San Juan’s parks and venues for monthly festivals and events that would introduce new visitors to local shops and restaurants.

“We have the weather to have festivals at least every month,” Farias said. “That is at a cost to the city sometimes, but I think finding ways to pay for it would, in the long run, return more than it costs us, because it makes us a destination.”

As for addressing quality of life issues like transportation, Farias said he’s glad that the city is beginning to resurface and restructure the roads of the Capistrano Villas neighborhood, many of which haven’t been worked on since they were built.

Farias also advocated for improvements at the intersection of Los Rios Street and La Zanja Street and said he’s excited to see that come to fruition with an island and an extra light post to improve visibility and give pedestrians a rest at the crossing. Farias said residents have been asking for a light there for years because the intersection slopes down and decreases visibility.

Farias added that understanding traffic counts is important for the Council. After seeing the success of the La Novia roundabout this past year, he hopes to identify other areas in town where similar improvements to traffic flow could be made.

Farias said when it comes to processing development proposals—whether it’s the River Street marketplace, the impending hotels, the Northwest Open Space, or the redevelopment sites, just to name a few—his approach is to wait until studies are completed and evaluated to determine what the development’s impact will be, rather than acting based on “hearsay or opinions.”

“I like to use facts, data and traffic counts,” Farias said.

When asked about some Council members’ past comments that have expressed a distrust of staff’s work and analysis, Farias described those interactions as “unfortunate.”

“To not trust numbers and facts and figures…you’re not doing your job,” Farias continued. “I think public opinion and public input are important, the more input you get from residents, the better any proposal is. Having constructive dialogue is always important, but I think that when you get to the point where there’s another agenda…when it’s always critical and it doesn’t delve into facts, I think that’s where it becomes difficult. If someone is against a project, that’s their God-given right, especially if it’s going to impact them more so than it would others. But unfortunately, when you get into misleading and misrepresenting, I think that’s a problem.”

One of the first statements Farias made as mayor on Dec. 5 was to acknowledge that San Juan’s “equestrian lifestyle is at risk” and that the Council will “move forward in a way that will ensure that that will always be a part of this city.”

Farias’ remarks were in reference to a lawsuit and complaints that have been lodged against the Rancho Mission Viejo Riding Park at San Juan Capistrano and other San Juan stables by Orange County Coastkeeper. The advocacy group alleges that the Riding Park is violating the Clean Water Act.

When asked why showing that solidarity with equestrians is important to him, Farias answered with a question.

“If the stables aren’t there, what will be there? It’s probably going to be more housing and more commercial development,” he said. “And if housing and commercial development are going to replace the stables in San Juan, then there’s nothing that differentiates us from the rest of South County. It’s really important to me, and to the identity of San Juan Capistrano, to make sure that we have an equestrian lifestyle, because I think, even more so than the Mission, that it sets us apart. And it also gives us the ambiance of being a small town, more so than anything else.”

Farias could only say so much regarding the lawsuit against the Riding Park as it’s being discussed in closed session by the Council, but he did say he feels that current “state laws and federal laws allow cities and private companies to be exposed to litigation.”

“Obviously we don’t have someone on staff to work on lobbying, but I think that’s something that should fall upon Council members,” he said.

Another significant focus for Farias in 2018 is on the looming San Diego Gas & Electric (SDG&E) substation expansion, which is set to take place in his District 1 region of town. Farias said the nearly $400 million project is going to impact residents in a negative way, and his aim is to minimize those impacts and make sure SDG&E goes through the proper process and abides by local laws.

The California Public Utilities Commission (CPUC) approved the expansion last year, and in June, the Council voted in closed session to file a complaint in federal court against the CPUC. The CPUC denied the city’s request for a rehearing in September, and U.S. District Judge Andrew J. Guilford dismissed the city’s lawsuit in October. The Council then voted on Oct. 17 to appeal the U.S. District Court’s dismissal.

As the city enters the appeal process, SDG&E is continuing to do work at the project site that does not require city permits, such as surveying, brush clearing, soil borings and cleanup inside the old substation building. SDG&E does not yet have permits from the city to begin demolition, grading and construction.

Farias said city staff has done a good job of monitoring SDG&E’s progress to make sure they only do as much work as they’re permitted.

“If it unfortunately gets done, we need to make sure they respect the area as much as possible,” Farias said. “It’s a large project that’s going to have a large impact.”

His Role as Mayor

“I see the role as mayor as serving not only my constituents and all of the residents of San Juan Capistrano, but also serving my fellow Council members,” Farias said. “The role of mayor, as I see it, is facilitating the Council meetings. Doing the people’s business is my priority, and making sure that every Council member is heard and that items are discussed in a manner that everyone feels they can give their input.”

Farias said he plans on conducting Council meetings this year as efficiently as possible.

“We’re there to do the people’s business,” he said. “We’re not there to pontificate and talk about ourselves.”

When asked about how he’ll work to facilitate civil discussions in a chamber that can often become rancorous, Farias said he wants to encourage healthy debate and hear out different perspectives while weeding out the unnecessary vitriol.

“Differences are okay. I think where we go wrong is the personal attacks,” Farias said. “Allowing opinions to be heard and to be part of the process is important. But we need to be able to debate in a civil manner.”

Farias also promised “not to yell at residents,” alluding to incidents over the last year where residents were interrupted by the mayor during public comment.

“It just creates a negative atmosphere and intimidates people who have never spoken in public before. It’s not an easy thing to do,” Farias said. “You’ll have people in there who have never been to a City Council meeting and they see the mayor yelling at residents—it doesn’t set a good tone. I try to thank everyone who speaks, regardless of whether I agree with them or not. And I think that sets a different tone.”