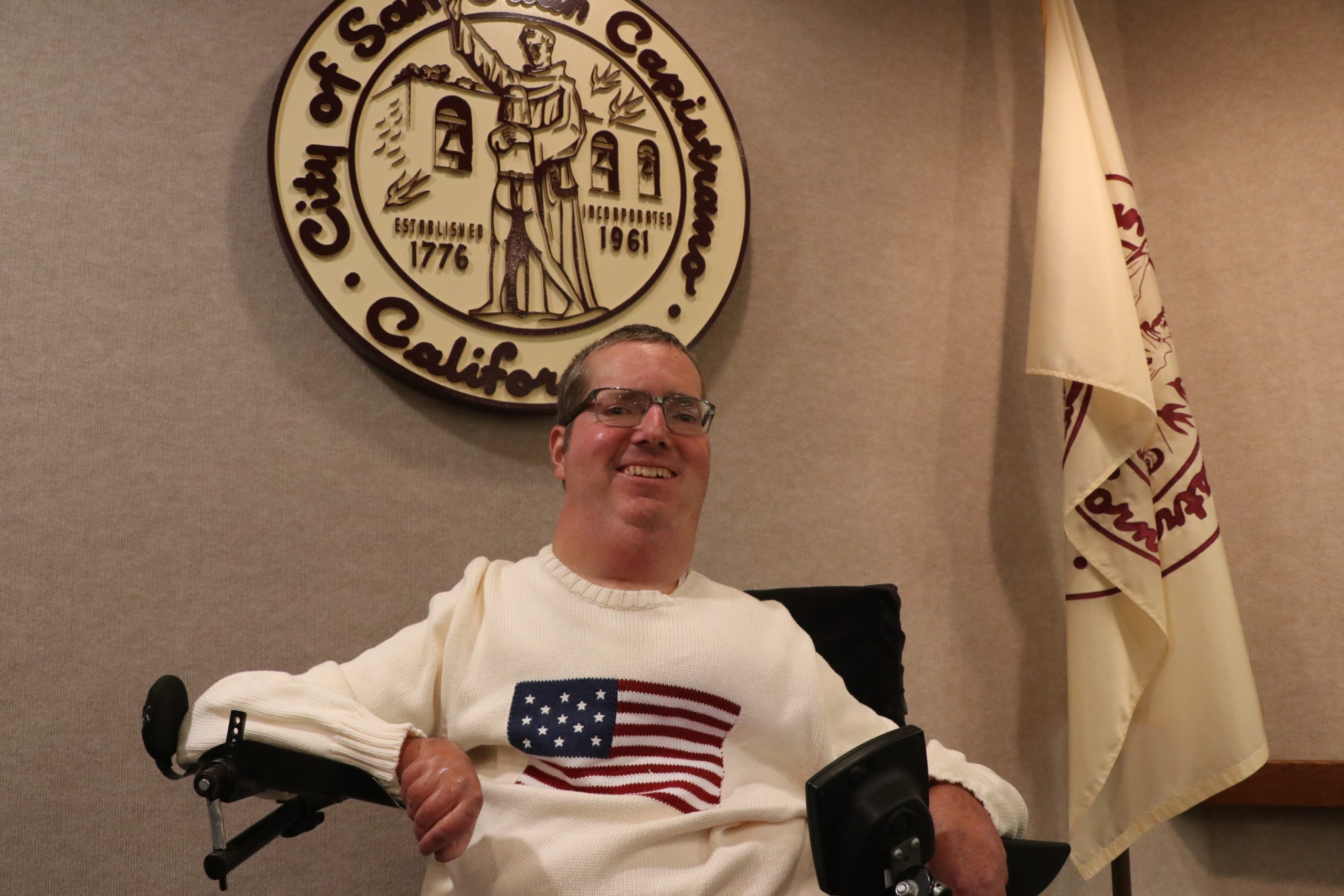 When considering what 2022 holds in store for San Juan Capistrano as the community continues to grapple with the COVID-19 pandemic, continuing development, and a slew of local projects and challenges, Mayor Derek Reeve brings up a quirky pop culture reference—“back to the future.”

Back to the future, meaning the town will still move forward—but with some familiar events in place that will hopefully be a good time for all.

One of the first events Reeve mentions is the return of the 62nd annual Swallows Day Parade, which as of now is still scheduled for March 12 following a two-year hiatus due to the pandemic. The parade season also means other events hosted by the San Juan Capistrano Fiesta Association, including Hoos’Gow Day, are back on.

“We’re going to bring back our Summer Nites Concerts that people love and participate in so much. We’re going to have a full four of those, as well as our Fourth of July celebration and our (Christmas) tree lighting again at the end of the year,” said Reeve, who just started his second term as mayor. “As many of those social aspects that we have if we can, those are what make San Juan Capistrano so unique. It brings pride to everyone in our community.”

Though San Juan undoubtedly faces policy issues that city leaders and staff are expected to address, focusing on community celebrations is important in the context of the viral outbreak and associated hardships, Reeve said.

“It’s been hard, because it’s been frustrating,” said Reeve, explaining what it was like to not experience the parade for the past two years. “We really wanted to do it last year and, of course, it’s out of our control. We tried to delay it, we tried to do it in another month in the summertime, but there’s a lot of coordination that goes on with it. The longer we waited, it got to the point that we might as well just wait until 2022.”

As for local projects on the horizon, Reeve mentions River Street Marketplace—an agrarian-themed retail and community center in the Los Rios Historic District currently under construction. Reeve said the center will be exciting for locals and visitors.

Reeve also drew attention to the Ganahl Lumer Company property along Stonehill Drive, which will house a future hardware store, lumber yard, and other business amenities. Escrow closed on the former city-owned property in mid-2021, at which time the company was prepared to start construction.

“It won’t be done until 2023, but that is actually a really historic landmark event in San Juan Capistrano,” Reeve said. “They had plans for that (property) for multiple decades, and every time we started to do something, something else would come up from the state or what have you that would just sort of (throw a) wrench into it.”

Other key issues on tap include a decision on a potential new In-N-Out Burger location on Del Obispo Street, which has drawn controversy from residents over a potential increase in traffic. In-N-Out wants to set up shop in the current Marie Callender’s building, which would necessitate a new drive-through lane at the property—and thus requiring the City Council approve a conditional and discretionary use permit.

The City Council could render a final decision on the contentious matter this year.

Reeve also pointed to the Rancho Mission Viejo Riding Park and Hillary and Robert Ridland, who are expected to continue as long-term operators for the park. The city elected to enter into negotiations with the Ridlands so they can stay on as head operators.

“I think we’re all optimistic we’ll be able to work out the details of that, but that really preserves the Riding Park, preserves an equestrian aspect in a critically important area of San Juan Capistrano,” Reeve said. “The thing that I really pushed was other items (in addition to) equestrian—such as concerts, big-name concerts, and making San Juan Capistrano an anchor for the entire county in terms of entertainment.”

For the local skateboarders, they can also rest assured the town’s long-awaited skate park near the Community Center and Ecology Center is scheduled to open this year. Reeve and his peers on the City Council have worked on the project for a while.

“This is something members of our community have been wanting for years,” Reeve said. “I think it’s going to be an outstanding contribution to the community. We’re really set on getting that built and kids skating on it by this summer.”

Scooters and BMX bikes will also be welcome at the skate park.

On a more divided note, Reeve did address the proposed change to the city seal—which would effectively remove Saint Junipero Serra from the seal. Councilmembers Troy Bourne and Sergio Farias have pushed for updating the seal, with a proposed design that features a swallow bird and Mission bell. The change has drawn strong reactions from people both for and against it, with some applauding removing Serra from the seal and others against it due to wanting to preserve history and honor Serra’s role in founding the town.

Serra’s legacy has come under scrutiny due to his role in the genocide of indigenous people, though Bourne has said the change is because the current seal featuring Serra and intricate designs does not show up well on a smartphone. A new seal could be adopted by the middle of the year, per council approval.

“It’s one of those things that we’ve discussed for years in what I describe as ‘offline’—meaning we’ve never had a formal discussion about the city seal, but I’ve heard people make comments about it,” Reeve said. “It made a lot of sense when the city was first established, but I think our perceptions of a number of issues have changed and evolved over the years. The City Council voted to adopt a new seal, but I felt very strongly it essentially canceled San Juan Capistrano history and culture. I’m going to be bringing it back to the City Council at the next meeting to have a discussion again and express the importance of our history of the Mission and of Junipero Serra and our Native American history.”

Reeve hopes to essentially keep the same current seal, but perhaps change out the current image (which has Serra with an Acjachemen child) for one of Serra with a Native American adult.

On the business front, Reeve said San Juan—particularly downtown—becoming a foodie hub with all the new restaurants opening in the past few years is exciting.

“We’re really encouraging it. Now, it’s hard with the pandemic. Restaurants have just been getting killed because of the pandemic, labor shortages, some of the additional regulations that may be required by the state,” Reeve said. “It’s really been difficult and challenging, but we’ve been really trying to be as facilitating as we can—allowing them to go out into sidewalks and parking areas to keep them going during these challenging times.”

The amount of investment in the downtown area is reason for optimism, Reeve said. City officials are expected to have more discussions on what will happen with current property at and near the current Camino Real Playhouse property, including a possible new performing arts center and a proposed apartment complex. Details on what happens with the Playhouse site could become clearer this year, and community input is still being considered with the apartment complex plans.

“Those are all things that we still have to play out, but those are all things in downtown that are exciting and worthy of discussion,” Reeve said. “The future of Orange County is right here in its past, and that’s in San Juan Capistrano.”

Other projects—more in the bureaucratic realm—that the city will tackle in 2022 include an update to its housing element (required every eight years by the state and intended to satisfy state housing requirements) and redistricting. The state mandates municipalities are able to prove they can provide housing for all varying income levels, generally through zoning regulations.

“That’s something we’ve been working on with the state and with our residents, and I think we’ve got a very good plan, but it’s going to be challenging every eight years,” Reeve said. “It’s a top-down approach. I understand the motivation of the state. They want to increase residential units in areas where, maybe, they’re not very popular.”

As for redistricting, city staff and officials will gather public input on the process (required every 10 years for every city that has district-based elections following census data) before adopting a final map in March. San Juan moved to district elections for the November 2016 election.

“This was something I supported—going to districts—but we just did this a few years ago, so I’m not expecting a dramatic change from our current districts,” Reeve said. “There might be a few streets that are on one district that maybe move over to another district, but even that is questionable.”