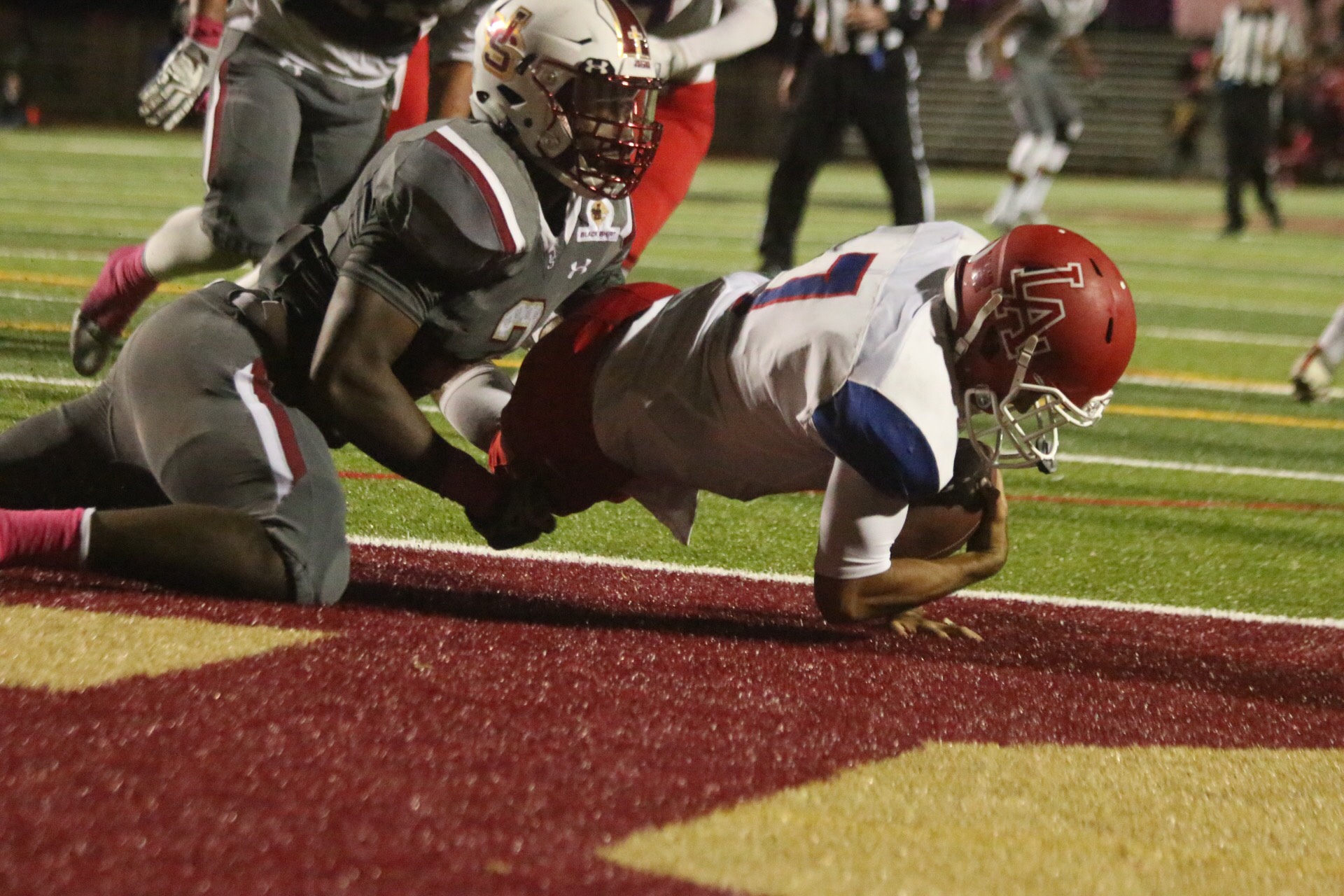 Malik McClain is a fast and physical player known for his pass-rushing, game-plan busting ability as a defensive end.

After Friday night’s nonleague game against Los Alamitos, the senior UCLA commit can now add the role of receiver to his resume.

McClain did it all against the Griffins. He caught a touchdown pass, had four tackles for a loss, including two sacks, and ignited a 32-10 JSerra victory.

McClain, who had just one reception his entire high school career entering the game, caught three passes for a game-high 117 yards.

The receiver in the McClain family is actually  his brother and teammate, Munir, who was nursing a knee injury and did not play.

“I’m doing it for (Munir). I don’t really play receiver so I was just trying to fill in for him and do whatever it takes to help the team,” McClain said. “I feel like I did alright.”

The 6-foot-4-inch defender-turned receiver surprised everyone in the stadium by taking a quick-out 79 yards for a touchdown on the Lions’ (5-0) third play from scrimmage to take a 7-3 lead.

McClain went on to have a huge first half, racking up two sacks, and his touchdown sparked a run of 32 unanswered points.

McClain’s first sack of Los Alamitos (2-2) quarterback Will Madonna, which brought an end to the first quarter, forced Los Alamitos to punt deep out of their own territory, giving the Lions the ball at midfield. JSerra stormed downfield in four plays and capped the drive off when receiver Tarik Lockett ripped a jump ball out of the hands of a Griffin defender in the corner of the end zone for a nine-yard touchdown completion and a 17-3 lead.

McClain sacked Madonna in his own end zone for a safety to put JSerra up 19-3 minutes later.

Rushing yards were hard to come by for both teams in the first half, but the biggest gainer on the ground came when TJ Medina ran for 38 yards on a fake JSerra punt. The play set up the second of kicker Jake Haggard’s two first-half field goals. Haggard’s second kick, a 32-yarder, gave JSerra a 22-3 lead at the half.

With a healthy lead, the Lions offered the Griffins defense a healthy dose of running back Al Fisher throughout the second half. The speedy, shifty back ran for a team-high 78 yards.

Haggard had a fantastic night on special teams. He boomed a 52-yard punt early in the fourth quarter, pinning Los Al at their own one-yard line. The next play, Calvin Mouisett intercepted Madonna and ran it back 12 yards for a touchdown to put JSerra up 32-3.

The second half was marred by penalties on both sides, however, bringing the momentum to a grinding halt. JSerra was hit with 16 penalties in the contest.

JSerra coach Pat Harlow said he was happy to get the win, but was frustrated all night by what he felt was sub-par officiating.

“Some of the penalties are on us. But some of them, that’s (the official’s) judgement, and I don’t agree with the judgement made,” Harlow said. “I’m telling our kids to go out there and play fast and free. Nothing cheap.”

Los Alamitos broke through for its first touchdown midway through the fourth quarter when Madonna burst for a one-yard score.