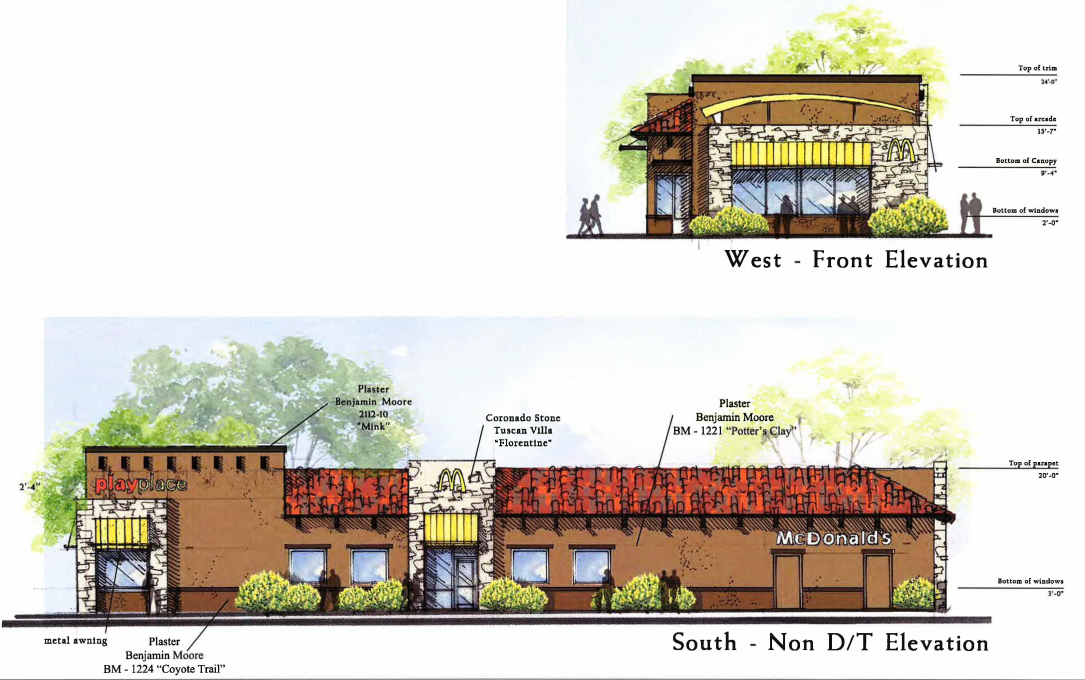 McDonald’s Gets a New Look

San Juan Capistrano resident and franchise owner Ross Pollard plans to demolish the current building, located at 31822 Del Obispo Street, and build a new restaurant with a Mediterranean and Mission Revival architectural style. Designs also call for a double-lane drive-thru and a drive aisle at the front of the property to allow traffic to circulate internally.

The long planning and review process drew criticism from council members, since plans were first submitted in June 2012. The council expressed concern regarding the “Ping-Pong” review process during its public interviews to fill the Planning Commission in May, which resulted in two new commissioners being voted onto the five-member body. In June, the council, specifically citing the McDonald’s project, also voted to eliminate the Design Review Committee in an effort to streamline the city’s review process.

“I want to thank Mr. Pollard for hanging in there all these years. I know he was tempted a couple times to walk away from the whole thing,” Councilman Larry Kramer said. “I think it’s been a long time coming.”

An initial design was rejected by the Planning Commission in July 2012 because it was deemed too modern. In February, the now-defunct Design Review Committee rejected a revised proposal over similar concerns. A third Pueblo-style design, which city staff found agreeable but was never formally submitted, was turned down by McDonald’s corporate. Despite lingering concerns, the Planning Commission approved the current design in October.

“As I walk around the city, I see different architectural designs, here and there. We’re not a planned community. I don’t expect everything to look exactly the same … I’m pleased the Planning Commission voted for this one,” Kramer said.

Former commissioner Rob Williams remained critical of the plans and said that while the DRC was poised to move the project in the right direction, the City Council did not support them and “barraged” the commission.

“The project before you is a very contemporary building and has no business at the gateway of the city,” Williams said. “It’s too bad, in a city with this kind of history, we have a council that doesn’t understand what it has and is willing to throw it all way based on not understanding. The beauty of our nation is that in less than a year, we can vote three new members in.”

Resident Steve Behmerwohld spoke in support of Pollard, saying he had “jumped through hoops for long enough.”

“It’s a McDonald’s. It’s not ever going to be the Blas Aguilar Adobe,” Behmerwohld said. “As far as it being the entrance to town, it’s a fast food restaurant. It’s not going to be the Metropolitan Art Museum.”