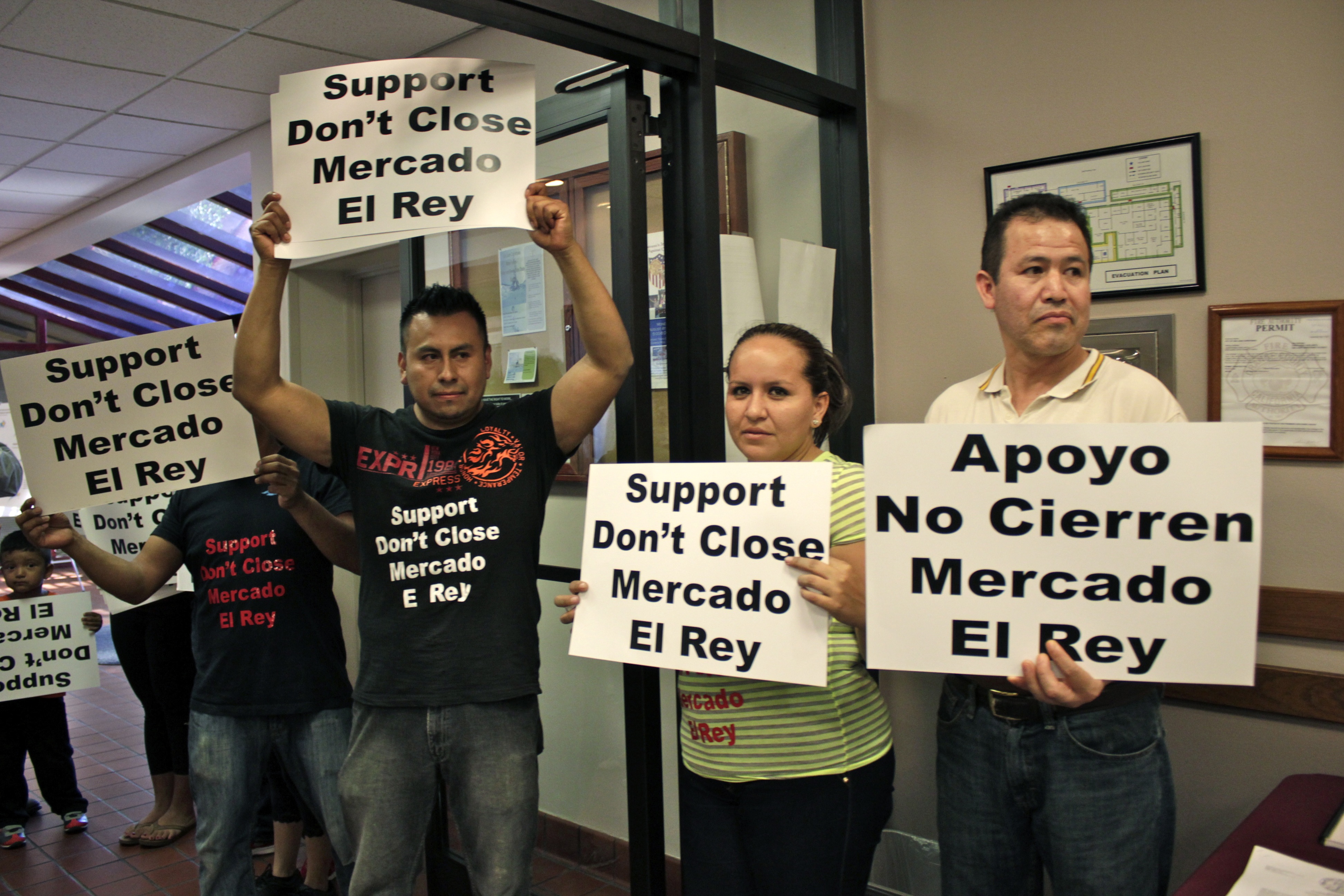 A popular Mexican grocery store on the brink of closure has bought itself more time but now must find a solution to alleviate its parking conflict with nearby businesses and San Juan Capistrano city code.

Mercado El Rey was under a court-ordered injunction to close its doors by Friday, August 1 if it did not receive a favorable decision for its permit to establish a shared parking plan by the San Juan Capistrano Planning Commission.

On Monday, the commission voted 3-0 to deny Mercado El Rey’s permit, but did so without prejudice, thus allowing the market and the property owner, Dan Malcolm, to come back to the city with a new request immediately.

The issue stems from a September 2011 decision by the City Council to approve Mercado El Rey’s permit, despite the Planning Commission voting against it that May.

Dan Friess, owner of Friess Property Investments, has a building and several tenants near the market. He objected to the council’s decision and sued, arguing that the market had insufficient parking and that delivery trucks obstructed other businesses. He said the market revealed in court that they had around 300 deliveries a month, despite telling the council they expected 12 to 16.

“The municipal code doesn’t allow commercial vehicles to deliver from public streets. While they’re doing that, they’re blocking the street. They also deliver from the alley and these are 75-foot semi-trucks,” Friess said. “They’ll block six parking spaces while they’re delivering. I’ll have tenants trying to leave, but they have to go find the driver.”

“Nobody is shutting them down,” Friess said. “All they have to do is comply with the municipal code and control the deliveries and then they can operate.”

The market received a temporary stay on the injunction Wednesday, according to Friess.

Mercado El Rey opened in December 2011, taking the place of the St. Vincent De Paul thrift store. In 1982, the thrift store received city approval to construct a rear storage area, and in 1991, they were allowed to enclose an existing car port for truck parking.

The market, however, began using the two areas for grocery store operations. Their permit requested establishing a shared-parking plan was submitted to address the additional space, but city staff found no record of the storage areas being approved as useable space.

“While the focus of this (court) case was parking, the outcome was a very clear indication that the 1982 and 1991 permits did not approve expansion of the St. Vincent’s building,” according to the staff report.

The city recommended denying the application because the resulting floor area ratio exceeded city limits, and conditional-use permits are legally required to be in compliance with general plans and zoning regulations.

Friess had argued the market could convert the outdoor storage area to six additional parking spaces.

“That was an illegal addition,” Friess said. “It removed six parking spots, but simultaneously, by using it as retail space, it created the need for additional stalls, leaving them 13 spaces short.”

Laura Hess, the attorney for the market, said they would be willing to convert the outdoor storage area back to its intended use but needed Malcolm’s approval. Gina Austin, Malcolm’s attorney, said she would need to get in touch with her client.

The Planning Commission was originally scheduled to vote on the item on Tuesday, July 22, but Commissioners Sheldon Cohen and Ian Gardiner were absent, and Commissioner Roy Nunn had to recuse himself because of a business relationship with Friess.

The meeting was continued to Monday, but Malcolm said the delay felt “a bit prejudicial,” since the market’s owners, as well as a crowd of employees and patrons, had come to the meeting in support. Malcolm told the commission he would be out of the country the following week, so he was allowed to submit a 15-minute video testimony.

Austin argued the commission could still consider the permit if they considered the full history of the property.

“If you look at this development over time, you’re looking at pieces of information,” Austin said. “What we have, at best, is a code violation … This conditional-use permit can be granted if there’s a code violation.”

Employees and patrons urged the commission to approve the permit, saying the market provided jobs and affordable, high-quality products.

“It’s very practical for us. We normally find many things that we use every day to cook, and it’s safe, it’s cheap, it’s good,” said San Juan Capistrano resident Juan Mendoza.

Commissioners said they would like to see the market and property owner come back with a plan to convert the outdoor storage area back to its original state.

“This is incredibly complicated and influences the lives of many. From where I sit, we’re all very pro-business and very pro-property rights,” Chaffee said. “I’m not comfortable at this time to approve this unless we can bring it back to (its original) state.”