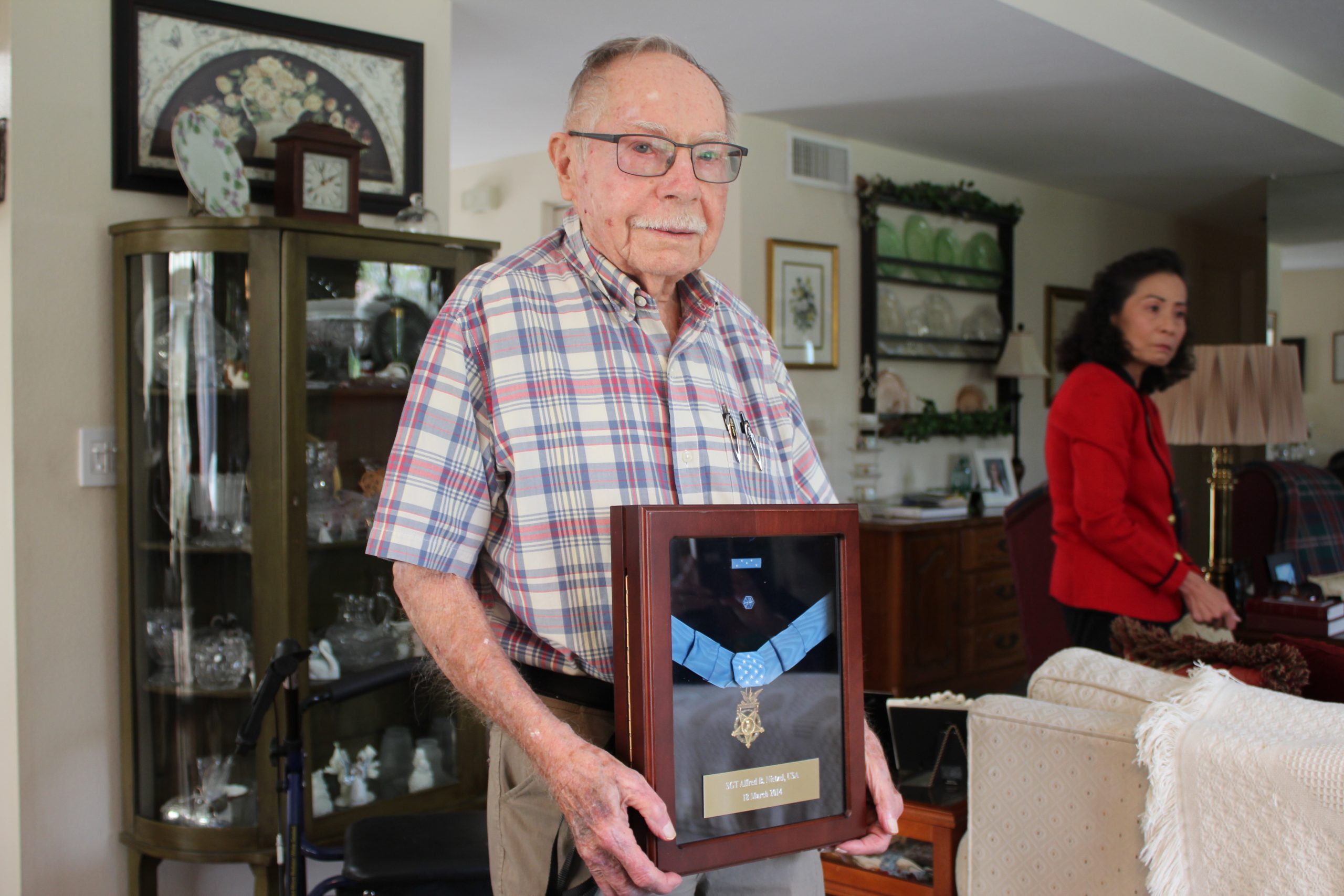 Robert “Bob” Neitzel is physically in the living room of his San Juan Capistrano home—but, mentally, he’s still in the Korean War.

Bob Neitzel, 90, cries when recounting the close encounters he had facing artillery fire during his two years of service in the war. He will receive a dedicated flag during the Field of Honor ceremony at Mission San Juan Capistrano during Memorial Day weekend.

Bob Neitzel is no stranger to military recognition, having accepted a posthumous Medal of Honor for his cousin and World War II veteran Alfred Neitzel in 2014 from President Barack Obama.

“It’s such an honor,” Neitzel said of getting the Medal of Honor on Alfred’s behalf. “To think what you do to earn the Medal of Honor … most people that are in the military get service ribbons for different campaigns they were in. That’s the highest award you can ever get.”

The Neitzel family was initially not even aware of Alfred’s relation to them until they got calls from the government about his service and the Medal of Honor. Bob Neitzel said Alfred was leading a company that was being overrun by German troops and running out of ammunition.

“He sent them all to the back lines,” Bob Neitzel said. “He stayed and held off the overrunning German troops until he was either killed by a grenade or hand fire … but, boy, that takes guts.”

Bob Neitzel associates those experiences with his own in the Korean War since he was also overrun by enemy troops, a time he calls “no picnic, either.”

“I was able to dodge more bullets than him,” Bob Neitzel said.

Regarding the trip to Washington, D.C., to receive Alfred’s medal from Obama, Bob Neitzel said the military guides and escorts showed their group highlights of the nation’s capital. He went to the Korean War Veterans Memorial while in Washington.

“All I can do to sum up Korea is that was a cold goddamn place,” Bob Neitzel said. “The only memorable thing you got was, every 30 days, you got a chance to come back in the front lines and get a shower in a dirty truck.”

Bob Neitzel served as a high-speed radio Morse code operator in the 24th Infantry Division. His entry into Korea was in a tank landing ship that was sinking and had two feet of water by the time they got to the beaches in Pusan.

“I thought I was going to drown before I was being shot, but we made it,” Bob Neitzel said.

“It’s about people like Bob telling his story,” co-founder Mamie Yong Maywhort said. “It’s about the faces behind each flag. That’s really what Field of Honor means to me.”

Field of Honor is intended to educate younger generations so they know about the meaning behind the sacrifices made by service members and veterans, Maywhort said.