As we get ready to celebrate Mother’s Day, there is a group of women who have been overlooked in the history of our town. While 2020 marks the 100th anniversary of the 19th Amendment to the Constitution giving women the right to vote, in 1911, California became the sixth state in the United States to grant women the right to vote.

On October 10, 1911, male voters went to the polls to vote on Proposition 4, which was an amendment to the California constitution giving women the right to vote. Women only had eight months to organize a campaign to persuade men to vote for them. Suffragists led the campaign on two fronts: Northern California and Southern California. In order to publicize their cause, suffragists created campaign buttons, pennants and posters, as well as playing cards and shopping bags. According to records, the women distributed more than three million pieces of literature and more than 90,000 votes-for-women buttons in Southern California alone. However, the women knew that they still had an uphill battle. Saloon and business interests in the cities were not receptive to this proposition, so the women devised a plan to concentrate on the rural areas. Speakers went to the farms and remote areas of the state. Women organized to convince prominent men, newspaper editors and clergymen that their cause was just. Two lines were used over and over again in every speech: “For the long work day, for the taxes we pay, for the laws we obey; we want something to say!” And at all rallies and meetings, every speaker started with the line, “I appeal to you as a mother, a grandmother, as a garment worker, a school teacher, a trained nurse . . .”

Suffragists geared themselves for the fraud that they knew would be part of the vote count. Poll watchers numbering 1,066 included both men and women, and in San Francisco, they found 3,000 fraudulent ballots.  The day after the election, newspapers declared the women’s vote dead.  The vote in San Francisco County was 35,471, no; 21,912, yes. In Alameda County, the vote was 7,818, no; 6,075, yes. It barely passed in Los Angeles County. The suffragists were very discouraged. And then a miracle happened. All of their hard work paid off. As the outlying counties began to come in slowly, the vote total changed. And in the end, the women’s right to vote passed by 3,587—an average majority of one vote in each precinct in the state! The final vote was 125,037 to 121,450. Don’t ever say your vote does not count. The irony was that San Francisco became the most populous city in the world in which women could vote.

In the election of 1912, of the 133 votes cast in San Juan Capistrano, 36 were women. It is those women who are honored today. Many of their grandchildren and great-grandchildren still live in our community.  “Take a Moment in Time” and take pride in what they accomplished.  Remember: 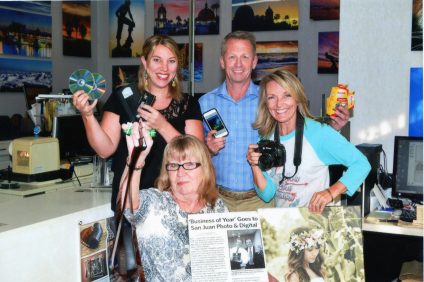