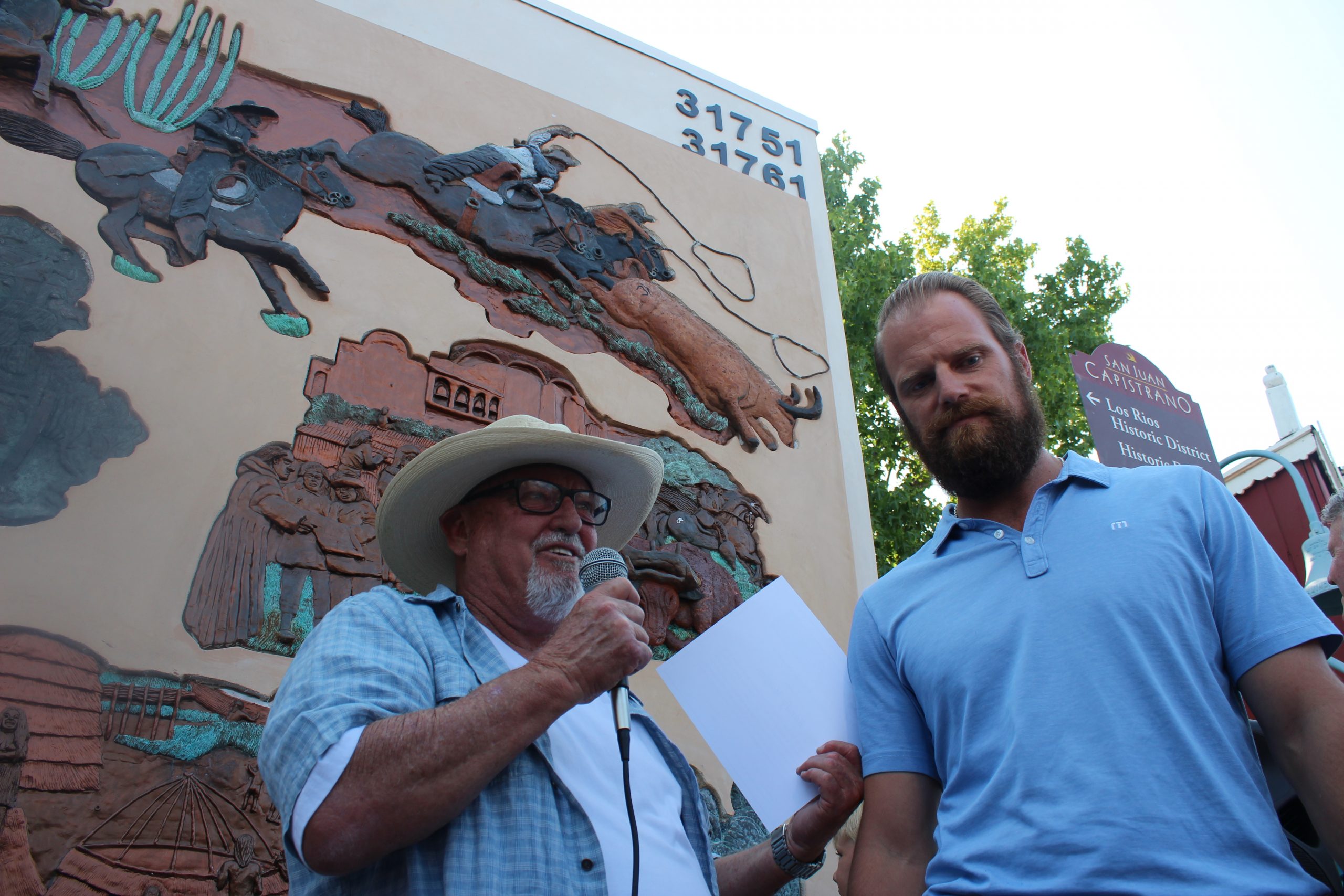 On Thursday, July 15, Almquist and Laguna Beach artist Randy Morgan unveiled a cultural sculpture of San Juan Capistrano on the wall next to Hennessey’s restaurant, as part of the Capistrano Plaza renovation project that began four years ago.

Randy Morgan has created a roadmap of art walls, which are a series of historic architectural murals. Morgan wanted to do his project in San Juan Capistrano. In 2017, he talked to then-Mayor Kerry Ferguson, who told him to contact Dan Almquist. The good news was that Almquist and Morgan formed a working relationship. Through Almquist, Morgan met Steve Rios and Matt Belardes.

Steve Rios lives in the family home on Los Rios Street, which is the oldest home in California with the same family living in it. Only Rios family members have lived in that house since 1794. Matt Belardes is the son of David Belardes, past Chief of the Juanenos, and a member of the Mission Band of Native Americans museum at the Blas Aguilar Adobe. These two longtime San Juan Capistrano residents are recognized experts on the history of San Juan Capistrano, and they made sure that Morgan’s details were accurate. Rios and Belardes were proud to be part of this project.

The project turned out to be seven bronze murals that stand 11 feet high and 17 feet long, and set within the wall of the building. The monument depicts the Portola Expedition, the Acjachemen village, the first baptisms, the Acjachemen craftsmen at the Mission, the Vaqueros of San Juan Capistrano, the taming of the bear, and the Los Rios Historic District. The entire mural is entitled “Old San Juan.”

It took almost all of the four years of the Capistrano Plaza renovation to get the history right.  Then it took more than six months to create the seven panels. Each mural weighs about 100 pounds. Eventually, there will be QR codes with each of the seven murals telling the story and suggesting people visit other parts of San Juan Capistrano.

You can spend a “Moment in Time” and visit the mural time and time again. Each time, you will see different points of interest. This mural is already part of the history of San Juan Capistrano.  For more information about Randy Morgan and his incredible art project, you can see his work on his website at randymorganart.com.