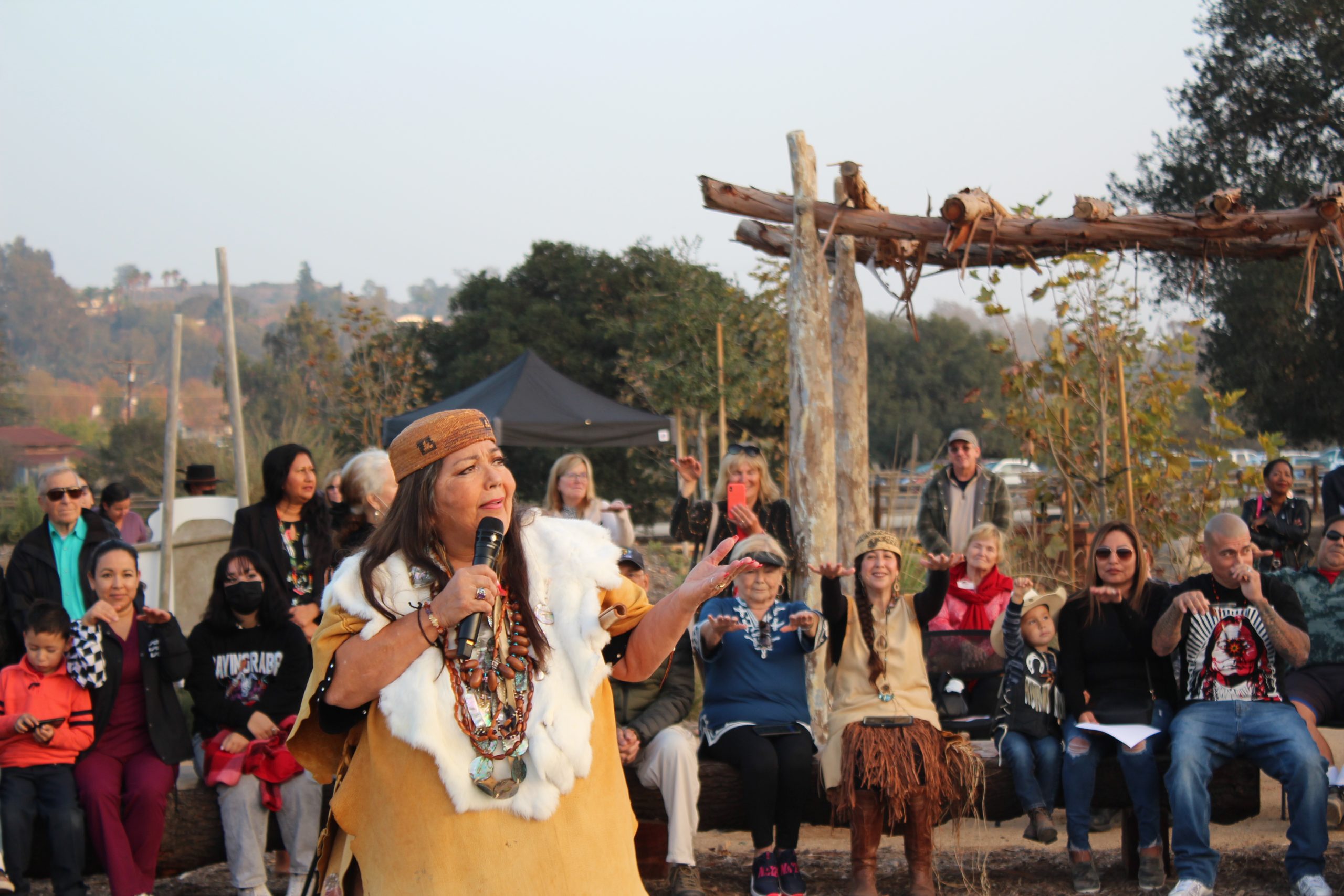 Descendants of the first people in what is now San Juan Capistrano held ceremonial rituals, smiled, and expressed elation during the long-awaited grand opening of Putuidem Village in the town’s Northwest Open Space along Camino Capistrano on Friday, Dec. 3.

The cultural area honors the region’s indigenous people through cultural markers and other amenities, and it had been in the works for years. After recent delays to the opening brought about by fiscal uncertainty during the COVID-19 pandemic, the public can now walk through the area, which is largely still open space.

“I am so thrilled to be in this circle. I’m so thrilled because never again do I have to say to the children, ‘Close your eyes and imagine there are dwellings that that look like igloos that are made with grasses.’ Never again, because when they come here, they will see it,” said Jacque Tahuka-Nunez, of the Juaneno Band of Mission Indians.

Tahuka-Nunez said the space is the same land her ancestors walked on, and was founded by a woman warrior chief. Tahuka-Nunez told other historical stories about the original inhabitants of the area and invited children in the audience to come up for a celebratory dance.

Los Rios Historic District resident Jerry Nieblas, whose grandparents and other ancestors are buried at the Old Mission Historic Cemetery along Ortega Highway, said it was an honor to stand at Putuidem Village—an occasion that left him emotional.

“This is my mother village—myself, my cousin, the Rios. This is our mother village,” Nieblas said. “This is the village of our ancestors. I feel their presence so deeply here today.”

Nieblas said they are now free to share the stories and experiences of their people, good and bad, without anyone looking over their shoulders anymore.

Jerry Nieblas’ cousin, Gigi Nieblas, was similarly pleased when attending the grand opening. She walked through the various parts of the village, as well as past a historic oak tree that represents their people and has survived through the ages while other surrounding parts of the environment have collapsed.

“It’s more beautiful than I even thought. It’s just so cool,” said Gigi Nieblas. “Everything’s fabulous. The rocks with all the writing and directions, they came out fabulous.”

City residents and officials also were at the ceremony, including City Councilmembers.

“Isn’t this a spectacular park? It is fantastic,” then-Mayor John Taylor said. “Thank you all for being here today. I want to acknowledge my colleagues on the City Council, Councilmember Sergio Farias and Councilmember Howard Hart. Sergio has been with this project a lot longer than I have. It’s so great to be here and see all the old families here, all the people we’ve seen and known for many, many years around town.”