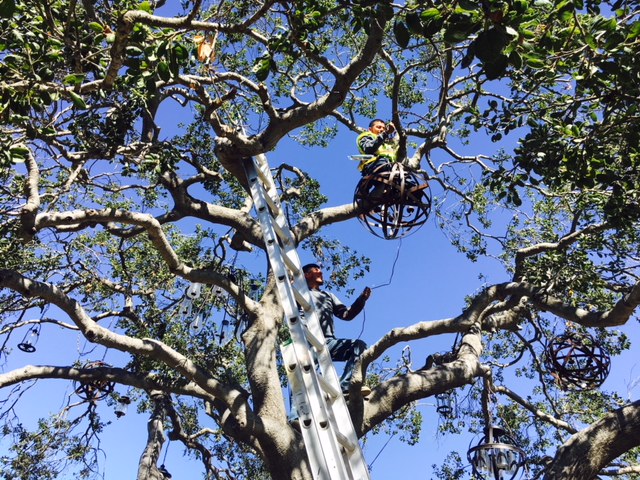 The Rancho Mission Viejo community has been given some sparkle in one of its neighborhoods, as three of its trees are now adorned with 56 lanterns throughout its branches.

The purpose of the Chandelier Trees piece in the NorthWalk neighborhood is to create a social gathering place, and although Tenenbaum did do a similar project in Silverlake, this project in Esencia was the first large-scale public installation. Tenenbaum was a part of the process from start to finish, picking out which trees to plant and then was sort of a conductor of where to place the chandeliers.

“For me it’s awe, a sense of magic and possibility,” Tenenbaum said on the feelings he gets looking at the illuminated trees.

In his Silverlake project, Tenenbaum picked an 80-year-old or so tree that he climbed up and put the chandeliers on. Tenenbaum said he took inspiration from the Silverlake project for the NorthWalk project, but that he allowed it to become something that compliments that neighborhood entirely.

“It’s definitely more tailored and specific,” he said. “This is the beginning of life for these trees.”

Tenenbaum said his hope is that people will come to gather in the area, which also features a sitting area.

“These will be things for young families to create memories,” Tenenbaum said. “You don’t see personal installations like this often.”