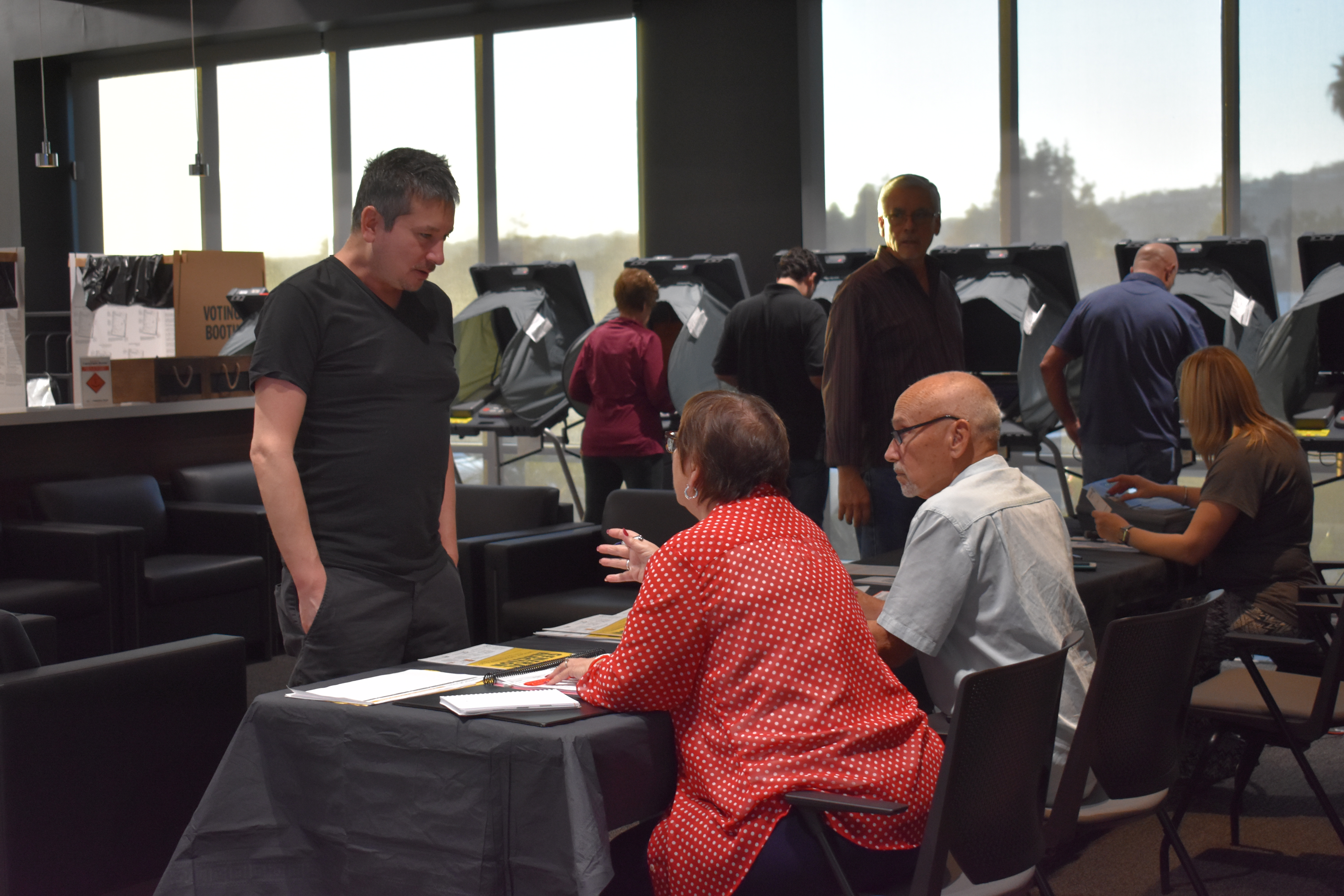 San Juan Capistrano’s City Council will likely look a little different, with two incumbent city councilmembers slated to give up their seats to a former mayor and a political newcomer.

Incumbent Councilmember Derek Reeve was poised for reelection in District 3 while businessman Troy Bourne and former Mayor John Taylor were the apparent winners in Districts 2 and 4, respectively. It appears incumbent City Councilmembers Pam Patterson and Kerry Ferguson will not be returning to the council.

Because of the creation of districts, Ferguson and Patterson ran against Reeve in a crowded field that also included college student Cody Martin, businesswoman Joyce Anderson and write-in candidate and U.S. Air Force Veteran Robert Hagstrom.

Reeve, who during his campaign championed fiscal responsibility and an end to lawsuits against the city among his top priorities, came out the clear favorite, carrying 39 percent of votes.

Ferguson and Patterson came in behind Reeve with nearly 20 percent of votes each; Martin received 11 percent and Anderson 10 percent.

The race between Taylor and Vasquez was one of the most competitive, with Vasquez taking a strong anti-development stance and painting Taylor as a pro-development candidate who would do little to stem the tide of growth and increasing traffic.

During Taylor’s campaign, he frequently called himself a “neighbor and a leader,” and not a politician. He hit hard on Vasquez’s frequent absences from community debates and forums, and Vasquez’s lack of community engagement.

Tuesday night was a significant victory for House Democrats across the nation and California, but one of the large milestones in this state that was secured for the “blue wave” in the state’s 49th district.

Democratic candidate Mike Levin of San Juan Capistrano appears to be the victor after the final results from San Diego County were tallied late Wednesday morning.

Heading into the wee hours of Election Night on Tuesday, Nov. 6, with a lead of about 5 percent and a number of precincts reported, Levin celebrated a little early. But the final numbers to come in were from San Diego Couty, which voted for the Democratic candidate of the 49th district heavily in the 2016 election.

Levin braced his campaign on the back of his environmental lobbying and legal experience in the field. He has vowed to stop President Donald Trump’s administration from executing its offshore oil drilling proposals and favored an affordable health care system.

Republican Diane Harkey of Dana Point had hoped to keep the district in her party’s control, as the predecessor of the district seat was held by Republican Rep. Darrell Issa for nearly 20 years. Harkey used her experience as a “tax-fighter” to drum up support and stood behind the “Yes on Prop 6” campaign to repeal Gov. Jerry Brown’s gas tax.

“I feel great, and it’s a victory for all of those who have worked so hard for a long time to finally flip this district, and I’m very grateful,” Levin said in a phone interview with The Capistrano Dispatch on Wednesday.

Trump wasted no time in venting his frustration about the Republican House losses from Tuesday, blaming outgoing Speaker of the House Paul Ryan and then later declaring the evening a success based on its four Senate seat gains. When asked what kind of political atmosphere he expects to inherit, Levin said he’s optimistic.

“I think it’s going to be positive and I base that on a conversation with Darrell Issa. Mr. Issa and I have differed on political issues. We nonetheless had a great discussion, and he offered his help in the transition,” Levin said. “I believe in the institution of the House of Representatives, and it is very important that all members treat each other with respect, and hopefully in a short time, we can get beyond the toxic rhetoric.”

If the numbers hold true following canvassing of the ballots, that would mean turnout for this particular election garnered just half of the 310,000 votes that were cast in the 2016 election.

On Twitter, Levin thanked many supporters and retweeted a few supporters declaring victory for him. He said he’s to report to Washington, D.C. by Monday for orientation.

It wasn’t the snoozer, inevitable outcome for Assemblymember Bill Brough, R-73, or for State Sen. Patricia Bates, R-36, this time around, but both representatives won their elections by or near double-digit percentage margins.

Marggie Castellano, who was behind about the same margin in the primary election in June, was still a candidate with whom Bates had to contend.

Brough faced a challenger in 2016 who stopped campaigning midway through, enabling Brough to win by more than 90 percent of the vote. This year, he faced a stronger opponent in Scott Rhinehart, but Brough still held on for a decisive victory Tuesday night.

Results provided were gathered from the Orange County Registrar of Voters and California Secretary of State’s Office as of 9 a.m. on Wednesday, Nov. 7. Results could change between now and Dec. 7.