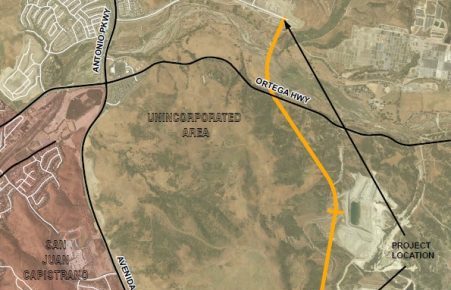 As the Transportation Corridor Agencies (TCA) continues its study of eight different ideas for traffic alleviation in South County, the Orange County Board of Supervisors is poised to consider a new road alignment.

Supervisor Lisa Bartlett, who is the sponsor of the decision, has put together an alignment that would not require the taking of private property by the government and is mapped to run along the east side of the Prima Deshecha Landfill. It would start at Cow Camp Road and finish at Avenida La Pata on the San Clemente side of the road.

The new road is being billed as the Los Patrones Parkway Extension (LPPE), which would be a northern and southern road with two lanes in each direction.

Bartlett’s office has estimated the new road would cost about $130 million, but there are some contingencies.

“This can change with scope (interchanges vs. intersections). Until a project is further studied, we won’t have a better (engineer’s) estimate,” Bartlett stated in an email. “There are a few projects we can compare LPPE to: Avenida La Pata was originally estimated at $72 million. Final cost was $129 million. It had significant funding challenges along the way. Los Patrones Pkwy was estimated at $103 million. Final cost is projected at $95 million. Los Patrones was privately led.”

“We won’t get a better estimate until we keep moving forward,” Bartlett said. “To be conservative, we anticipate additional costs. A multi-agency effort would bring more resources to the table, avoid bond financing, and drive us towards a consensus-based regional capital program.”

The alignment is expected to be on the Dec. 4 Orange County Board of Supervisors agenda. The decision will be whether to suggest the alignment to the TCA.

A Nov. 7 letter from Darrell E. Johnson, the CEO of Orange County Transportation Authority (OCTA), said he had concerns about some of the proposals from TCA, as some of the projects are in conflict with the county’s long-term Measure M2 plans, which include extending the HOV lane from San Clemente to San Diego County. TCA’s Idea 21 proposes expanding those lanes even further, something that’s also not popular with San Clemente residents.

“We have completed the first step in the development process and submitted a project study report to Caltrans,” Zlotnik said. “We are waiting for Caltrans to approve that report, and then we can move into the environmental phase, which we expect to take approximately three years.”

A few other projects north of San Clemente could also be affected if some of the ideas come to fruition, Zlotnik said.

The Board of Supervisors plans to discuss the item at its Jan. 29 meeting.

This article was published in the Nov. 29-Dec. 5 edition of the San Clemente Times.