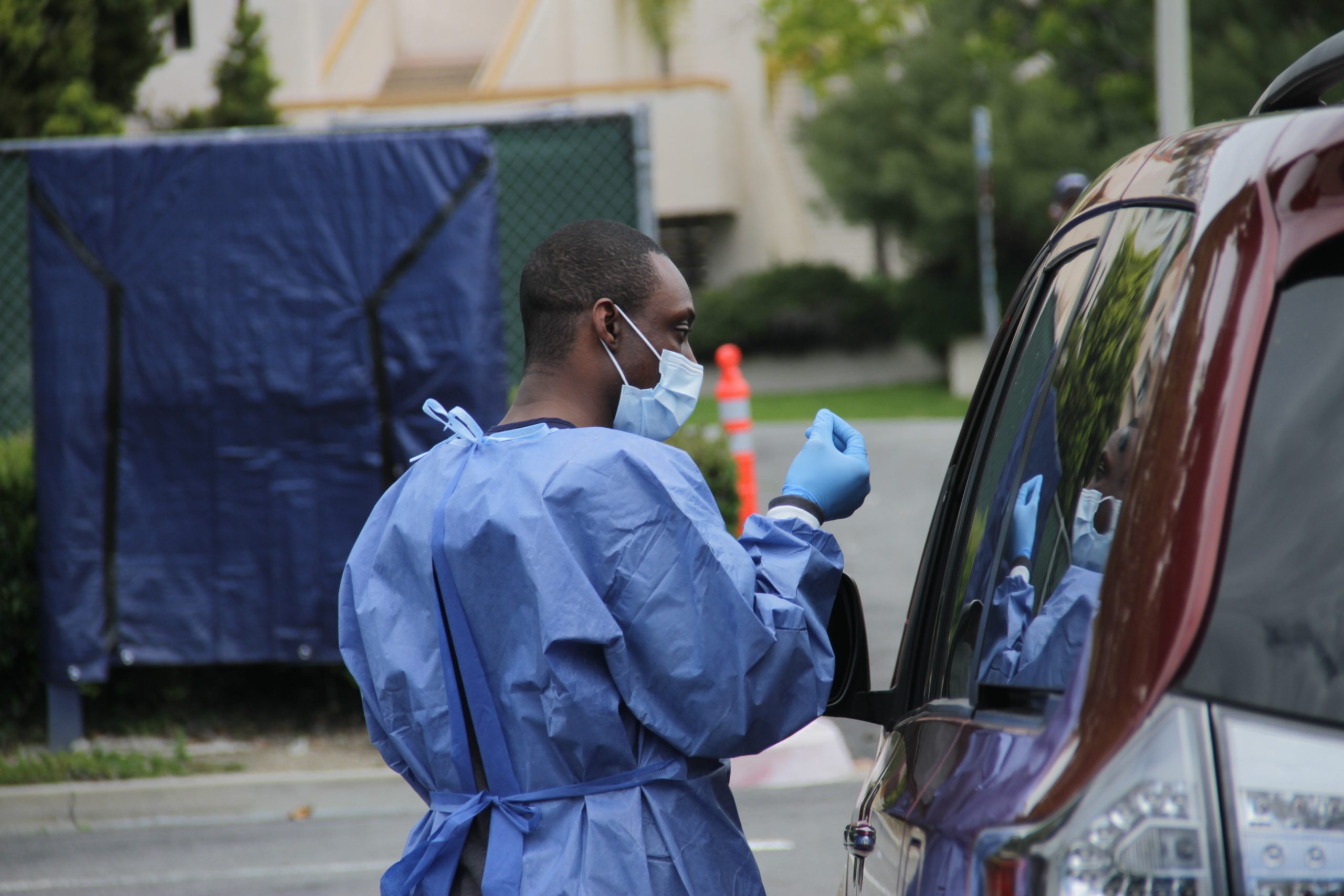 Featured Image: Michael Yeboah, a nursing supervisor for MemorialCare, consults with a prospective patient who’s hoping to get tested for coronavirus on April 13, 2020. New state laws impacting health care, voting, affordable housing, climate change and education were among the 770 new state laws to take effect in the new year. One such law insurance providers from placing the cost of COVID-19 testing and immunizations on its members. Photo: Shawn Raymundo

With the pandemic remaining an ongoing issue, the California State Legislature focused on measures to address COVID-19 and health care issues. Housing affordability, another ongoing issue, was at the forefront of the bills that lawmakers passed and subsequently enacted by Gov. Gavin Newsom.

In a late December press release, Newsom highlighted some of the new laws taking effect this year that he said “make meaningful progress on an array of issues that matter deeply to Californians across the state.” He also thanked the state senators and assemblymembers for their work in the 2021 legislative session.

“I thank Pro Tem (Toni) Atkins and Speaker (Anthony) Rendon for their leadership in advancing historic measures to improve the lives of Californians, including new tools to boost our housing supply, improve workplace conditions and build a stronger state,” Newsom said in a press release.

In response to the pandemic, Newsom signed a bill that would require insurance companies to cover the cost of COVID-19 testing and vaccines. This bill would also apply to future diseases that prompt a declaration of a public health emergency by the governor of California.

Furthermore, the bill prohibits insurance providers from placing the cost of testing and immunizations on its members. The bill would apply retroactively, beginning March 4, 2020, when Newsom declared a state of emergency.

“I am signing Senate Bill 510 to ensure Californians have timely and equitable access to COVID-19 testing and vaccinations,” Newsom stated in an October press release when signing the bill. “This bill will ensure uniformity in testing payment and access rules throughout the state.”

Another pandemic-related measure will ensure that Californians can continue to cast their vote by mail—a method deployed statewide following a May 2020 executive order, which required election officials to send vote-by-mail ballots to all registered California voters for the General Election.

With Assembly Bill 37, vote-by-mail is here to stay in California. The bill calls for all active, registered voters to receive a vote-by-mail ballot ahead of elections.

The incremental increase in California’s minimum wage comes as a result of Senate Bill 3, passed in 2016, which committed to raising the state’s minimum wage to $15 per hour by 2022 for large businesses and 2023 for small businesses.

AB 286 also requires food delivery services to disclose a cost breakdown of each transaction, and makes it unlawful for the service to charge a customer any price that is higher than the price posted by the restaurant or food facility.

The California Legislature also passed several bills to address housing affordability in the state. Senate Bill 8 extends the provisions of the 2019 Housing Crisis Act, many of which were set to expire in 2025, through 2030.

According to a press release from the office of the governor, the bill aims “to accelerate the approval process for housing projects and curtail local governments’ ability to downzone, among other provisions.”

Two other housing-related measures that Newsom signed include Senate Bill 9 and Senate Bill 10. SB 9 creates a process to allow homeowners to build a duplex or split their lot in a residentially zoned area. Under SB 10, city or county governments could adopt an ordinance before Jan. 1, 2029 to zone any parcel for up to 10 residential units near transit-reach areas or urban infill sites.

Senate Bill 552 will require that water suppliers develop and maintain a Water Shortage Contingency Plan that would include plans in the case of a drought by no later than July 1, 2023.

Senate Bill 343 will set new advertising requirements regarding the recyclability of products and packaging by prohibiting misleading recycling labels and signs on items that are unrecyclable.

By 2024, the Department of Resources Recycling and Recovery is also required to produce a new report to the public, evaluating whether certain products and packaging are recyclable in the state.

Also addressing waste disposal, Senate Bill 1383, which was passed in 2016, required cities to adopt an ordinance by 2022, ensuring compliance with the state’s new organic and food waste disposal program.

Similar to a previous law passed in 2018 that restricted restaurants from providing single-use plastic straws unless requested by the customer, Assembly Bill 1276 will extend the restriction to “single-use foodware accessory or standard condiment” such as utensils, napkins and condiments.

In regard to education, one Senate measure aims to address the mental health concerns that cropped up while schools went virtual. Senate Bill 224 will require schools that offer one or more health education courses in middle or high school to include mental health instruction in their health courses.

The State Department of Education is tasked with developing a plan “to expand mental health instruction in California public schools” by 2024.

The Menstrual Equity for All Act of 2021 will require that public schools with students from sixth to 12th grade stock school restrooms with menstrual products, free of cost, in all girls’ and all-gender restrooms before the start of the 2022-23 school year.

Senate Bill 16 changes the confidential status of police personnel files and requires that records subject to disclosure be released no later than 45 days from the date of a request for disclosure. The bill would require that records be released in the case that a finding was made relating to unlawful arrests, unlawful searches and discriminatory or prejudiced conduct.

This bill requires that officers who witness an act of force intervene and report the incident. The bill will also delete a provision in the existing law that’s required a court to exclude complaints concerning officer conduct made more than five years prior to any litigation.

Under Assembly Bill 600, the existing definition of “nationality” will be expanded to include immigration status.

Plans for the monument will need to be submitted for review and approval by the Joint Rules Committee.