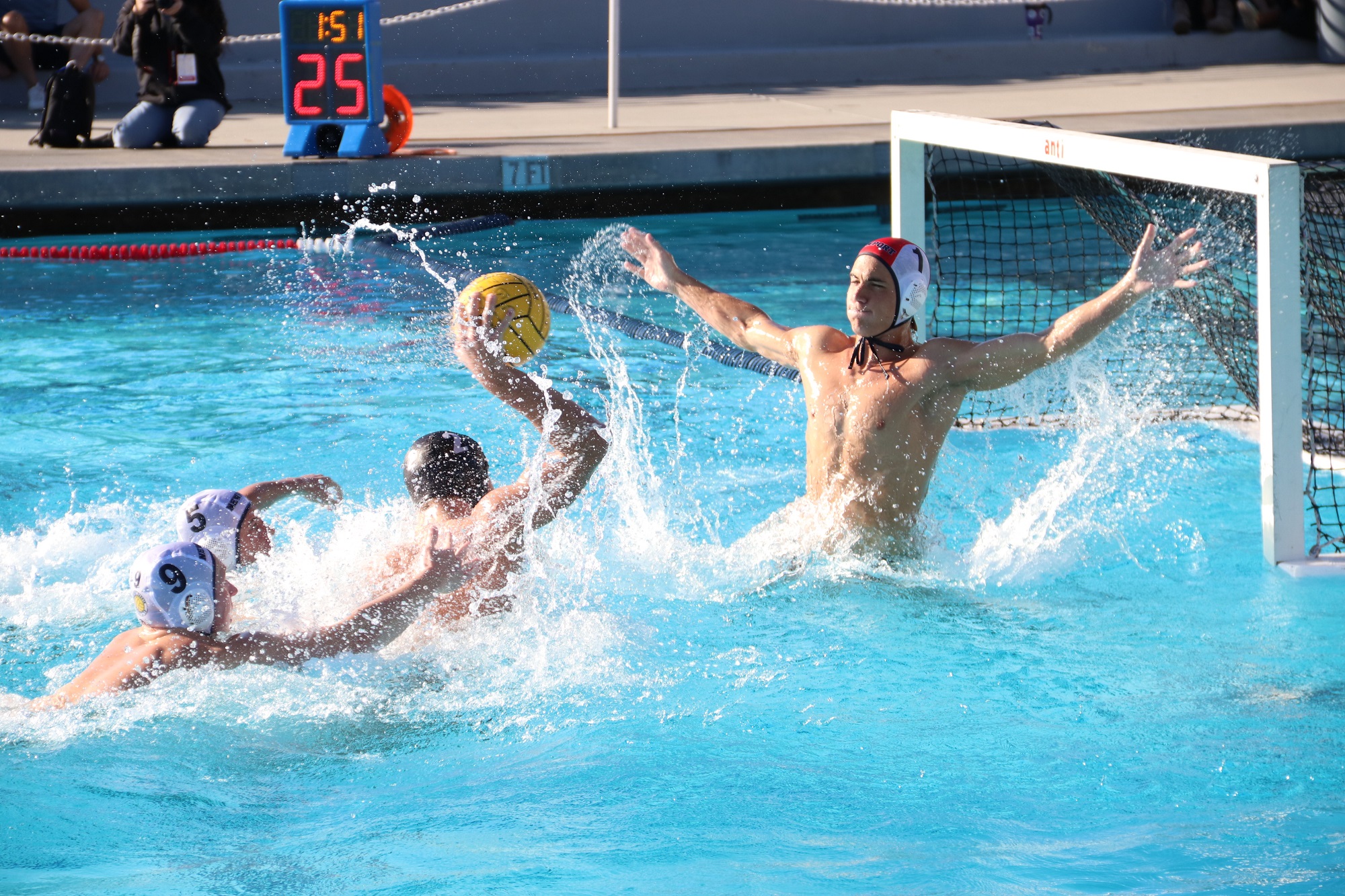 IRVINE – It was a match fit for the stage and the atmosphere surrounding it, but even with a fight to the bitter end, the JSerra boys water polo team found itself on the wrong side of the razor’s edge.

Newport Harbor swung ahead by three goals midway through the fourth quarter, but JSerra had a prime opportunity to tie in in the game’s 45 seconds. The Sailors stood tall with a field block and ran out the final seconds to sink the Lions, 10-9, and capture back-to-back CIF-SS Open Division championships in front of a raucous, standing-room-only crowd at the Woollett Aquatics Center in Irvine on Saturday, Nov. 12.

“This team (Newport Harbor) are champions,” JSerra coach Brett Ormsby said. “They were champions before this game. That’s the reality. They had won it before this year, and I thought that there was a determination, physically, they were more aggressive than us in key moments.”

During its playoff run, it was JSerra (27-3) that had employed a press defense to much success, but the Lions sank back on defense, while Newport Harbor (29-2) pressed the issue in the third quarter to grab a lead it wouldn’t relinquish.

“I thought we spent a little too much time backing off into zones,” Ormsby said. “We felt like there were some shooters we could take advantage of, but I think the last two minutes really showed that when we extended out and pressed and were aggressive, that was probably better for us.”

Newport Harbor had landed what looked like the finishing blow with just over three minutes remaining. The Sailors seized a huge swing of momentum with a save on a five-meter penalty shot by JSerra, and immediately coming down the pool to score and go up by three, 10-7, seconds later.

With two minutes remaining, JSerra pushed back against the tide with two goals off the rush 10 seconds apart from Will Schneider and off a Newport offensive foul from Bode Brinkema.

JSerra got the ball back with 45 seconds left and trailing by one. The Lions brought up their goalie into the attack pressing for the tying marker, but a strong shot hit the outstretched arm of Newport Harbor defender to deny the chance.

After a Newport Harbor timeout, the Sailors ran out the clock to capture the program’s 14th CIF-SS title. JSerra earned its second runner-up plaque in three championship appearances, with a Division 4 title in 2019. It was Newport Harbor’s second win in three games this season against JSerra.

“They believed until the very end,” Ormsby said. “Even with 20 seconds left when Newport called their timeout, we know all they have to do is run out the shot clock. It’s really hard in that situation to get a steal, but I told them what we were going to try to do, and they went and tried to do it. I think until they end they believed, and that’s great.”

JSerra and Newport Harbor traded goals in the first half. Schneider scored the game’s opening goal in the first quarter, and Ryder Dodd scored twice along with a Drew Vangrin goal for the Lions in the second quarter. The game sat a 4-4 tie at halftime.

One of Dodd’s two goals came on a six-on-five opportunity. It was JSerra’s only goal with the extra man on seven opportunities in the game. Newport Harbor scored on two of its three six-on-five chances.

“Some missed opportunities offensively for us,” Ormsby said. “Too many offensive fouls. I don’t know our six-on-five ratio right now, but it wasn’t good. That was basically it.”

Newport Harbor scored two goals 45 seconds apart early in the third quarter to grab the lead for good. The quick scores plus the Sailors’ press defense kept the Lions at bay.

The Lions have seven seniors on this roster of 21, and while there are impact members of that class, including Helfer in cage and Vangrin in the field, JSerra has an incredibly talented junior core that can take the feelings from Saturday into next season.

“That was part of my message to the boys,” Ormsby said. “One, this is one of the worst feelings in sports, but it’s not the worst feeling in life. They’re great kids, and they’ve got a lot of great things going for them, so it kind of refocused and reframed on that.”

“But the truth of the matter is, in sports, you hope you can skip a step. You hope you can arrive a year early. Most often, you have to go through this and feel this feeling. Newport is a good example. They lost two finals before they won a final. This is all part of the process unfortunately.”

This isn’t the end for the Lions’ senior class either, as they’ve still qualified for the CIF State Regional playoffs. The regional brackets will be released on Sunday, Nov. 13, with the first round at home sites on Tuesday, Nov. 15.