Bill was born to William Douglas Daniel Hammond and Leonor Elisa Paez-Urquidi Hammond in Los Angeles, California, on Dec. 31, 1939. The family lived in Connecticut during WWII while his father worked as an engineer for Auto Ordinance Corporation, then settled in San Juan Capistrano in 1946, where his father built two homes, taught high school, and worked as a design consultant for the Marksman Corporation of Los Angeles. His mother, after completing her education, taught Spanish in various Orange County high schools and colleges.

The eldest of three brothers, Bill led his siblings through Capistrano elementary schools and graduated from Capistrano Union High School in 1958. With his remarkable athletic skills, Bill competed there in multiple varsity sports and led its tennis and golf teams to regional championships in his senior year. He subsequently played on golf scholarships for the college teams of Santa Ana Community College and the University of Hawaii, from which he graduated in 1963. His love of golf would continue throughout his life, both in competing in high-level amateur and corporate competitions throughout Southern California and in teaching the game to aspiring competitors, friends, and always less-talented family.

In 1963, William married Lynda Pearson of Mission Viejo, California. Their son, William Wade Hammond, was born in 1970. While the marriage ended in divorce, the parents never wavered in their support for Wade, who would become a successful artist, photographer, bar manager and booking agent in Long Beach, California.

Bill began his work as a research and design engineer with Babcock Electronics Corporation in 1963, where he honed the skills in assembly-line, mold-making, control, and fixture design that he would use throughout his career in manufacturing and aerospace systems. His own company, Spectrum Engineering Design, was established to develop patented test fixtures and equipment for electronic-component testing. After Spectrum, Bill continued to work as a designer and engineer in Southern California for such corporations as Northrup Aviation, Hughes Microelectronics Systems, and M K Engineering until illness restricted him to consulting work in the 1990s.

To the deep gratitude of his family, Bill was able to help his parents live out their lives in the family home in San Juan Capistrano, a house his father had designed and built in 1950. Bill is survived in his immediate family by his son Wade and his daughter-in-law Brittany Hammond of Long Beach; his brother Geoffrey Hammond and his wife Pam of Carlsbad; his brother Alexander Hammond and his wife Barbara of Pullman, WA; and five nieces and nephews and their seven children. The family wishes to thank the staff at Anaheim Crown Plaza for their kind care and Bill’s long-time friend Edna Dolores Craig for her years of warm support. 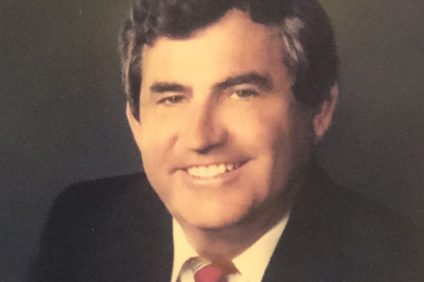