On June 12, the Orange County Sheriff’s Department officially stopped including detailed summaries for each of its sheriff’s blotter entries, a move that will change the way residents and reporters gather information about recent crimes or calls for service in their communities.

Residents can still access the sheriff’s blotter at OCSD’s website and view the type of calls the department is responding to, as well as the date, time and location of each call. The only change is that viewers are no longer able to click “read” on the far right column and access detailed information about each call.

In lieu of the detailed blotter entries, OCSD officials have announced that a transition to an interactive crime map is in the works. The new software, called Crime Mapping, will provide residents with the same information the current blotter does—type of call date, time and approximate location.

In an email from OCSD Capt. Andy Ferguson to department personnel, various reasons were listed for the switch from blotter summaries to the interactive crime map. Ferguson wrote that the department has “received complaints that too much information has been provided in the past,” and that OCSD wants to be transparent in the types of calls they respond to, while also balancing that transparency with victims’ and witnesses’ confidentiality. He said the aim is to achieve consistency across OCSD’s cities and departments in the type and amount of information that is released.

OCSD Public Affairs Manager Jaimee Blashaw said the department does not keep a log of the number of complaints they’ve received about the blotter. However, she said that, anecdotally, the department has had residents contact them regarding privacy concerns.

“In weighing the importance of being transparent with the public and protecting the privacy of the residents we serve, the department opted for this new format, which better reflects our commitment to both ideals,” Blashaw said.

Ferguson also wrote that working on the blotter is labor-intensive for officers, and OCSD’s “limited resources can be used elsewhere for increased public safety.” He added that not providing blotter details and summaries is the industry standard.

Lt. Scott Spalding, chief of police for San Juan Capistrano, said that in San Juan, the blotter could take anywhere from 45 minutes to an hour and a half per day for a deputy to work on, which is time spent in an office instead of increasing public safety in town. That adds up, Spalding said, when you consider the 13 cities that make up OCSD.

Blashaw said that removing the additional blotter descriptions will not limit the public’s knowledge of what type of crime is going on in the city.

“Residents will still have access to the type of call, block number, case number and time of day,” she said. “In addition, our new software will map the location of the calls so residents can more easily see where in the city crime is occurring.”

Lt. Spalding said he anticipates that OCSD’s crime mapping software will roll out within the next few months.

To view an example of the crime mapping system OCSD is switching to, check out the Anaheim Police Department’s crime map at www.crimemapping.com/map/ca/anaheim.

Any inquiries from the public on specific blotter entries can be directed to OCSD’s records department by emailing requests to prarequests@ocsd.org.

Editor’s Note: During this shift in the format of the blotter, The Capistrano Dispatch will remain dedicated to reporting breaking news and crime news in our community in print and online. In addition, we’ll keep readers posted on future blotter developments, including the launch of OCSD’s crime map. 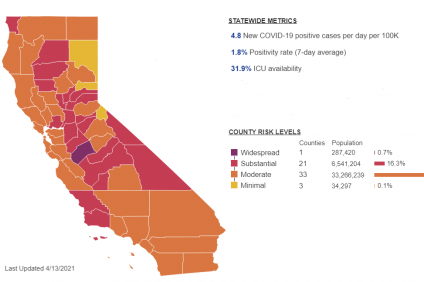 Yellow Tier Next for Orange County