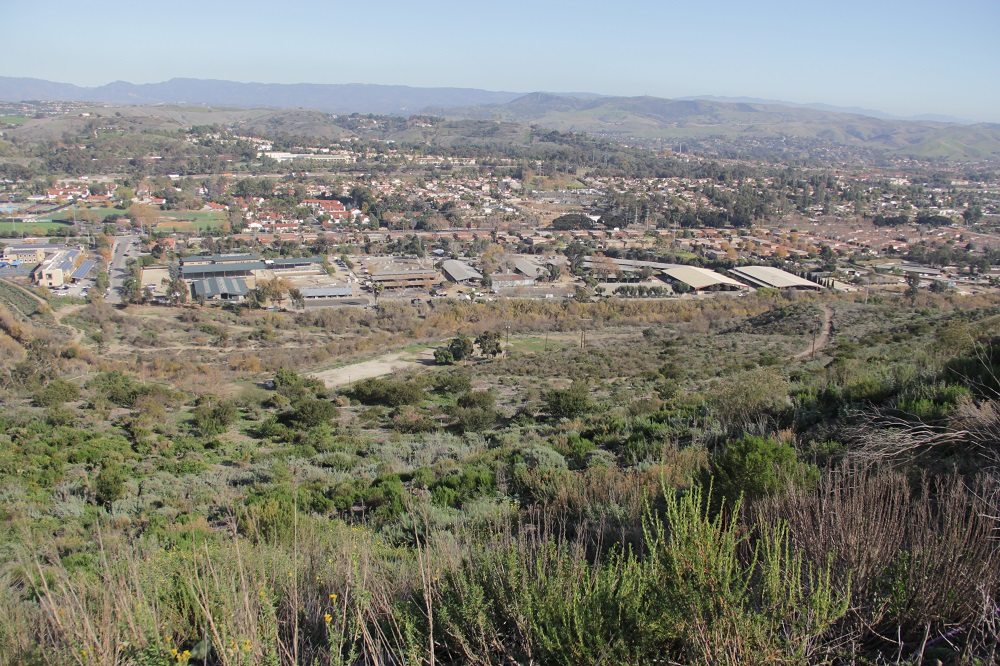 For decades, the 53-acre wilderness parcel, just west of Saddleback Valley Christian School, was covered with weeds, trash from illegal dumping, and was used for several illicit activities including gang related graffiti.

“When we started it was a total mess of an area,” said Derek Ostensen, the city’s habitat restoration project manager who oversaw the plan through to fruition.

“There was an enormous amount of dumping … tons of graffiti and vandalism, some homeless people were living in (trailers) and throughout the site,” he added. “Old buildings were being used by the youth to tag and to have late night parties and all other criminal elements.”

With the help of several local contractors, nurseries and the underprivileged community, Ostensen was able to officially complete the OCTA-funded project last July, creating an open space landscape that’s now home to several native plants and wildlife for the public to enjoy.

“It’s very much a moon scape when you start. There’s not very many birds … barely any wildlife, it’s almost silent out there,” he said. “And then as it comes to life, you start to have this amazing range of species that creates a home in that habitat, so you have tremendous diversity.”

The $1.5 million project to clean up San Juan Capistrano’s 53-acre wilderness parcel, is one of a dozen OCTA-funded restoration projects through the OC Go – or Measure M – Freeway Environmental Mitigation Program.

The program was established to restore open space lands in Orange County to their native habitats in exchange for the approval of the 13 OC Go freeway improvement projects. Orange County voters in 1990 approved the Measure M sales tax to improve the county’s roads and freeways. In 2006 voters renewed the tax for another 30 years.

According to Lesley Hill, project manager for the Environmental Mitigation Program, the OCTA selected the northwest parcel, adjacent to the open space along Oso Creek and Trabuco Creek, because of the potential impact its habitat would incur from the county’s freeway projects.

Because the project included restoring the space around the creeks, it created a corridor to connect other open space areas for species like the gnatcatcher to get through.

“Having that creek is kind of a corridor for not only birds but also some of the smaller animals and other animal species to kind of get through and to continue on to other areas to keep that genetic movement,” Hill said. “That’s really important.”

A project of this size, Ostensen noted, required several years of work. So, he enlisted the assistance of the Orange County Conservation Corps, which helps at-risk young adults acquire employment training and skills.

“As we started to engage the underserved community we saw a totally different approach to this property and the wilderness then we’d seen before,” Ostensen said. “The vandalism went down precipitously. We started to see a lot more families coming out picnicking, the demographics of people enjoying the wilderness became much more diverse, which is really nice to see.”

Ostensen added that the Conservation Corps participants became emotionally invested in the property after working with crews to remove the trash and weeds and help planting plants.

According to the OCTA, more than 200,000 invasive weeds were uprooted and replaced with roughly 60,000 native plants and trees including coastal sage scrub and oak woodland.

For the first few years of the project, which began around 2010, crews conducted grow-kill cycles to eliminate the decade’s worth of weed material in the soil, Ostensen explained.

“You get rid of all that weed material then you let all the weed seeds grow up and you kill those off and you probably have to do that four, five, six times on a project that has a ton of weeds like this project,” Ostensen said. “It takes over a year, it can take one to two years and then it still doesn’t go away entirely.”

To continue the weed elimination, they began planting native plants. When enough plants began to grow, those weeds would reduce from not getting enough sunlight and water.

“The native habitat becomes the dominant habitat and it’s resilient enough that it can survive on its own going forward,” Ostensen said.

The project, Ostensen said, could have probably been done in the five years as planned, but California’s severe drought delayed the completion.

“You’re adjusting 50 different metrics when you’re in a severe drought situation,” he said. “And it results most importantly in slower overall plant growth. If the plants are growing much more slowly it’s adding time to your project.”

The team was forced to adjust their techniques, incorporating “adaptive management,” Ostensen explained.

“So, that entails careful water management, timing, when exactly you’re putting down seed and container plants to make sure that you’re not planting a ton of material that would require more water than you budgeted for and a range of other adjustments you have to make to accommodate such a significant and impactful drought,” he said.

According to Hill, the next major project that’s expected to be completed soon is the restoration of the Bee Flat Canyon.