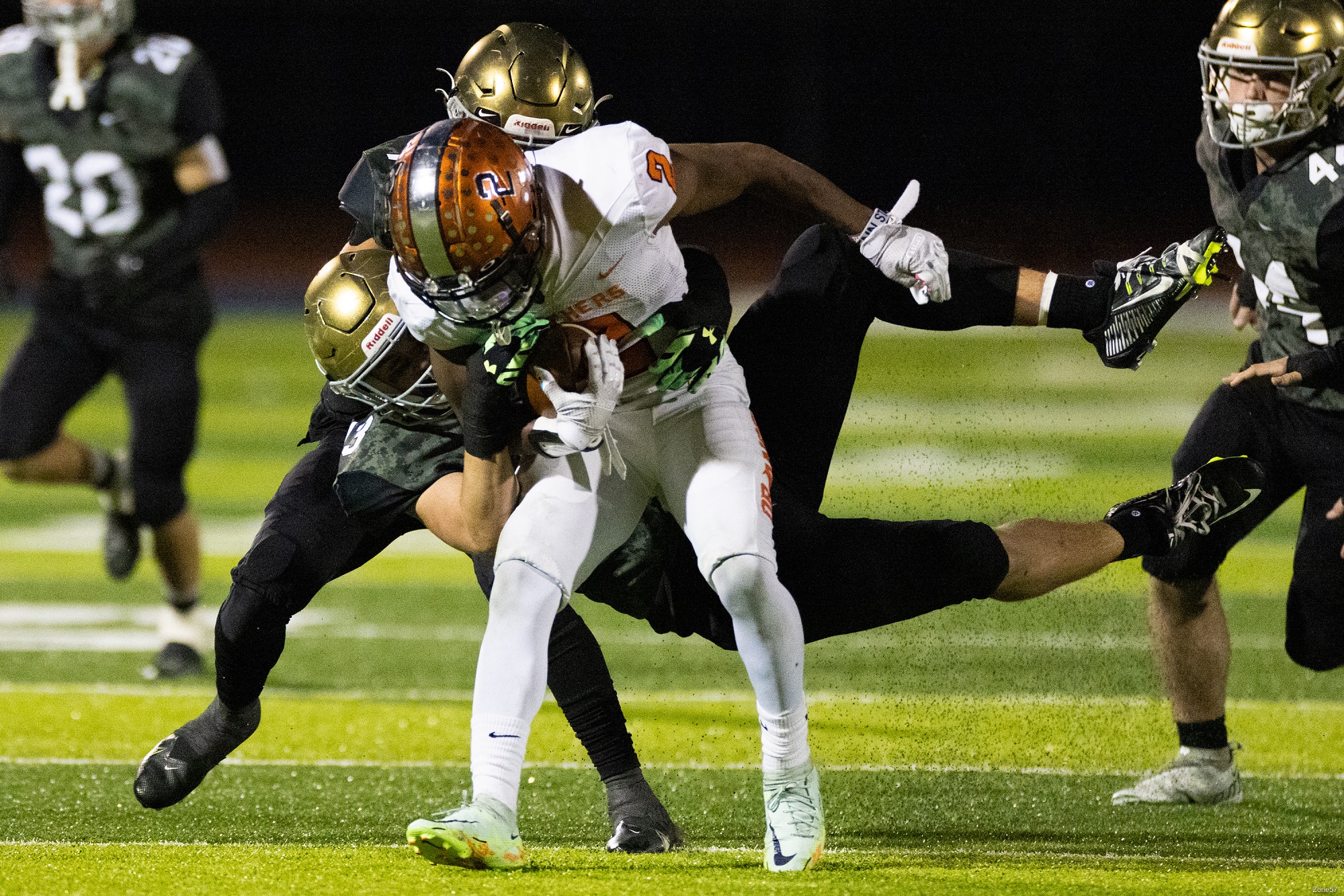 SAN JUAN CAPISTRANO – In its late season turnaround, San Juan Hills turned to its running game to surge to a Sea View League championship, the top seed in CIF-SS Division 6 and Friday’s quarterfinal.

However, when it came to the biggest downs, it was Orange’s ground attack that sank the Stallions.

Orange ran for 338 yards and four touchdowns and converted 12 of 18 third- and fourth-down attempts to stay ahead of San Juan Hills from the jump, 34-18, and advance to the semifinals 1on Friday, Nov. 11 at San Juan Hills High School.

“When they needed to make plays, they made the right plays,” San Juan Hills coach Rob Frith said. “They called the right plays, and they ran the ball very well tonight. Tough kids, for sure.”

San Juan Hills (4-8) had won four in a row after an 0-7 start, as its offensive line became healthier, Michael “Butter” Tollefson took command as a dual-threat and Sullivan Land got hot to spark the Stallions ground game.

On Friday, Orange’s defense, along with some San Juan Hills penalties, kept the running Stallions in the barn with only 93 yards rushing on 30 carries. San Juan Hills gained 14 first downs, while Orange gained 13 in the first half alone with 20 in the game.

“For us, I felt like it was really difficult for us to get things going,” Frith said. “Penalties absolutely killed us tonight. It was hard to get momentum and get going. Every time you think you have a decent play, there’s a flag on the field.”

Orange quarterback Hype Grand ran for 137 yards and three touchdowns on 11 carries. Grand’s three scores came almost completely untouched on short porches of 1, 2 and 1 yard, and he also converted a handful of third-and-longs with slippery scrambles.

“We had some missed assignments there where we didn’t have someone to account for the quarterback,” Frith said of Grand’s touchdowns. “He got loose a few times and made plays on third down as well. You get them in a third and long, and that kid makes plays.”

Despite San Juan Hills’ start-and-stops and the Panthers’ run game, the Stallions were still very much in the game until late in the fourth.

Christian Pioche got San Juan Hills on the board in the first quarter with a 35-yard interception return touchdown, and a 5-yard reverse run by Colton Chase with a helpful push from Brayden Bockler in the second quarter. Both scores kept the Stallions within five points.

San Juan Hills got the ball to open the second half, and despite getting set back to a first-and-20, the Stallions converted and worked their way to the Orange five-yard line. However, the Panthers stood up to the test and held San Juan Hills to a field goal.

San Juan Hills had pulled within two points midway though the third quarter, but those were the last points the Stallions could muster.

Orange finally broke back through in the fourth quarter with a 12-play drive on which the Panthers did not throw the ball once. Grand ran in his third score for a nine-point lead, 27-18.

There was still time for San Juan Hills, but a false start beset their next drive for a three-and-out. Then Orange broke the Stallions’ back on the next possession.

San Juan Hills’ defense looked like it had once again done its job, as it had for the majority of the second half to force fourth-and-1 at the Orange 27-yard line with just over four minutes remaining. With the Panthers holding a two-score lead, Orange decided against the safe punt and instead kept the game in its own hands.

Orange’s risk paid off, as the Panthers busted through the San Juan Hills line and Ardwon Morris sprinted away on a 73-yard touchdown that sealed the victory. Morris ran for 144 yards on 13 carries.

“I thought we were going to get the stop,” Frith said. “That’s pretty risky going for it there, but they’d done that a couple times in the game. When they needed to make plays, they made plays. We sell out to stop the run, they create a crease and the kid is hitting his head on the goal post.”

San Juan Hills got the ball back and drove deep into Orange territory with a hurry-up offense, but the Stallions couldn’t connect on fourth-and-goal from the 10-yard line. Orange kneeled out the game to move on to the semifinals.

San Juan Hills isn’t a senior-heavy roster, but the Stallions will certainly miss the contributions of Ryan MacDougall and Enzo Benzan on the offensive line, receiver Briggs Marquis and tight end Brayden Bockler in the passing game or Dylan Wersching and Pioche in the secondary.

It’s a class that saw the varsity win a CIF-SS title in 2019, dealt with the impacts of COVID-19 as sophomores and battled through one of the toughest schedules in Orange County as juniors and seniors.

“I love this group, I love our senior class,” Frith said. “I never ever questioned them, their desire or anything like that. They came every single day to work. They stayed resilient and always came out to grind.”