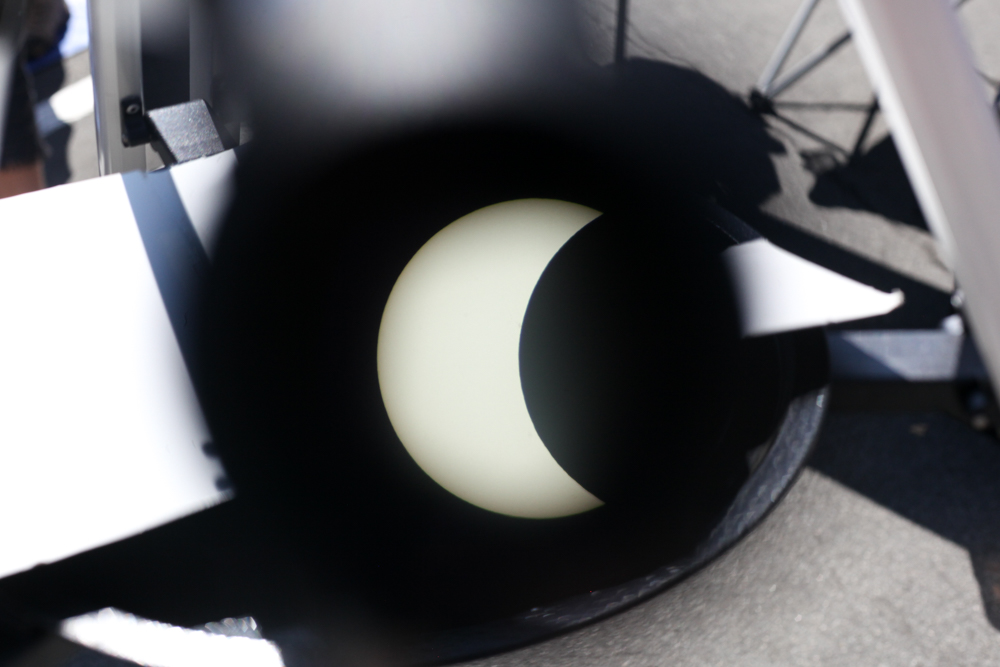 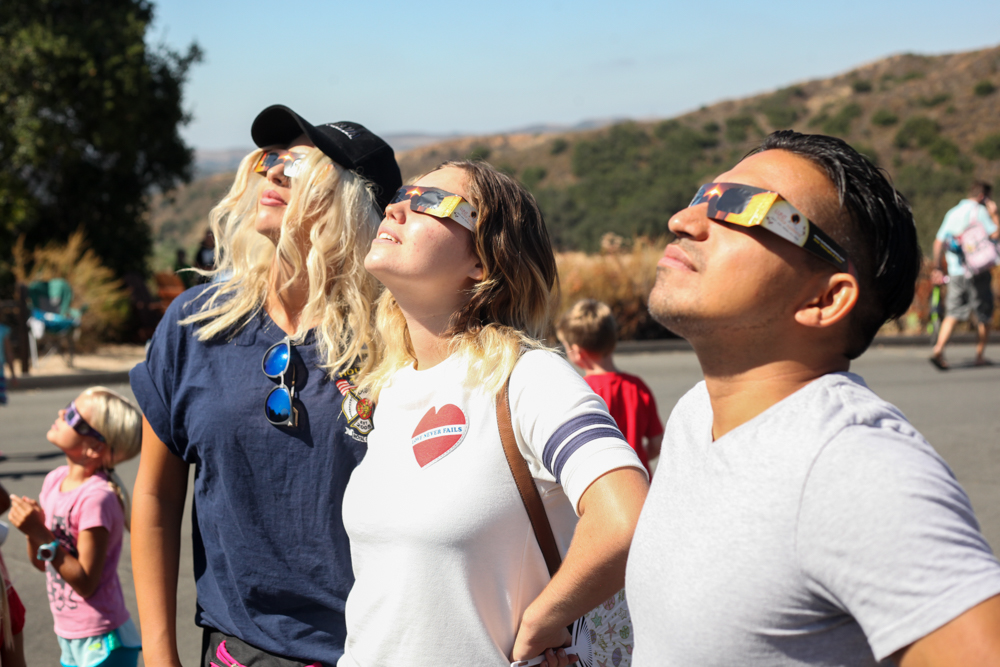 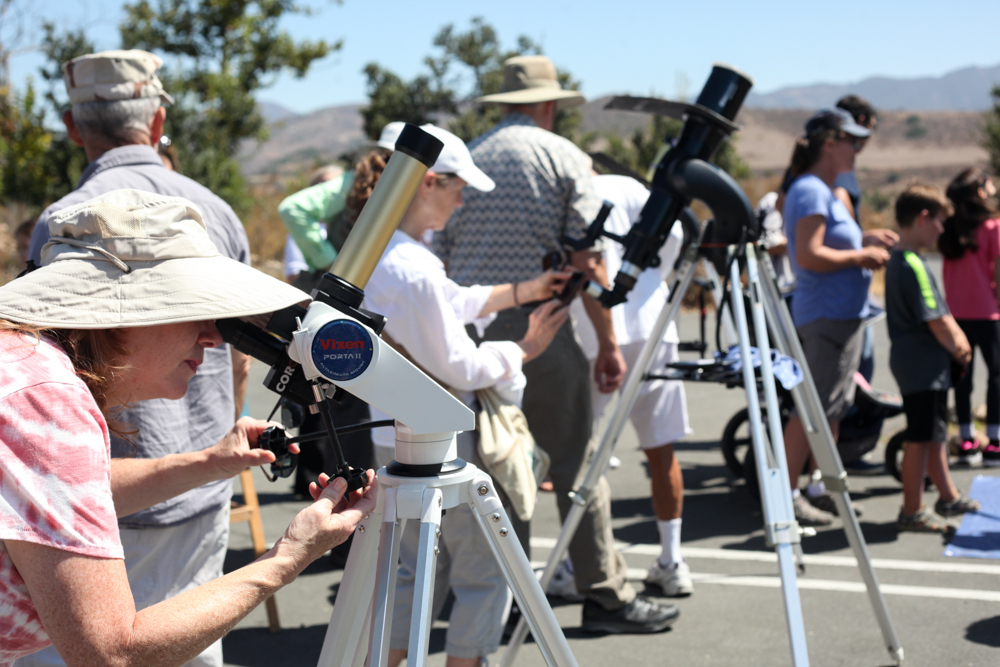 Visitors and volunteers use an array of telescopes with solar filters to view the solar eclipse on Aug. 21 in Caspers Wilderness Park. Photo: Allison Jarrell 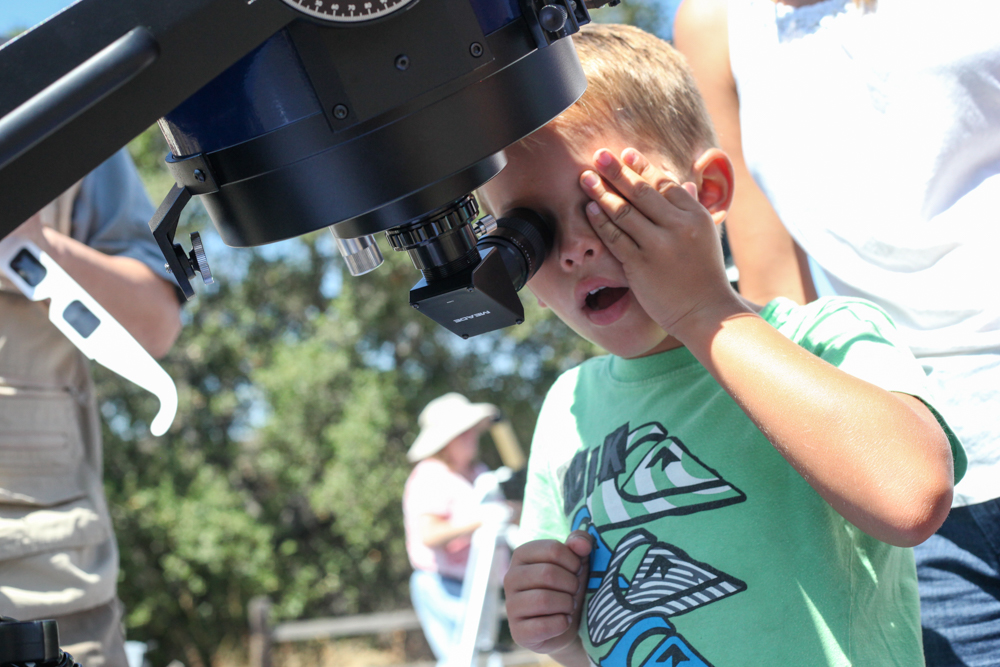 James Booysen, 6, of Ladera Ranch, gasps at the sight of an eclipsed sun seen through a Schmidt–Cassegrain telescope. Photo: Allison Jarrell

The solar eclipse, as seen through the eyepiece of a white-light telescope. Photo: Allison Jarrell 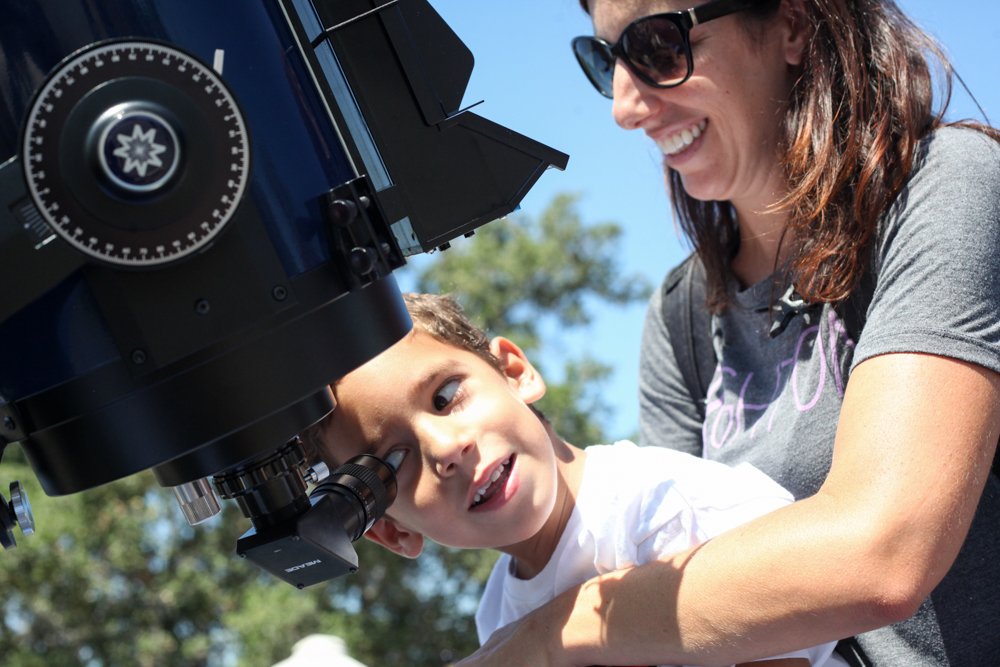 Jessica Pomares, of Lake Forest, lifts her 5-year-old son, Dominic, so he can get a better view of the eclipse through a telescope. Photo: Allison Jarrell 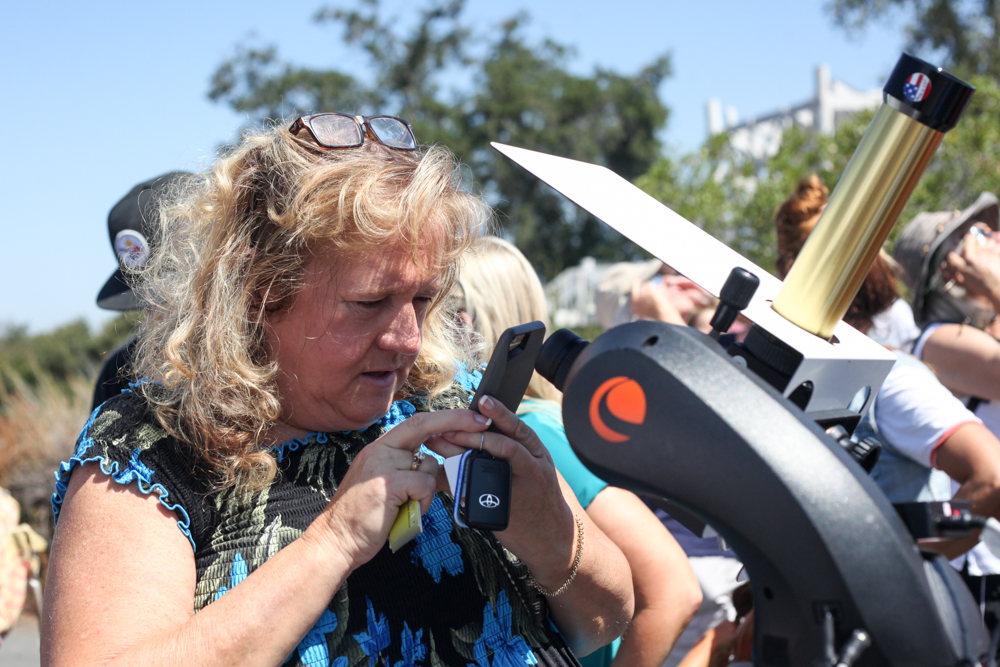 Cathy McLane, of Trabuco Canyon, uses her cell phone to take a photo of the solar eclipse through the eyepiece of a telescope. Photo: Allison Jarrell 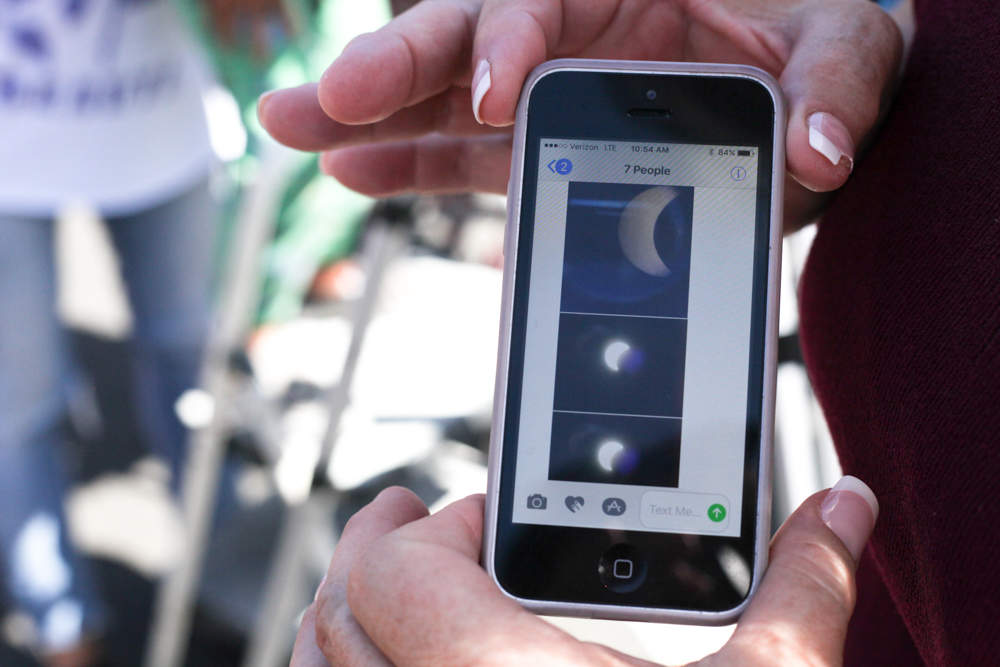 Jan Hewett, of Mission Viejo, shows her shots of the eclipse that she took through the eyepiece of a telescope. Photo: Allison Jarrell 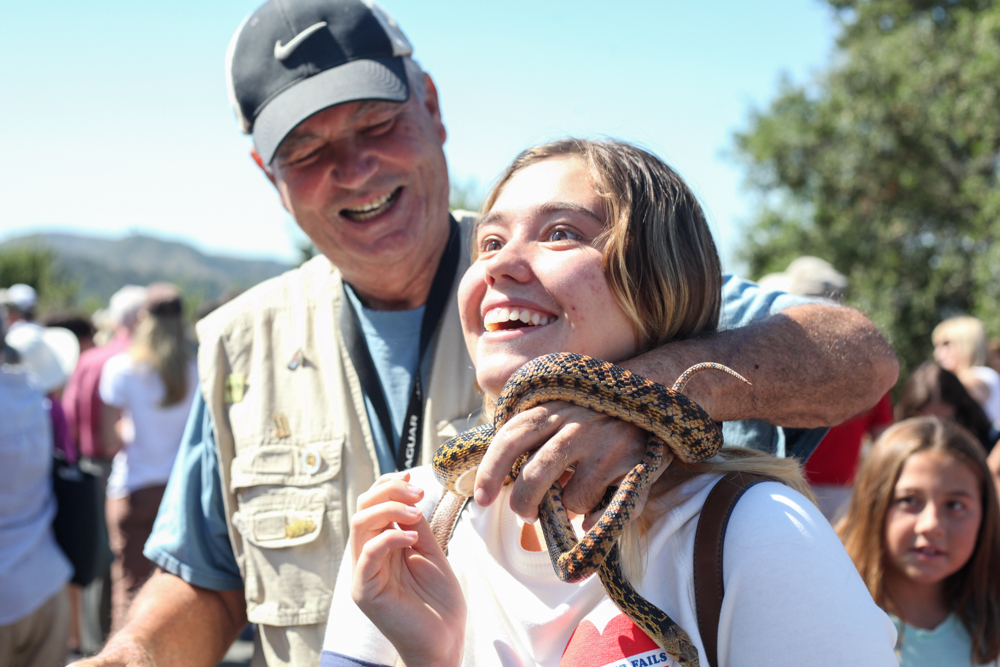 Mary Thompson, 20, of Costa Mesa, laughs as a volunteer gives her a close-up view of a gopher snake. Photo: Allison Jarrell 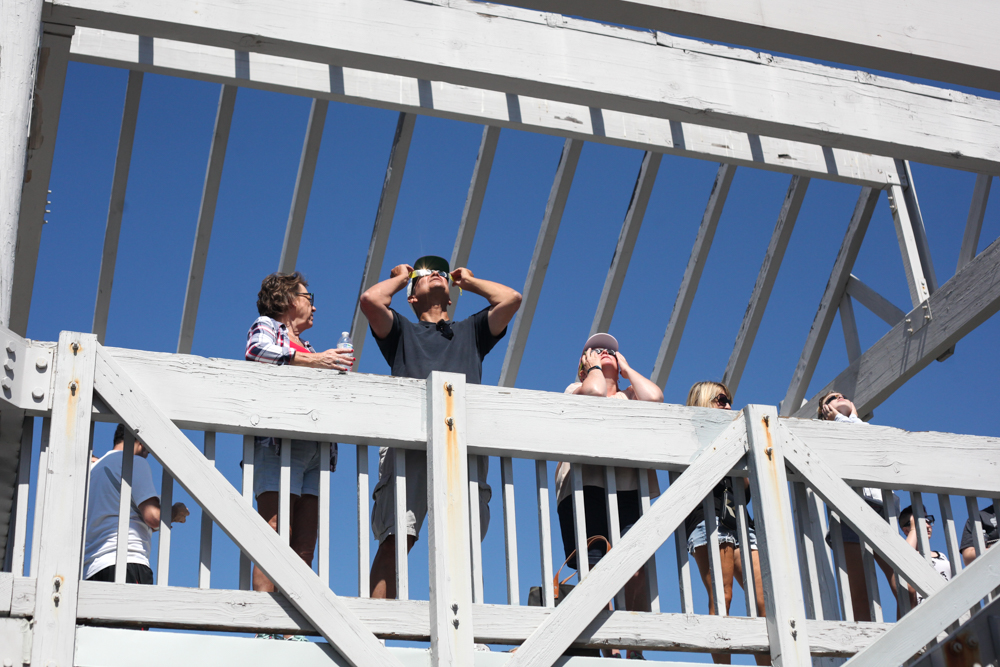 Visitors to Caspers Wilderness Park enjoy the eclipse from the top of the park’s nature center. Photo: Allison Jarrell 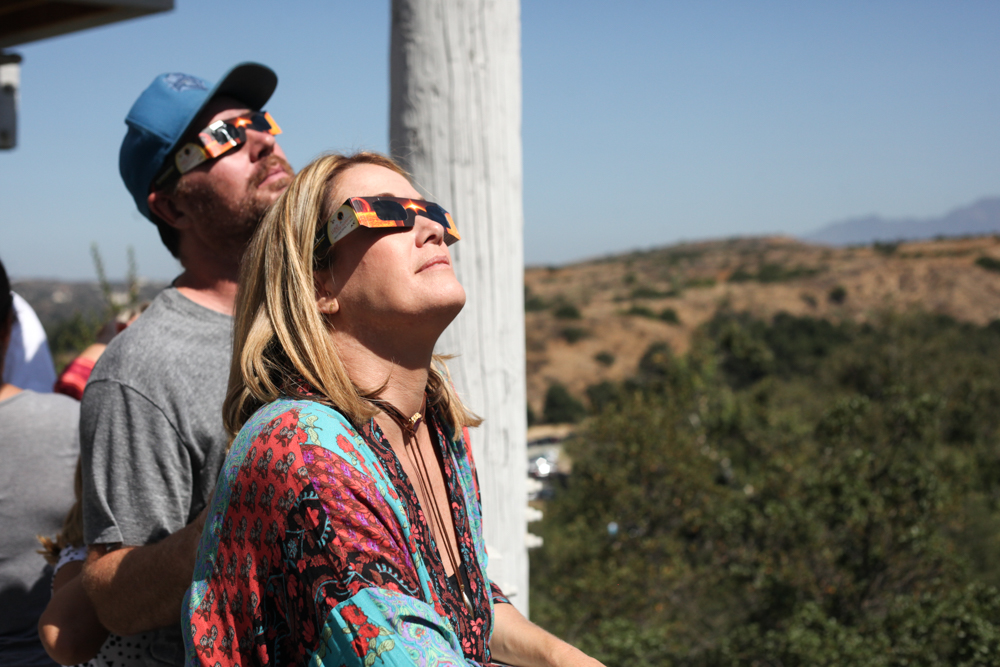 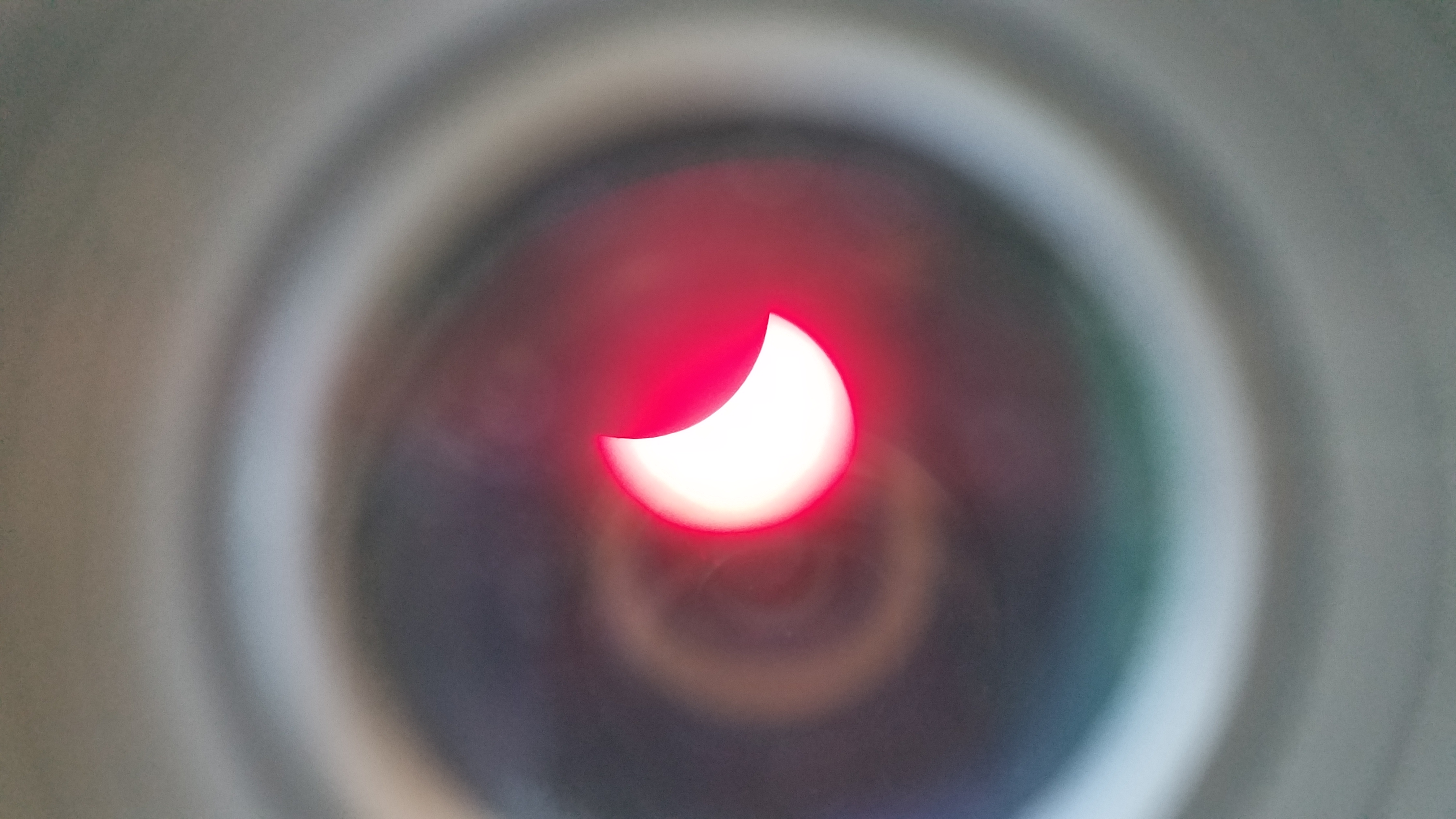 The sun is seen through a hydrogen alpha light telescope, giving it a red hue. The special telescope allowed people to see small prominences, or hydrogen gas ejections, along the edge of the sun. Photo: Allison Jarrell 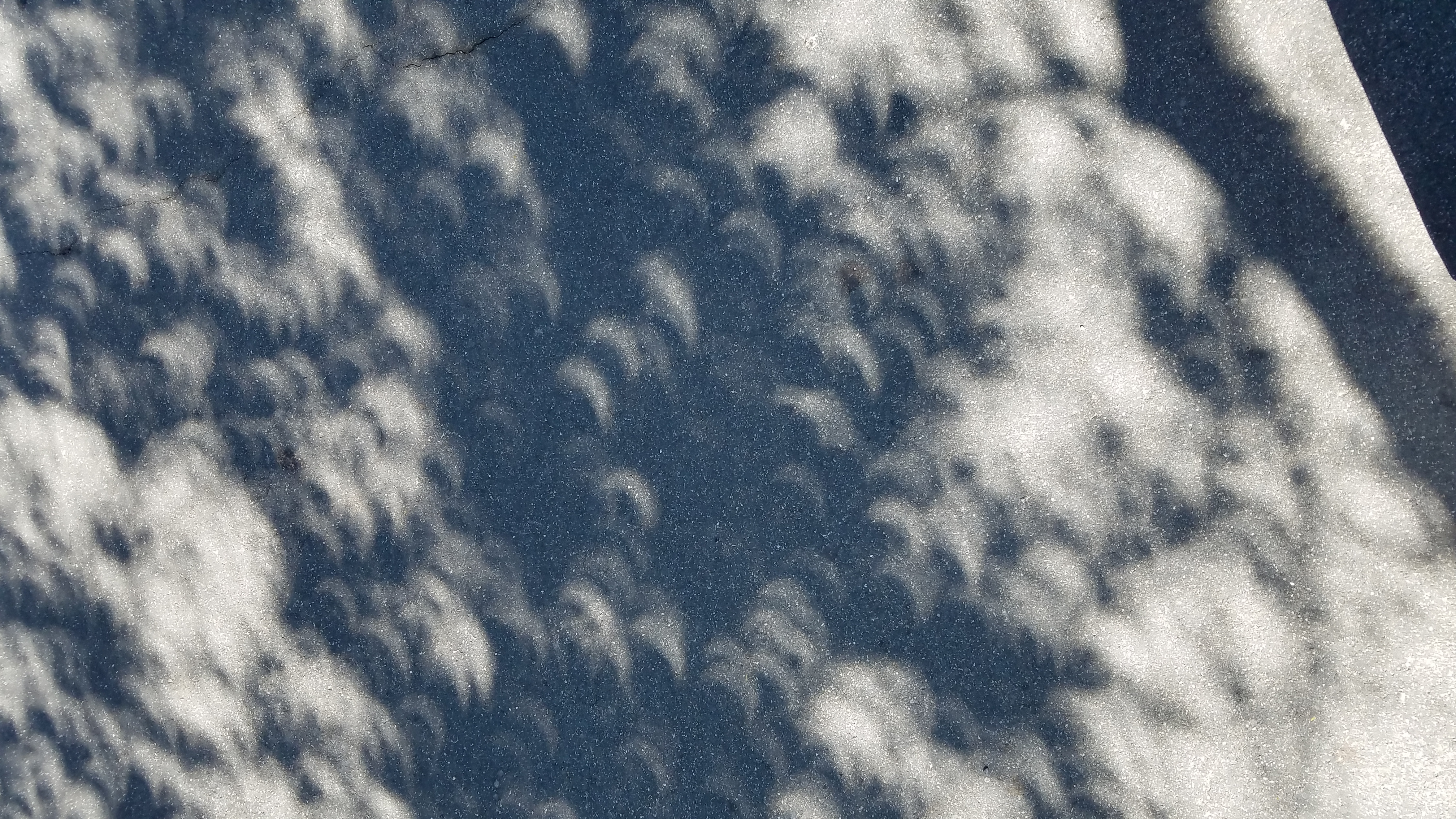 The eclipse created crescent shadows through the leaves of the trees at Caspers Wilderness Park. Photo: Allison Jarrell

White had decided to organize a viewing of the solar eclipse after his plans to travel to Casper, Wyoming fell through. He rounded up a few of his astronomer friends and volunteers, and together they brought a total of five high-end telescopes with solar filters to the park’s nature center.

White, who also holds a star party at Caspers every Saturday of a new moon, told park officials that anyone visiting the nature center during the Great American Eclipse could take advantage of the telescopes. They decided to post the event to the OC Parks website, thinking they wouldn’t get too many takers on a Monday morning.

But as the cars began to line up, White had a suspicion that the 15 pairs of glasses he brought wouldn’t last too long.

And he was right.

Hundreds of people flocked to the nature center parking lot to catch a glimpse of the rare solar eclipse, even though totality couldn’t be seen in Southern California. San Juan Capistrano saw only 60.3 percent coverage, with the peak of the partial eclipse at 10:22 a.m.

Caspers’ parking lots filled up just before 10 a.m. One volunteer said roughly 50 cars had been turned away by the end of the event due to lack of parking.

White suspects it was coverage in local and regional newspapers that brought people in droves to the park.

“Earlier, I had 500 (people) here. It was just solid in here,” White said while standing in the nature center parking lot. “It was crazy. It was never meant to be that. But it turned out alright.”

Even after the peak of the eclipse, hundreds of people continued to explore the nature center, walking around with their glasses on or standing in line to view the eclipse through one of the in-demand telescopes.

One such group of people included Mary Thompson, 20, of Costa Mesa; Quothia Wolf, 25, of Irvine; and Raymond Arebalo, Jr., 32, of Anaheim. The trio made last-minute plans to see the eclipse, trekking to Caspers on only a few hours of sleep.

They didn’t come prepared with eclipse glasses or viewing devices, but Arebalo said fortunately a man with a 10-pack was selling his extras for $5 a pop in the parking lot. (They appreciated the reasonable price after seeing paper glasses being sold for $15, $30 or even $50 online and elsewhere.)

Thompson said she would consider traveling to the path of totality for the next eclipse, so she can experience the “day to night” phenomenon. But she appreciated the beauty of the partial view.

“It’s a once in a lifetime experience,” Thompson said. “It’s fascinating.”

Astronomer Val Aikins was one of the volunteers helping White man the telescopes throughout the morning. Aikins explained that the special equipment offered guests two unique views of the eclipse.

Two of the telescopes showed the sun in hydrogen alpha light, which allowed people to see small prominences, or hydrogen gas ejections, along the edge of the sun. It was a rare treat, Aikins explained, because those prominences are something people in the path of totality are able to see with just their glasses or binoculars.

The other three telescopes—including White’s large Schmidt–Cassegrain—showed the sun in white light, which allowed guests to see sun spots. These spots, White noted, are about six times the size of the earth.

As the morning progressed, groups of friends could be seen helping each other take creative sun selfies, while others aimed their cell phones at telescope eyepieces to capture the moment. Visitors waiting in line could be heard repeating iterations of, “Hi, do you have eclipse glasses? Here, look through mine.” The small acts of generosity brought smiles to the faces of young and old alike.

Elementary school teacher Tina Hurney, of Westminster, wore her excitement on her sleeve—her shirt, sprinkled with stars and crescent moons, stood out in the sea of spectators.

Hurney had decided to stay at a hotel in San Juan on Sunday night so she could get an early start the next morning. After gazing at the eclipsed sun through one of the telescopes, she reflected on her favorite part of the morning—the excitement and energy of the crowd.

“What a wonderful event to share with the masses in a time our country needs to be brought together,” she smiled. “This brought us all together.”