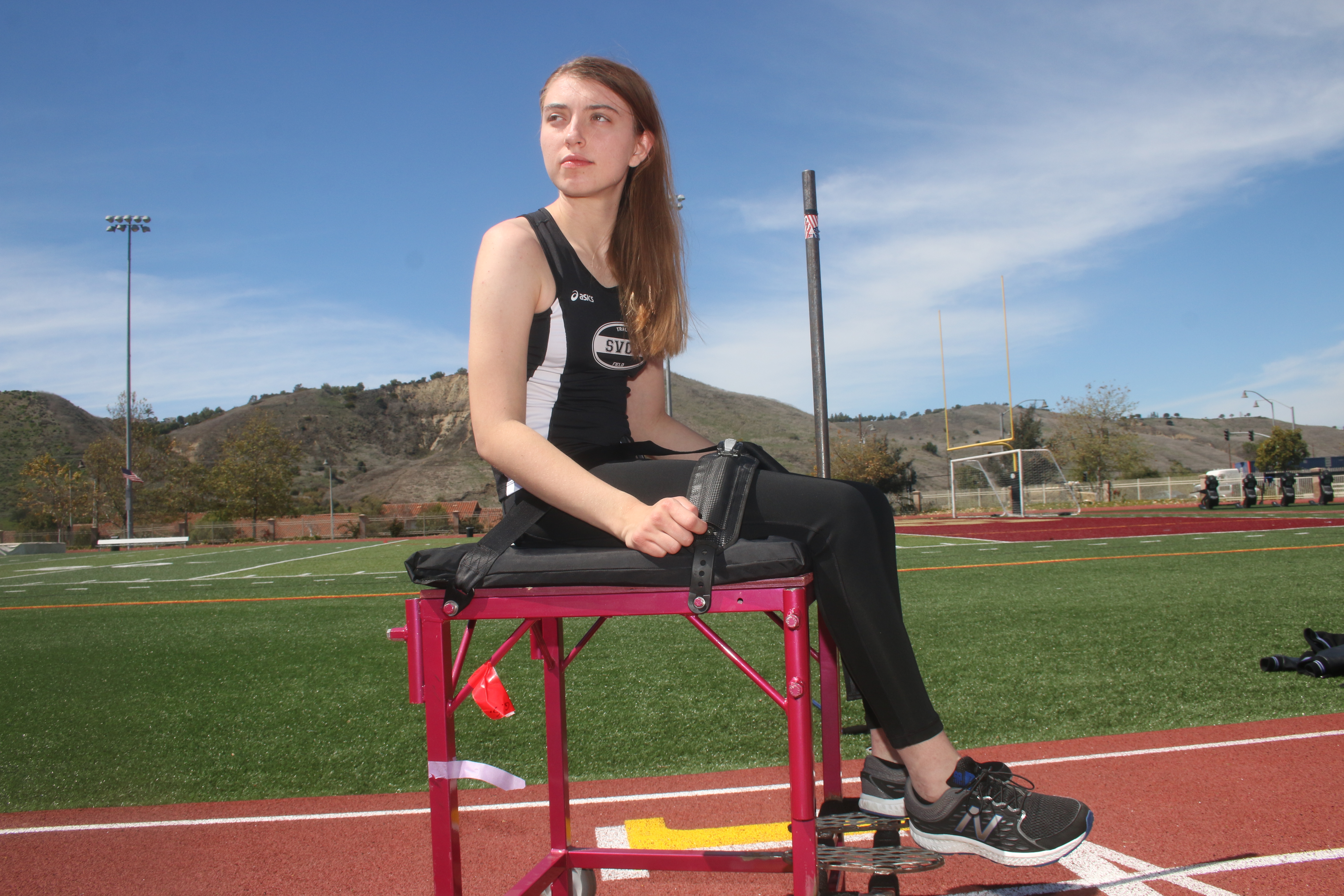 Kendall Stier is a state record-holder in the shot put.

The San Clemente resident and Saddleback Valley Christian (SVC) junior is also an All-American, a National Honor Society member with a 4.0 GPA and threw six inches over her state-record mark with an 11-foot, 9-inch throw at the ACSICS Invitational at Irvine High School on March 9.

Stier also has cerebral palsy, a neurological disorder that impairs motor function, and throws in the F-33 classification of para athletics.

“Everyone has their own obstacles and their own challenges,” Stier said. “If you were to believe what everyone is saying, ‘oh you can’t do this because x, y, z,’ there’s always going to be that ‘what if.’  Then there’s your own opinion and you have to form your own ideas of ‘this is who I am’ and I’m not going to let anyone tell me who I am because I know what I want to do and I have my own goals.”

“That’s basically what I’ve been doing for the last two years.”

Stier joined the SVC track and field team as a freshman in 2016, the same year that the CIF state body allowed para athletes to compete with their able-bodied counterparts in track and field and swimming.

Kendall and her mom and coach Shannon Stier saw the fight that went into getting that ordinance passed and are now taking on a new fight to have more para athletes take advantage of this opening.

Kendall is a SAMbassador – SAM standing for Student Athlete in Motion – for the LA84 Foundation. LA84 is a legacy from the 1984 Olympics that aims to promote youth sports and provide equal access for all sports.

“It was definitely an honor,” Stier said of being named a SAMbassador in 2017. “Now I get to be a part of process of not just students with disabilities, I get to be part of a process where my opinion on what grants should go to which foundations and help other students, kids, adults be able to play the sports they love.”

Stier is using her success and platform to promote the #PlayForAll movement and spread the word about clinics for youth para athletes.

“That’s a big problem,” Stier said. “Even though we, the para movement, have already fought legally to let students with disabilities play in high school and successfully won, a lot of kids don’t know that they can now compete in sports. We’ve been trying to make advertisements and post on social media and try to get awareness out. I definitely give thanks to LA84 as they’ve been getting the message out as well.”

Stier has also worked as an ambassador for Angel City Sports, the only para athlete clinic in California. The fourth Angel City Games will take place on June 21-24 at the University of California-Los Angeles with clinics and competition in track and field, swimming, archery, wheelchair basketball and wheelchair tennis.

Kendall will continue her work in raising awareness and raising her own game as she competes next at the Arcadia Invitational on Friday, April 6 and looks forward to another potential state title. With developments at the college level to allow para athletes to score points in regular track and field competitions in some eastern conferences, she will continue to push for that on the West Coast and try to inspire other high school para athletes to join her on the field.

“All you have to do is go to your track and field head coach and say ‘I want to play’ and you’re on the team,” Shannon Stier said. “That’s it.”