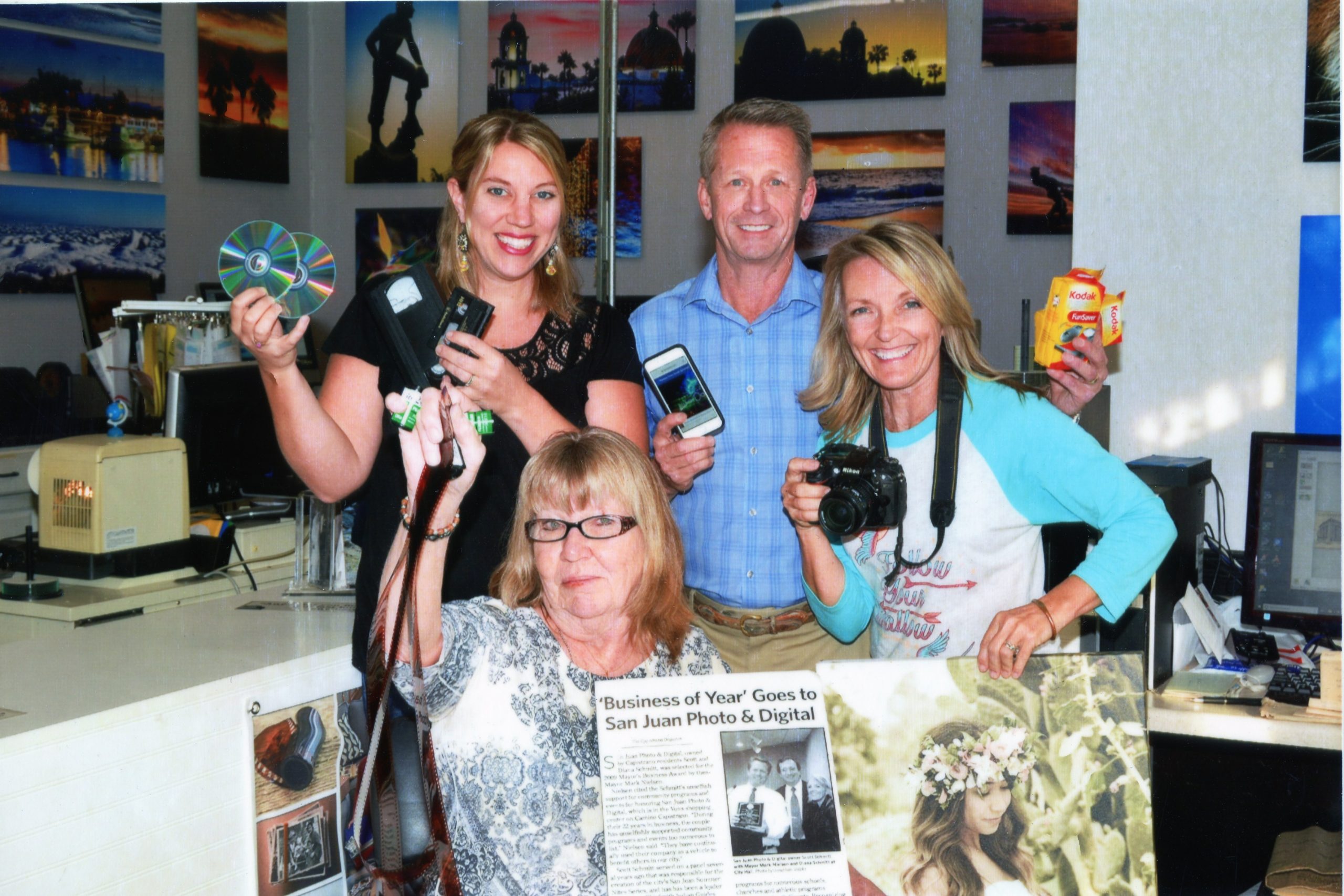 By Lillian Boyd, The Capistrano Dispatch

Owning and running a photo lab and studio for 35 years, Scott and Diana Schmitt are offered intimate glimpses into the various stages of life and death.

“One day, all you’ll be able to leave behind is photos of you,” said Cheryl Wayland. “Make sure you’re in them; it won’t matter what you look like or how your hair looks—what will matter is what you meant to the person holding onto the photo.”

Wayland has been with the company since 1990 after previously working in bookkeeping.

“I had no prior experience with photography,” she said. “I remember being hired and Diana saying to me, ‘Welcome to the wonderful world of photography.’ “

Whether tasked with developing photographs or hired to take photos, the staff at San Juan Photo & Digital have seen it all: babies, birthdays, graduations, weddings, memorials. Scott says the crew now handles orders for second- and third-generation customers.

“We’ve come a long way since we first started our journey,” Scott said. “We were here before Costco and other major corporate photo labs came to the region. We’re still here.”

The journey began when the Schmitts took over a Moto Foto franchise location in San Juan Capistrano in 1989. By the end of the ’90s, the couple broke away from the franchise to become San Juan Photo & Digital.

“When we started, it was a good time to be in the industry,” Diana said. “Then Costco came in, they bought Fuji machines, using all the vendors that make up the industry. At the expense of other businesses struggling to compete, Costco was charging 19 cents a print.”

“When you run a business like that, as hard as it sometimes is, we still had this feeling that we were doing the right thing,” Diana said.

The business also withstood the trials of 2020—a pandemic that continues to weigh on the economy, as well as personal tragedy. Jenna Wayland, a San Juan Photo & Digital employee and daughter-in-law to Cheryl Wayland, passed away in September after her diagnosis of cancer.

“She was the kind of person where if you met her once, you’d remember her,” Cheryl said. “She’d light up a room.”

Before Jenna died, she arranged to have photos taken of her and her family.

“It’s so important to have these memories,” Cheryl said. “Her daughters are now 4 and 6. They absolutely love the photos of their mommy, and that’s all they’re going to have for the rest of their lives. These kinds of photos are so important.”

Diana says the loss of Jenna reminds her how fragile life is.

“I’ve had my own bout with cancer. I am humbled by life. There is no judgment here,” Diana said. “People come in with so many great stories and experiences, whether in dealing with life, love, tragedy … we see that in their photos. We get to see the humanity—which is a privilege.”

The Schmitts say they hope to continue serving the community, despite the shifts and challenges in the industry.

In January, Costco announced it will be closing all of its photo centers companywide, effective Sunday, February 14. While customers can still order various print products through Costco’s online services, it will no longer offer ink refills, passport photos, photo restoration or the YesVideo Home Movie Transfer service.

San Juan Photo & Digital continues to offer printing, camera repair, scanning, photo restoration, classes for those looking to take their skills to the next level, and film processing. Scott says he and Diana have seen a wide range of new clients come in—from first-time film users in their teens and 20s, to people bringing in their parents’ rolls of film, to older photographers who never migrated to digital shooting.

“It’s bringing the joy of photography back,” Scott said. “They’re coming in, and it’s like Christmas morning. They can’t wait to see their prints—they have something real to hold onto.”

Scott has previously said that years ago, he and Diana could count on 150 rolls of film coming in every Monday. But after film fell out of fashion, there were times when they considered getting out of the processing business.

“But we hung in there,” Diana previously said. “That’s a good message in life—just stick with it. We’re glad we’re still doing it. We’re the last man standing.”

She adds that one benefit to film photography is you have to be methodical before you click.

“The thing about film is it’s definitely organic … the actual process of film is interesting,” Diana said. “It’s a tough medium. Film is actually plastic with a gelatin top and bits of silver sitting on top. It’s got that grain and grit to it. When you press that click button, it’s an intimate experience. It really makes you think. It’s like vinyl albums … a throwback to another era.”

Cheryl works primarily on the technical side of photography, processing and developing film and overseeing equipment.

“I ended up loving the technical side. As years have gone on, I’ve been needed more at the machine, doing customer service, spreading photo happiness across South County,” Cheryl said. “I get to help bring joy to people through their own memories.”