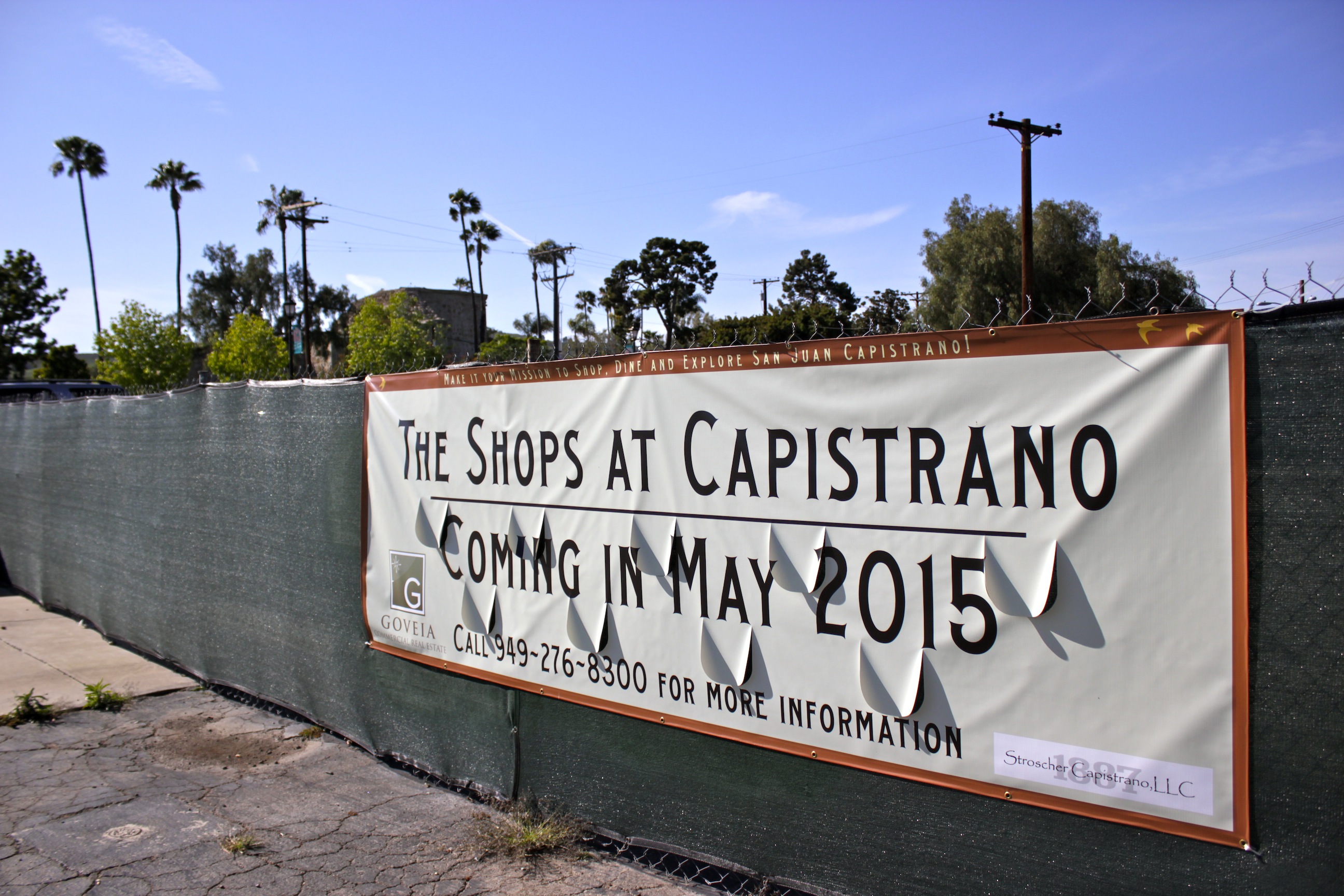 The San Juan Capistrano City Council on Tuesday directed city staff to study a project to build a shopping center between Mission San Juan Capistrano and Interstate 5, but some local leaders decried the current proposal, calling it an inappropriate addition next to the city’s most iconic landmark and at its gateway.

Dana Point-based developer Goveia Commercial Real Estate wants to build a 41,000-square-foot shopping center, called The Shops at Capistrano, on a 3.54-acre site, located on the northeast corner of Ortega Highway and El Camino Real. The project includes three single-story buildings, one 12,000-square-foot space for a grocery store and 194 parking spaces. A portion of the current property is currently leased to the city on a monthly basis as public parking.

Landowner Gretchen Stroscher Thomson had planned to build the 124-room Plaza Banderas Hotel at the site, but after struggling for five years to find a willing developer, she abandoned the project in November in favor of a shopping center.

The project lies within the Historic Town Center Master Plan, which sets land-use guidelines and aims to improve circulation and preserve the historic character of 150 acres in the heart of the city. The plan was approved in 2012 with the hotel in mind.

While the land’s current designation, “general commercial,” seemingly allows for a shopping center, markets aren’t allowed by the plan. Changing the land-use designation to “planned community” could allow for the project, and a site-specific development plan would open the door for the market.

James Bickel, the architect for the project and a San Juan Capistrano resident, said the market space would not allow for a large chain store, which typically requires 45,000-55,000 square feet. He also said the shopping center would be designed to respect the nearby Great Stone Church at the Mission by having smaller buildings and a pedestrian plaza oriented toward the structure.

Mechelle Lawrence Adams, the Mission’s executive director, called the shopping center a “strip mall” and asked council members to “just say no from the beginning.”

“When I walked out to El Camino Real to look it over, I just couldn’t buy it,” Lawrence Adams said. “I couldn’t tear myself away that this is the gateway.”

City Councilman Larry Kramer was the lone dissenter in a 4-1 vote. He questioned the need for another shopping center, when existing ones in downtown had several vacancies. Kramer also noted that council members and residents were critical of another proposed project in downtown, the San Juan Hotel & Villas, encroaching on the historic Egan House. But while the Mission’s Great Stone Church is on the National Register of Historic Places, he said, the Egan House isn’t.

“It’s world famous and we’re considering saying we don’t care what’s across the street from it,” Kramer said. “That makes no sense to me whatsoever.”

Former councilwoman Laura Freese, who worked on the master plan and is now chair of the city’s Economic Preservation Committee, said she was concerned that a strip mall would be located at what is essentially the gateway into the city.

“(Bickel) says it may not look like a strip mall, but it sure does to me. What I can’t help but envision is trash and dirt like other strip malls in this town have,” Freese said. “What I’m worried about is a 99-cent store being our gateway.”

Jonathan Volzke, founder and former editor of The Dispatch, said the city needed to develop a new retail project to attract more desirable businesses and keep people in downtown.

“This has the opportunity to stop sales-tax leakage. People leave our town to shop,” Volzke said. “This would bring people to our town to shop. It would help our downtown function better.”

“If you want to call this a strip mall, maybe it is. I’ve seen some very nice ones done,” Allevato said. “I just think we need to get critical mass downtown to keep it vibrant and keep people coming.”

Bickel said designing a shopping center on the site poses a challenge because its topography drops steeply from the street level. He said when construction on the Ortega Highway/I-5 interchange is completed, the site may be 23 feet below grade.

In a separate agenda item, Goveia was denied a request to stockpile 15,000-18,000 cubic yards of dirt to address floodplain issues. A motion by Councilman Derek Reeve to approve their request failed for lack of a second. Council members said it was too early in the process to transport dirt to the area.

“If we had approved bringing in stockpiled (dirt) for Plaza Banderas, it’d be sitting there for 4-5 years now,” Kramer said.