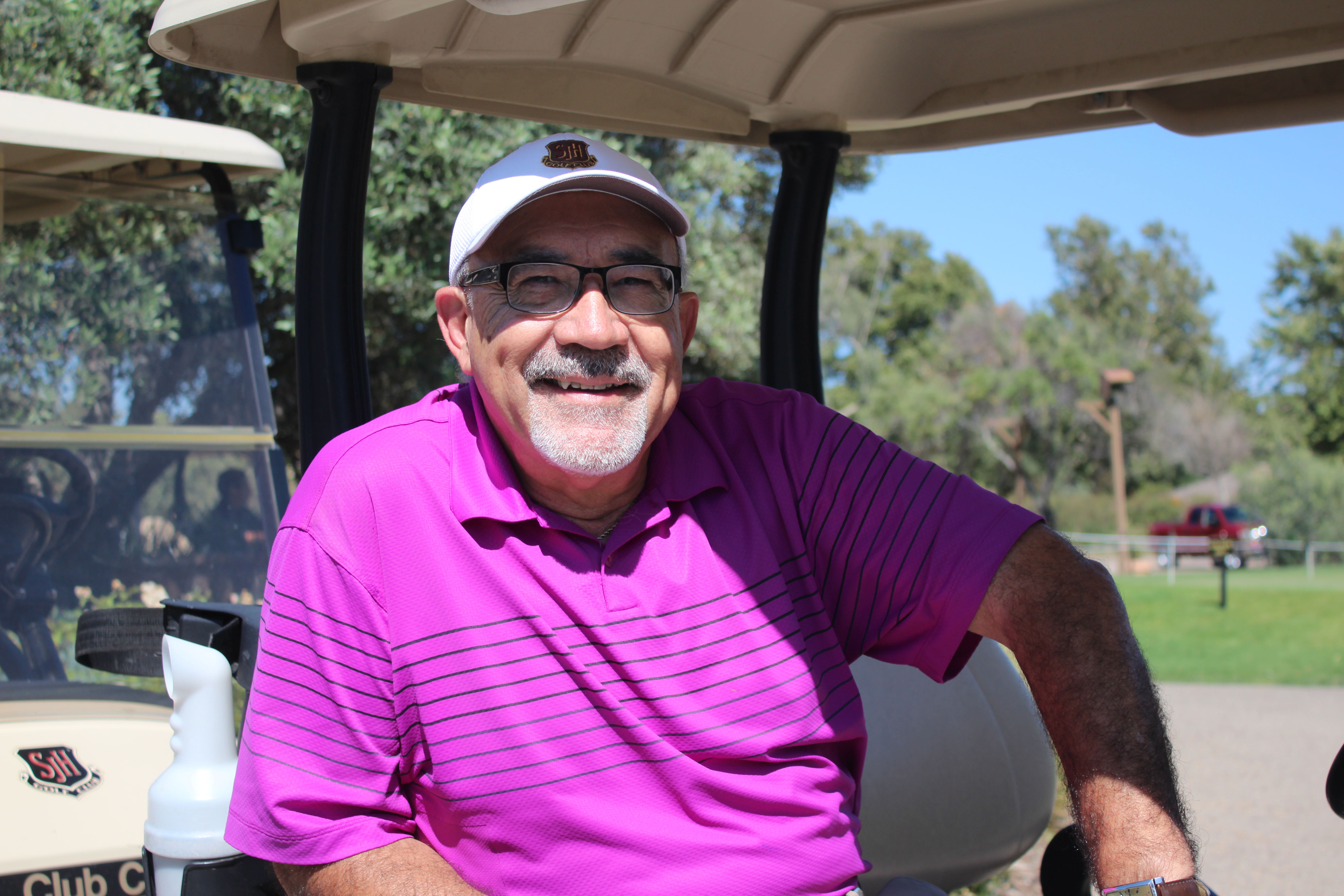 Ray Ricardo fell into becoming a certified PGA instructor and head golf professional at San Juan Hills Golf Club. After graduating from the University of Hawaii, where he played for the football team, Ricardo entered the food and beverage services industry. He owned restaurants, tended bar and cooked.

When he returned home to Orange County, he became a regular at San Juan Hills. One day, when the kitchen was empty handed, an employee who knew Ricardo asked him to jump on the line and help out. After spending a few hours cooking, Ricardo was asked to help out at the bar, another place that needed an extra hand. Never one to say no, Ricardo stepped in and performed well enough to grab the attention of the owners. He was offered a job and began working part-time in the kitchen and bar.

“That was over 22 years ago,” Ricardo recalled with a smile while sitting on the patio outside the course’s clubhouse on a Wednesday afternoon.

We sat down with Ricardo, who has been the club pro since 1995, to get his thoughts on how to have a good round, the state of golf in Orange County and how a leopard shark once caused his email inbox to overflow.

THE CAPISTRANO DISPATCH: Unless you are a golfer, not many people know exactly what a head pro does. What’s a normal day like for you?

RAY RICARDO: Every day is different, really. I do the operations in the pro shop, the sales. I control the tee box and make sure everyone is here doing their jobs. I make sure we are prepared and ready to go when the door opens. I make sure the flow of traffic on the golf course is steady, ensure the safety of the golfers, maintain pace. Greet and treat people the best possible way and make them feel comfortable and relaxed.

CD: I heard a story that you set the course record out here but you did it in an unusual way. Tell me about that day.

RR: The first time I set the record, I tied it another time, I did it with an old Daiwa ladies driver. It just so happened that my driver was being repaired, so I had the Daiwa from one of our rental sets and I borrowed it just to go play.

Man, I could talk to that driver. I could go left, right, high, low—whatever I wanted to do with that driver, I could do. I hit it a decent distance, but I could control it. That’s when I figured out you don’t have to bomb the ball 300 yards to score well. You just have to be able to control your play. With that driver I could do that. I shot a 60 but had to add a stroke and make it a 61 because the course was playing under different conditions. Turns out later someone borrowed the driver and broke it. I was going to cry, it was like losing a girlfriend (laughs).

CD: Slow play is a hot-button issue here in Orange County. How do you attempt to address that problem here at San Juan Hills?

RR: I always say play well and play fast. If you don’t play well, still play fast. I tell people that and it sticks in their minds.

What happens a lot of times is that people are so disrespectful to the people behind them. They don’t care. All we ask is to keep up with the groups in front of you. Enjoy yourselves but keep in mind the people behind you as well. Play ready golf. If you’re ready to go, go and hit it.

CD: What’s the weirdest or funniest thing you’ve seen out on the golf course?

RR: I was playing on a course in Hawaii one time. This guy in the men’s club there had a real bad temper. Whenever he played bad you knew about it. He would yell and scream and throw clubs and stuff. So one day we got done and he was playing behind us. We were watching from the clubhouse. He comes in and had a bad hole.

After they got done playing, he grabs his bag and throws it in the lake that was next to the hole. Later we see him walk down to the lake with a cart guy and he tried to give him money to get in the lake and get his bag. The kid said no, so he goes in there and gets his bag, brings it out to the side, takes his wallet and keys out of there and boom, throws it back in the lake.

CD: This course made national news when a leopard shark was found out on a tee box. What was the response you got when that happened?

RR: It was all over the internet. I had a guy I know in Brazil and a guy in Chile send me emails. Even Tiger Woods tweeted about it. All over the country, I got a bunch of stuff. People asked ‘What will you guys do for business? That can’t be true,’ and I had to say, ‘Dude, it happened, I was here.’ But it was a big, big deal. I wish we would’ve known what happened to the shark. The guy who went and dropped him back off in the ocean said he saw him swim away, so hopefully he’s still out there.

CD: What’s the best advice you can give to the average golfer?

RR: A lot of people don’t understand that golf is a game of opposites. The harder you swing, the less distance you’re going to get. Everyone tries to swing so hard and hit it so far that it’s not going to go anywhere. So to me, tempo is so important … You can see a guy who is 5-feet-8-inches tall who has a great swing, he can hit the ball 300 yards. Then you see a guy who’s 6-feet-4-inches try and kill the ball and it doesn’t go anywhere.

The most important thing out of all of it is just go out and remember to enjoy golf. It’s just a game. You forget it’s just a game. You cannot completely dominate this game, you can’t control everything. You can have days like that…But it is a game of mishits. The guy with the least amount of mistakes is going to win.