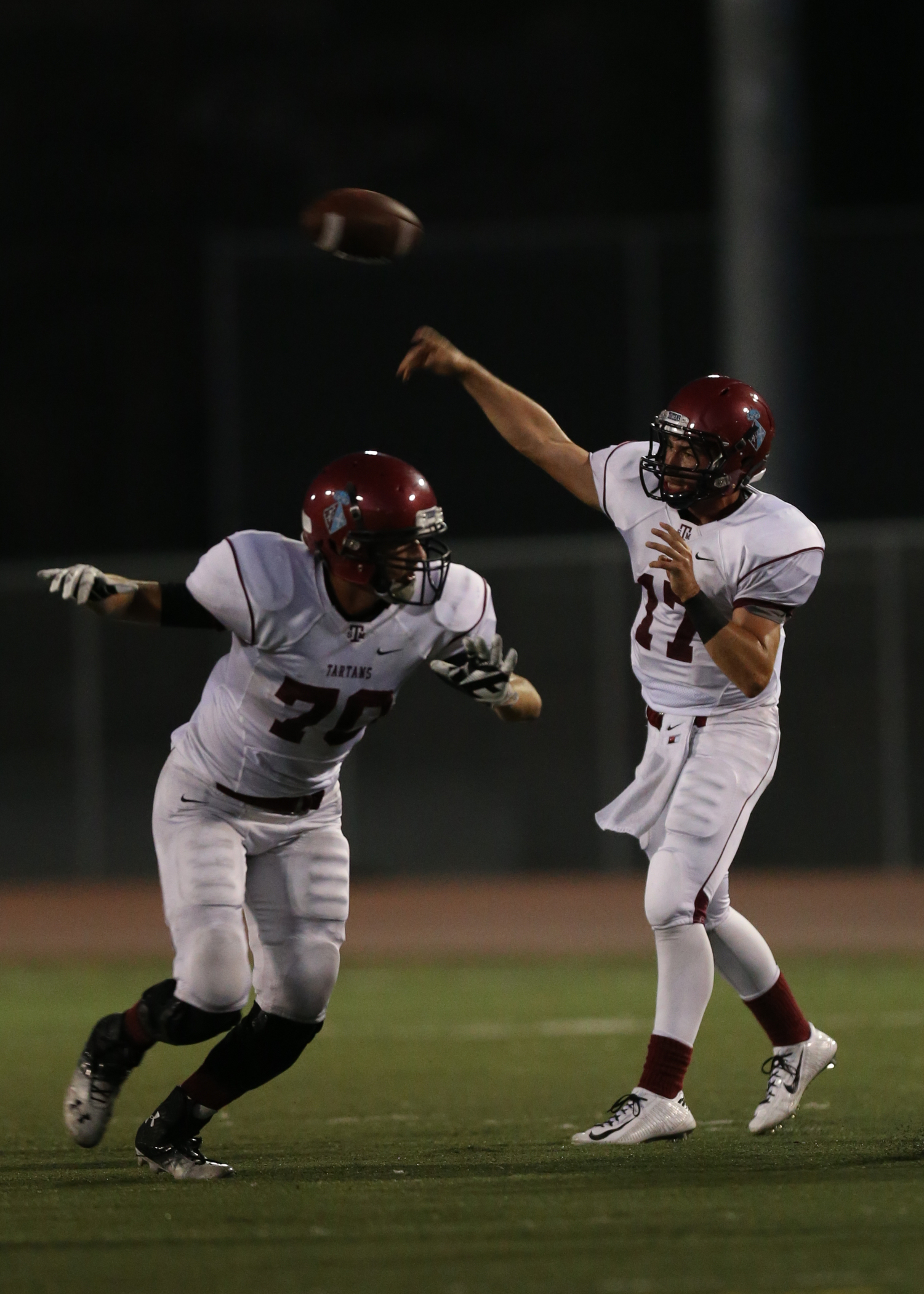 Senior Ryan O’Hare did not have the envious position of stepping in at quarterback for the St. Margaret’s football team this offseason. O’Hare was replacing former standout Josh Davis, a three-year varsity starter who was among the most productive athletes in school history and took the program to lofty postseason heights, including an appearance in the CIF-SS East Valley Division title game in 2013.

Needless to say, the expectations are high for 2014, as the Tartans return several key players to the roster.

But the pressure has not rattled O’Hare, who has calmly guided the Tartans to a 2-0 record this season. O’Hare has been leading a potent offense that has scored 94 points in two games and is set to face Whittier Christian tonight at home at 7 p.m.

We caught up with O’Hare to get his thoughts on earning the starting job and how he’s handled running such a prolific offense.

The Capistrano Dispatch: What was the pressure like when you learned you were going to take over at quarterback after Josh Davis?

Ryan O’Hare: Josh was a great quarterback. They are big shoes to fill having to fill in for a guy who is playing at Lafayette and in Division 1. But when I was told I’d be the starter I never thought ‘Oh no, I have to fill Josh’s shoes’. I thought, great, let’s prepare for week one. And that’s the way I’ve been looking at it every single week, every game.

I’m not concerned with how many passing yards I have at the end of a game. If I had five yards passing and we win… I don’t care it’s a win. I don’t know if that matches up with what people want to see. But I’m more concerned with matching (Davis) in wins than his stats.

CD: What’s the biggest difference between this year’s team and last year’s version?

RO: It’s a different environment in practice. Last year people were able to turn on a switch during games. Now, people are ready for the whole week of practice. And I think that shows with the scores. People can say you’re playing lower ranked teams but I think our scores so far show how much work we put in and how much better we prepare than the other teams.

CD: You’re surrounded by versatile playmakers like Nick Shanks and Oscar Gomez on offense, what’s it like playing with them and how do you get them all involved?

RO: It makes my job easier. There’s always a lot of pressure playing quarterback and to know I have four good receivers and two good running backs makes my life a lot easier. I can get the ball to the running back and not worry about losing it. I’m confident they can get us that 10 yards when we need it. And the receivers will get those yards.

It makes our offense more versatile and a lot more deadly when you have as many weapons as we do.

CD: You played linebacker last year. Do you miss playing defense at all?

CD: You guys play Whittier Christian tonight. What do you know about them and what kind of game are you expecting?

RO: We’re going to have to show up. Any time we expect a win to be in the column it’s a loss as far as we’re concerned. They’re showing good cover-1 and cover-4 so it looks like they’re confident in their players. But I’m more confident in mine.