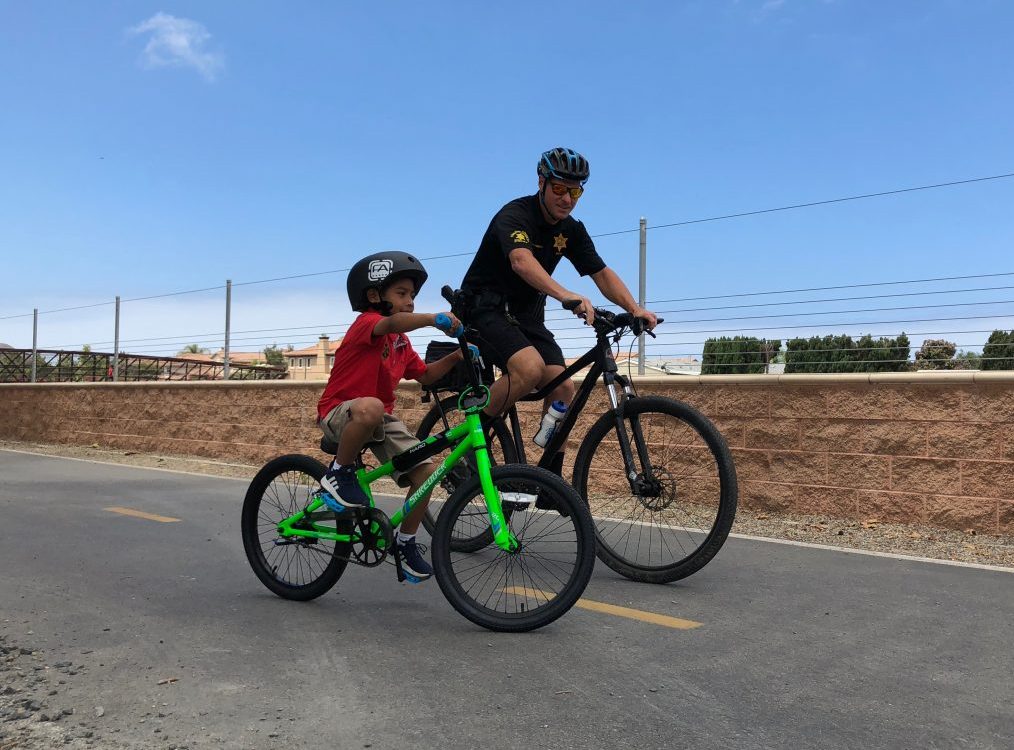 The 6-year-old boy jumped off his bicycle when the car struck, doctors say his helmet spared him of major injuries

Fear inserted itself into a San Juan Capistrano family when a mother and son were riding their bicycles along Camino Capistrano in the afternoon of Wednesday, June 6, when a car ran a red light and struck 6-year-old Roque Antonio.

Roque’s mother, Luz, was overcome with panic when he couldn’t see Roque as the car crunched over her youngest son’s bicycle, until it drove off and she saw him on the sidewalk, unharmed. In an act of imperative timing, Roque leaped off of his bicycle and onto a sidewalk near the intersection of Camino Capistrano and La Zanja, at around 5:45 p.m.

“Little Roque was out riding his bicycle with his mother, doing everything he was supposed to being doing, wearing his helmet and paying attention to his surroundings,” San Juan Capistrano Chief of Police Lt. Carl Bulanek said. “He went to cross the street and a vehicle ran the light and struck him. He was paying attention to what was going on, he was able to jump off the bike just as his bike was being hit by the vehicle, and ultimately the doctor—he was transported to the hospital—said that by wearing his helmet, it kept him from sustaining major injuries.”

Bulanek commended Roque on his actions and attentiveness to his surroundings, at a press conference behind San Juan Capistrano Police Services on Monday, June 18, where Orange County Sheriff’s Department (OCSD) staff, local businesses and community members came together to support Roque and his family.

During the event, Roque got a surprise that brought a smile that only an eager 6-year-old can bear: a brand new bicycle. Jim Curwood, owner of Buy My Bikes in San Juan Capistrano, donated the bicycle to Roque during the event.

“Thank you, everybody, for my bike,” Roque said to a small crowd of heartmelted, badge-wearing deputies.

Curwood, who just celebrated Buy My Bikes’ 40th anniversary this week, said he enjoys working with the community in instances like this.

“It’s very fulfilling and it’s something he’ll never forget. I’m just thrilled he didn’t get hurt,” Curwood, wearing his famous bumblebee costume, said. “And, he should be able to ride the bike for the next few years (until he grows out of it).”

OCSD Deputy Rob Miranda, a part of the Sheriff Department’s bike team and a former BMX racing professional, rode his bicycle next to Roque for nearly 20 minutes to help him get used to riding again. Miranda performed small stunts including wheelies next to Roque as they rode back-and-forth a stretch of the San Juan Capistrano Bike Trail near Police Services, as Roque ardently asked to keep going as his confidence was being built up.

“This is big because the community’s coming together to help a little kid who was hit by a car, and a little kid at that, who went through a traumatic event,” Miranda, who joined OCSD in 2007, said. “Anytime you get hurt, crashing your bike is a big deal to a kid. Coming together and getting this kid back on a bike is huge, helping this family is what it’s all about.”

Miranda said it’s important for kids to wear the helmets, as it’s saved him from major injuries over the years as well.

“It’s always important to have the right safety gear on, your helmet has to be the right size, buckled of course, and make sure you are bright and visible so cars can see you,” Miranda said.

Bulanek added, “Unfortunately, so many people these days—not just kids, but we see adults doing it all the time—they just go across the street, are on their cell phones, even at 6 years old, (Roque) had the wherewithal to be cognizant of his surroundings and jump off his bike.”

Roque’s brother, Jonathan, 19, said that his entire family are still breathing sighs of relief of their youngest member’s close call.

“He’s the youngest, so he’s definitely the most loved/spoiled from all of us,” Jonathan said. “We all just love him, and receiving the phone call that something just happened to him—that he was in an accident— that was terrifying. It was heartbreaking.”

Jonathan, who also works at the YMCA in San Juan Capistrano on Del Obispo Street, said that he credits Roque’s helmet for his escape of major injuries.

“I think it was a huge eye opener for all of us, and I work at the YMCA, and I reinforce the importance of wearing a helmet, especially now that this happened to us—it could happen to anyone,” Jonathan said.

The driver fled the scene after the hit, Bulanek said, but was located thanks to witnesses who saw the incident.

“(Roque) was very fortunate to come out with minor injuries as a result of his upbringing and parents instilling the need to wear a helmet and follow the rules of the road,” she said.

Bulanek said he wants to highlight the actions of Roque and hopes other cyclists ride safely.

“He was very fervent and very clever doing what he did to keep himself from being seriously injured,” he said.

Jonathan said that at the YMCA, on Tuesdays, children are encouraged to bring their bicycles and helmets to the YMCA, as they have supervision. YMCA Child Care in San Juan Capistrano is located at 25591 Camino Del Avion and can be reached at 949.493.4315.

“It’s the safest way for us to enhance that experience of riding a bike while being safe,” he said.