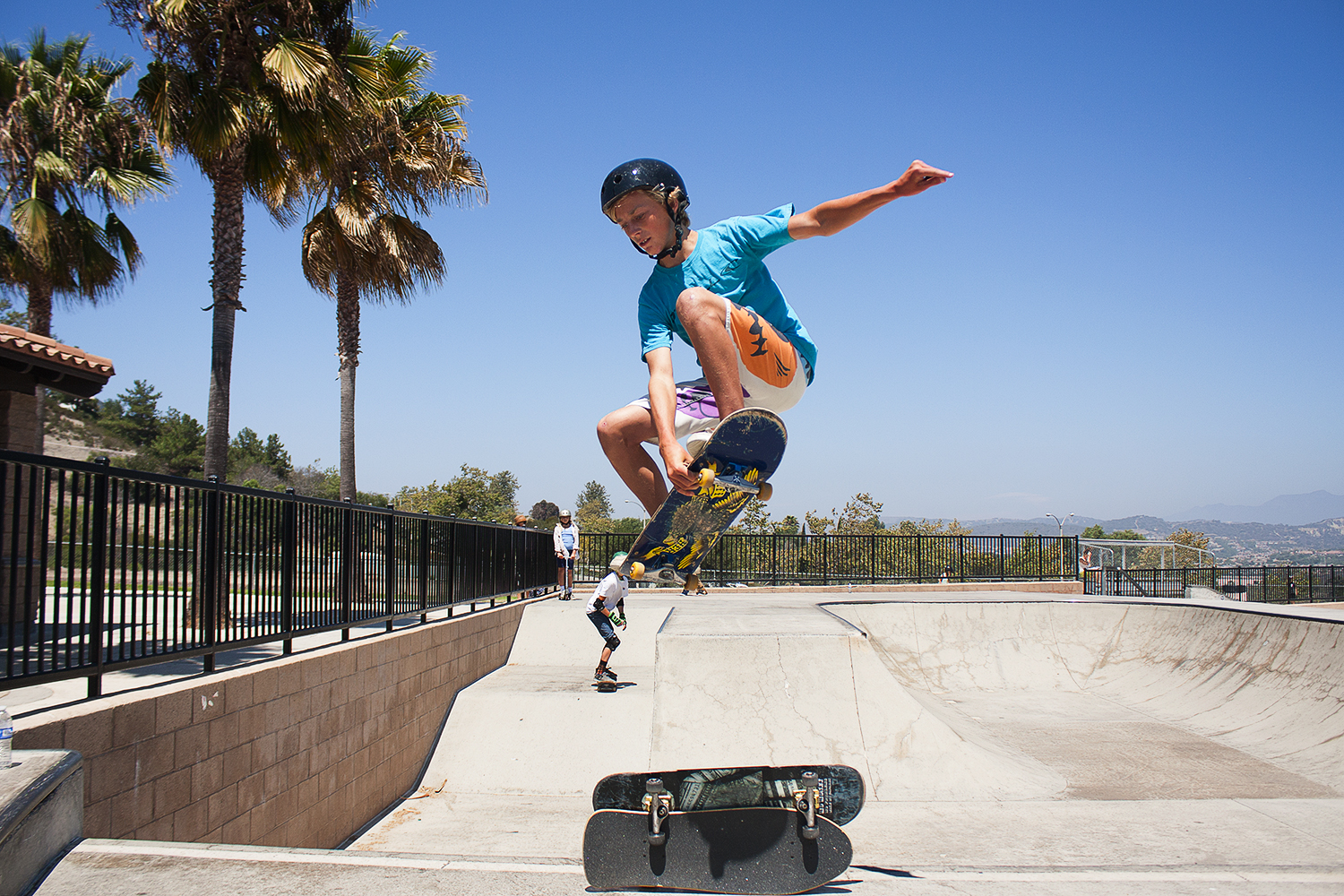 San Juan teen Ruben Villamil is one of an estimated 725 skateboarders living in the city of San Juan Capistrano. You could also say he’s one of the roughly 190 really active skaters in town—he even brought his board to Monday night’s Youth Advisory Board meeting.

Monday’s meeting was an important one for Villamil to attend, and he wasn’t alone. A room full of kids, teens and adults gathered to discuss a common goal—bringing a skatepark to the cities of San Juan Capistrano and Dana Point.

Villamil started skateboarding when he was about 12 years old. He grew up watching the older kids around him roll around town.

“I started getting interested in (skateboarding), but I noticed that there are no parks in town,” Villamil said. “San Juan needs one, because the other parks are far away, and no one wants boarders skating on their property.”

Villamil started a Change.org petition back in February in the hopes of rekindling such a discussion, and so far he’s been backed by 135 eager supporters. But skatepark advocates who spoke Monday night acknowledged that while social media outreach is vital for a grassroots effort, partnerships between the cities’ youth and leaders need to form for sustainable progress to be made.

“We’re at a point where we kind of need to create momentum on getting a park built and the young people in the community are incredibly important to that,” said Aaron Spohn, a Los Angeles-based skatepark advocate. Spohn is internationally renowned for launching upwards of 1,000 skateparks across the U.S. and abroad, and some enthusiasts may know him as the guy who teamed up with ESPN to develop the X-Games.

Spohn said he’s willing to help bring a park to town, offering his guidance as both an educator and organizer. During his Monday night presentation, Spohn spoke about the benefits of skateboarding, as well as specific opportunities for parks to be built in the San Juan/Dana Point area.

Beyond providing multiple health and mental benefits, Spohn has found that launching skateparks engages kids who are more alternative or counter-culture, or don’t want to participate in organized team sports. His skateparks in Fontana and Palm Springs have also exponentially reduced gang activity and crime in the surrounding areas, he said.

Based on San Juan’s population of 35,852 people, Spohn estimates that there are about 725 skateboarders in town. To serve those skaters, Spohn said a park of about 13,000 to 14,000 square feet would be the minimum space recommended. However, if neighboring communities like Dana Point, Laguna Niguel and San Clemente are taken into consideration, that number rises to about 52,000 square feet.

Spohn visited multiple locations around town, and while he hasn’t looked too far into any single option, he noticed potential for parks in spots like San Juan’s Sierra Park, a strip of land along Camino Capistrano and the undeveloped area between San Juan Creek and La Novia Avenue. While those sites lack amenities, he said they provide good visibility and accessibility—two important components of a successful skatepark.

He also presented potential renderings of a waterfront skatepark in Dana Point, which could include elements like a bowl, streetscape features, sculptures and lighting.

Smiling faces swept across the council chambers during the presentation. Teens whispered rapidly back and forth, and parents explained what was going on to their young ones. Spohn took note of the large youth presence and said it’s up to the Youth Advisory Board and other teens in town to start reaching out to city officials. By forming a collaborative skatepark committee, Spohn said park advocates can get a conversation rolling between San Juan and Dana Point.

Elsanadi agreed that a skatepark subcommittee meeting on a weekly basis would “really get things going.”

Brian Phillips, organizer of the “Skatepark of Dana Point” group, said he feels “the possibility of a joint venture between Dana and San Juan is a very realistic option.”

“Especially if it could be somewhere close to the border, like Marco Forster or Del Obispo schools,” Phillips said. “I think the Dana Point Youth Board would be ecstatic to get an email from you guys.”

“I love the idea of a skatepark in our community,” Taylor said. “I think it’s something that we’ve wanted for a long time … I really applaud you for taking this on.”

Councilwoman-elect Kerry Ferguson also addressed the board. Ferguson previously told The Dispatch it’s important for kids and teens to have recreational opportunities that don’t require being on a team. Ferguson said she would dedicate whatever resources necessary to help the youth board during her time on the council.

Spohn said it’s not too difficult for a grassroots movement such as the Dana Point/San Juan skatepark to qualify for state or federal grants. Eric Groos, director of Great Opportunities, a charitable nonprofit that works with kids in the San Juan area, also said he’s aware of a company willing to donate cement for the project.

The skatepark movement in Dana Point gained momentum back in March when supporters of the community organization Skatepark of Dana Point spoke at a council meeting. At the July 1 meeting, the council directed staff to prepare a feasibility report analyzing the prospect of building a skatepark in town.

Beyond the nuts and bolts of the project, several people in attendance were impressed with the tone of Monday night’s discourse.

Dana point resident Patricia Perrone was happy to take her four kids—who enjoy skateboarding and go to San Juan schools—to the meeting. Perrone said in the past, she’s heard too many negative associations with skateboarding.

“It’s very frustrating to me, because my kids are very respectful,” Perrone said. “I’m excited to see you guys involved in this, and I would be happy to be part of a committee in the joint venture hopefully between the two cities. I would just like to see more movement away from the negative stereotypes of skateboarding.”

Perrone’s 8-year-old daughter Taryn also decided to address the board.

“I go to school to Del Obispo, and there’s no skateparks around for everybody to go to,” Taryn said. “So I want to build a skatepark around here so they don’t have to drive all the way out to somewhere.”

“Every skatepark is probably a few miles away, so I can’t skate to it,” Aidan said. “The closest skatepark I think is either Lags or San Clemente. If there was a closer one, me and my friends could probably skate to it, and we wouldn’t have our parents drive us super far.”

The issue is now in the Youth Advisory Board’s court. Members were encouraged by those in attendance to reach out to both Dana Point and San Juan officials in order to finally get the skatepark conversation rolling.