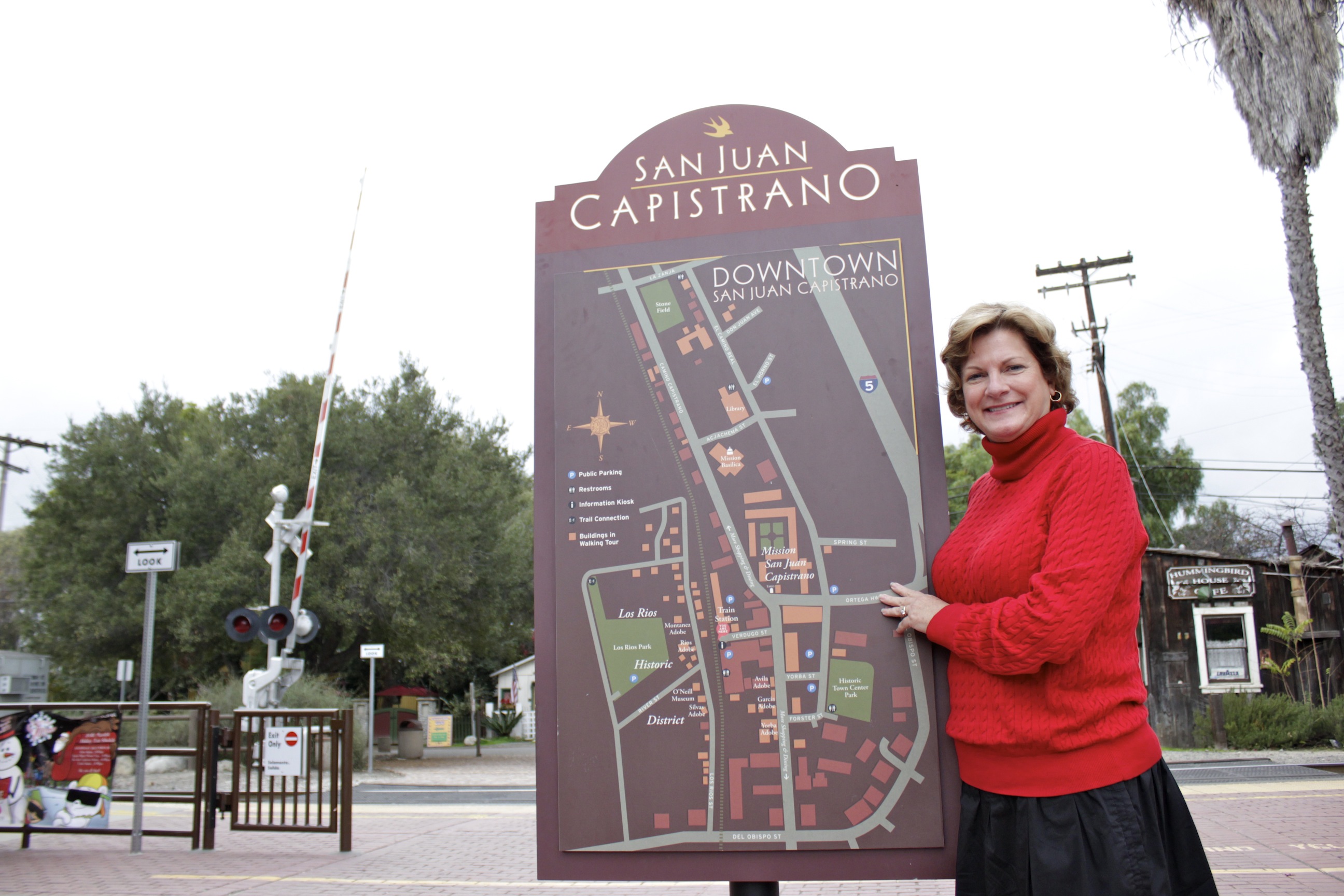 Reflecting Back on 4 Years Served

Back in December 2008, on the night she was sworn into the San Juan Capistrano City Council, Laura Freese said, “Tonight is the first step in a long journey.”

In reality, Freese’s path to the council dais started long before her decision to run for office. As a council member, Freese often waved the flag for the city’s business community—a flag she first picked up as a local small business owner and member of several business-focused groups, including the Chamber of Commerce.

Fast forward to 2012, as Freese exits City Hall with only one full term to her name—many expected her to be a fixture on the council, and many still believe she will eventually make a return. To that, Freese says, “Never say never,” and of course, her replacement, former mayor and new Councilman Roy Byrnes, successfully accomplished that feat in the November election.

Still, when asked to reflect back on her four years’ work on the council, she does so with a marked degree of satisfaction. More could have been done, she says, but in her lone term, Freese helped usher in several changes that have altered San Juan Capistrano’s course into an upward swing.

“Four years later, we were able to get a lot of webs untangled,” Freese said. “I’m not a policy setter who sits back and lets things happen on their own time. I’m a roll-up-your-sleeves type of policy setter.”

Most of the accomplishments Freese recalled have to do with local business. She is especially proud to have seen the completion of the Residence Inn by Marriott—San Juan Capistrano’s first new hotel in 30 years.

With the dissolution of the redevelopment agency, Freese said she’s also glad that the city moved funds so quickly toward reopening the Regency Theatre and opening new car dealerships.

“We in the public sector expect things to move fast, but government moves very slowly,” Freese said. “Across the street from the Mission, it was very different when I moved here in 1978. A lot of the changes came out because of redevelopment money … The Franciscan Plaza, the movie theater, Mission Promenade, parking—it’s all new.”

In April, the City Council also adopted the Downtown Master Plan, which aims to create a more pedestrian-friendly downtown.

“Back in the 1980s, you weren’t even allowed to eat outside in San Juan Capistrano. No outdoor gardens or patio restaurants,” Freese said. “The short-term plan was to widen the sidewalk across from the Mission and to create a more pedestrian-friendly downtown with walkable streets, flowers, lights and furniture.”

Freese is quick to point that that plans to revitalize downtown began under previous councils but was accelerated in recent years. With the Mission’s Gatehouse Preservation Project still in process, Freese says future councils face a difficult challenge in further improving downtown while maintaining the city’s historical character.

“Our local city councilmen of the past, present and of the future really have a passion for the city and its betterment,” Freese said. “Our motto, ‘Preserving the Past to Enhance the Future,’ is a very tough thing to do, but it can be done with the right balance.”

“When I got here, I saw there was a master plan, but as I was talking to people, they said we’d gone through that before without getting much done,” said Mark Bodenhamer, CEO of the Chamber of Commerce. “Laura really carried the flag for the master plan and made sure it wasn’t just some thought exercise … From the chamber’s perspective, she’s an ideal member of the council.”

Even as she leaves the council dais, Freese says she will continue to help the city’s business community at-large, specifically as the chair of the Economic Preservation Subcommittee, which aims to curb the impact of Caltrans’ massive Interstate 5/Ortega Highway Interchange Project. Along with Mayor John Taylor and several representatives from local businesses, Freese and the committee are in constant contact with Caltrans and aggressively pursuing measures that will, at the very least, help preserve traffic to the city’s businesses and in turn, maintain revenue streams to the city.

In fact, Freese says her decision to run for council four years ago was inspired by early plans for the construction project.

“What really pushed me to run in 2008, rather than 2010, was knowing that it was going to come to a vote,” Freese said. “I talked to a lot of businesses and they were saying how business unfriendly San Juan was … I learned about the importance of having good businesses, so that made me want to help the city get through this project.”

One visible step the committee has taken is to place welcome banners along the chain-linked fences surrounding the former Chevron and Jack in the Box properties on Ortega Highway and Del Obispo Street. The committee is planning on additional beautification efforts in the area, which essentially serves as a gateway into downtown. Other plans include holding more public activities and events in downtown, specifically in Historic Town Center Park, and offering lower fees and streamlining the permit process for event producers.

“She’s not leaving any stone unturned. Everything you can possibly think of, we’re throwing at the Orange County Transportation Authority and Caltrans to try and preserve businesses during this construction project. She literally thinks of everything,” Taylor said.

Taylor said he fully believes Freese will run again for city council, and he’d be surprised if she didn’t win. He, along with many in the community, was surprised Freese chose not to seek re-election, but given her reasoning—her husband Steve’s cancer diagnosis earlier this year—Taylor said the choice was clear.

“She absolutely made the right decision,” Taylor said.

Freese reports that after six months of chemotherapy, five months of radiation and surgery, her husband’s cancer is now in remission.

At her last council meeting on Tuesday, December 4, Freese, joined by her husband, was met with a standing ovation from a capacity audience in the council chamber.

In his farewell address to Freese, Councilman Larry Kramer, then still the mayor, read off a long list of all of the outside agencies and regional boards Freese served on. It was enough to draw muted laughs from the audience, not born of comedy but awe.

Kramer closed by saying he fully expected Freese to continue serving the city in some capacity. Later, in her last few moments on the dais, Freese smiled and winked—a trademark sign of hers according to Taylor—before vacating her seat.

“Probably the best ending to it all, I’m leaving the best city in better shape now.”