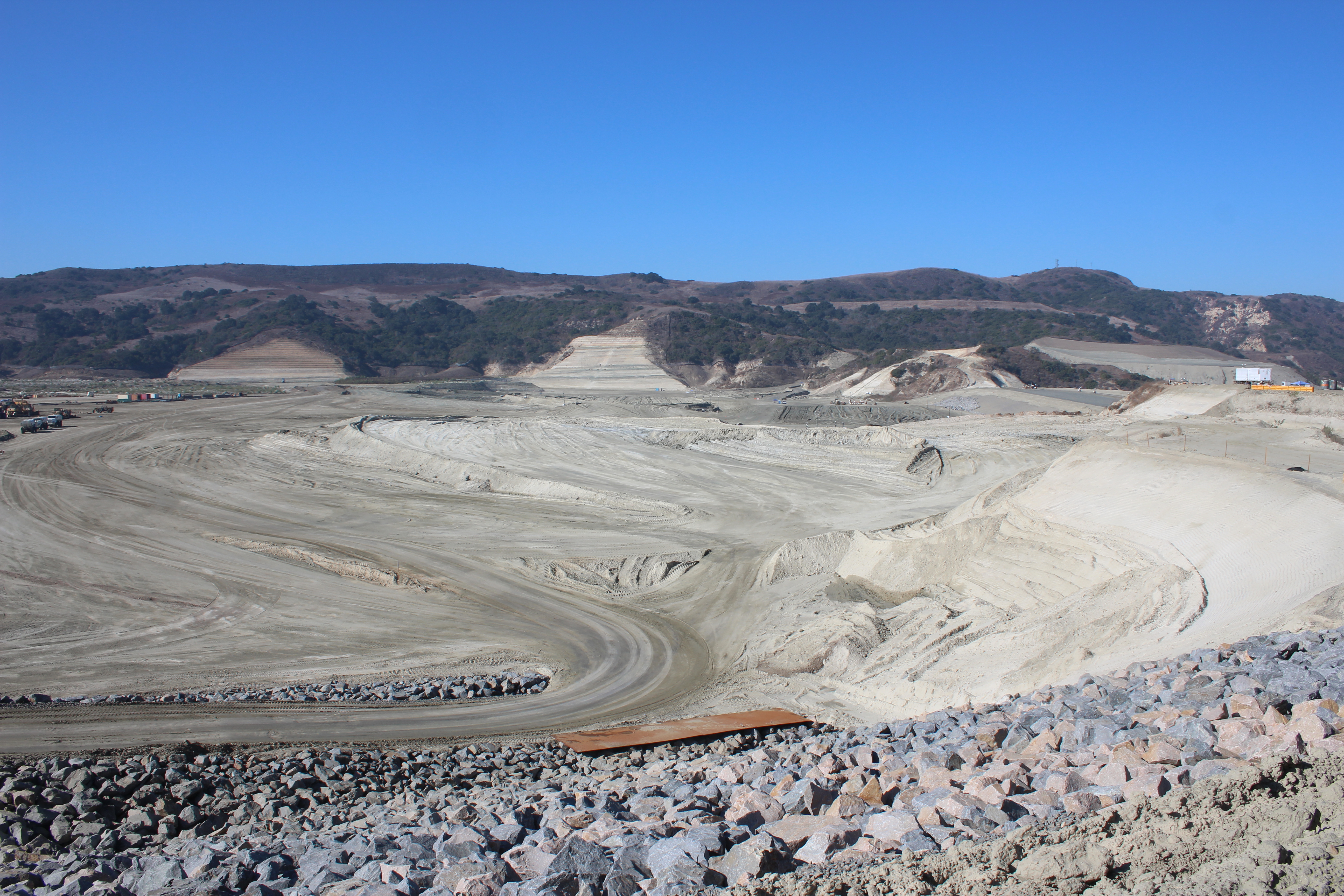 A reservoir and water dam project aiming to store recycled water is on track, according to water management officials.

The Santa Margarita Water District gave a tour of the Trampas Canyon Reservoir and Dam on Saturday, Nov. 16. Construction began in January 2018 and is expected to finish by 2020.

The dam and reservoir are south of Ortega Highway on land acquired from Rancho Mission Viejo. The reservoir is intended to hold 1.6 billion gallons of recycled water. The City of San Juan Capistrano is actively engaged in a process to transfer the city’s water and sewer utility systems to the SMWD.  An annexation agreement with SMWD is anticipated to be brought to the San Juan Capistrano City Council in early 2020, with the actual annexation planned for spring 2020.

“This reservoir will allow us to store that water and utilize it in the summer, when right now we’re short recycled water and as development increases,” said Don Bunts, deputy general manager for the SMWD. “If we get severed from Northern California and the Colorado River, we will have drinking water available for all the customers.”

In the winter, when recycled water is produced, it normally goes out to the ocean, because there is no way to store it. The reservoir was originally built in the early 1970s for sand mining. “Because this dam was here, we started working with the ranch to determine where could we put this seasonal storage reservoir, because we knew we needed one,” Bunts said. “We were weighing the pros and cons of utilizing this site.”

The site south of Ortega Highway was more attractive than other options since it had already been used, meaning the SMWD doesn’t have to build on an unused, pristine, all-natural site.

Trip attendees were driven to different areas of the dam and reservoir, had to wear hard hats and safety vests, and were provided water by the SMWD. People took pictures of themselves at the site throughout the trip. The buses took off from the SMWD building on Antonio Parkway in Rancho Santa Margarita, one of the areas the SMWD serves.

The 177-acre site south of Ortega Highway looks like a desert scene you’d see in a movie. The elevation is steep. Measurement statistics include being 3,000 feet long from the east dam to the west side of the reservoir, the face of the dam being 216 feet high, and the reservoir being able to fill the Rose Bowl nearly 20 times.

Currently, there are no plans for recreational use of the Trampas Canyon Dam and Reservoir, SMWD Public Information Manager Nicole Stanfield said during a question-and-answer session, before the buses took attendees to the different spots.

The reservoir won’t be continually filled like a lake, but instead have water levels that go up and down as needed, with officials comparing it to a bathtub. It will be the biggest surface water reservoir in South Orange County once finished.

The project is intended to increase the amount of recycled water the SMWD uses, with the goal to have 100 % recycling with wastewater.

“That way, we’re using every drop more than once, hopefully more than twice,” Bunts said. “It is so expensive and precious to bring in, so we’re trying to utilize that multiple times.”

Most of the water “will come from the Chiquita wastewater treatment plant, which is about seven miles from here,” Jeff McDonnell, engineering construction manager, said during a question-and-answer session at the dam. “That is all the treated wastewater that goes through that plant and will be delivered to this location and stored at this location.”

The soil material comes from a borrow site nearby. There are also about a “million cubic yards of sand and gravel” imported. A perimeter security fence will be around the entire site to keep animals and the general public out.

“All during construction, when we’re doing the excavation in the borrow pit areas, we have a paleontologist on site to make sure we’re not finding any fossils or things of that sort,” Bunts said. “We have biologists on site so that we’re not having any kind of impacts beyond what we’re allowed to and beyond what the environmental impact report allows us to touch.”

Rocks have been put up at the site to protect against permanent erosion.

Ventura County resident Lori Constan attended the tour, because she was curious about the project and is concerned about water availability. She brought along her young nephew, so he could see the site and be mindful of water usage.

“It’s a valuable resource, and it’s going to be an issue. It is an issue,” Constan said. “It’s impressive, everything I’ve read so far about how Orange County is managing these plants and their water issue. It’s really forward thinking.”

Constan is a fan of the Trampas Canyon Reservoir and Dam, particularly since it focuses on recycled water.

“That is brilliant. We don’t necessarily need to be transporting water from other states just so we can water our lawns and plants, and potentially drink,” Constan said. “I think I’m more of a proponent of a reservoir as opposed to desalination. I’m still needing to learn more about both, but I think I’m leaning more towards this way.”