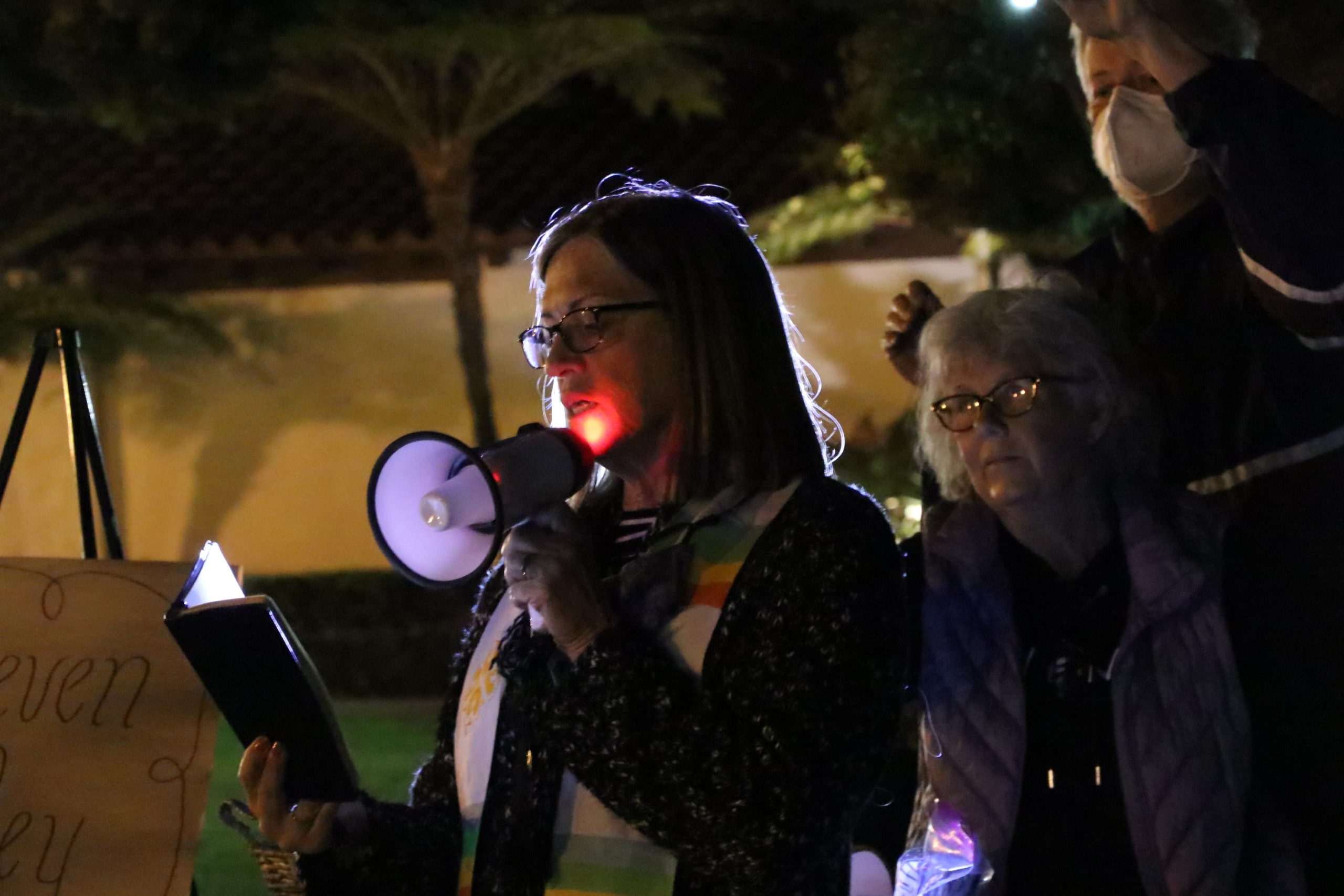 It was Sunday, Jan. 24, when Margie Riley Lofgren phoned the South County nursing facility where her brother, Steven Richard Riley, had been staying to continue his physical therapy. She was hoping to check in on Riley, who was just days into his stay there while recovering from a pelvic fracture he had sustained a few weeks before.

After being unable to connect with him those first few days at the center, the news that he had left against medical advice came as a shock to Lofgren, as Riley, at 73 years old, was homeless and reportedly suffered from dementia—a diagnosis that was supposed to be noted in his medical records.

To help find Riley, Lofgren, who grew up in San Clemente and now lives in Oregon, contacted Cathy Domenichini of iHope, a faith-based nonprofit assisting the homeless.

Domenichini had been actively working with Riley since November to get him into housing, and had been assisting him through his medical endeavors. After driving around a bit to locate him, she found him outside of San Clemente’s senior center, his usual stomping grounds.

“I did find him and spoke with him,” she said, later adding: “It was going to be really cold that Sunday. It was freezing the day I was there talking to him. I had some jackets and blankets in my car … this other guy, who’s also homeless that was there, he took care of him.”

Speaking to his condition, Domenichini noted that while Riley had the wherewithal and knowledge to hitch a bus ride back to San Clemente, “he didn’t realize how long he had been gone.”

For about three weeks, Riley had been at Mission Hospital in Laguna Beach recovering from his fracture, which he had sustained in a fall on Jan. 1, when he was staying in a motel room. He was later transferred to the facility for ongoing physical therapy.

“I said, ‘No, Steve, you’ve been gone for three weeks,’ ” she recalled of their conversation that Sunday. “In all that time, I was calling him at the hospital, bringing books to him. We were in contact continually with the social workers and the doctors.”

Two days later, Domenichini met with Riley again to check in on him, and another acquaintance of hers also spoke with him the following day. However, by Thursday morning, Jan. 28, when she had planned to see him again, she got word that he had been found dead outside of the senior center.

Riley, whose cause of death is still pending according to the Orange County Sheriff’s Department, is among a total of 40 homeless individuals in the county who died during the month of January.

That figure comes a month after the county coroner’s office reported 2020 as the deadliest year for Orange County’s homeless population, with 330 deaths, a rise from more than 200 the year before.

According to data from the coroner’s office, two of the deaths this past year occurred in Dana Point, while five homeless deaths were reported in San Clemente. There were no deaths recorded in San Juan Capistrano in 2020.

On Tuesday night, Feb. 16, a handful of people and homeless advocates including Domenichini gathered for a vigil to honor Riley outside of the San Clemente Community Center, where city councilmembers were initially conducting their regular meeting.

Donna Vidrine, who has staunchly supported efforts to get a local homeless shelter built, called on the city officials to immediately act to get some sort of housing and shelter established for the city’s homeless.

Among the options she proposed included using vacant hotel rooms as a temporary shelter space, converting local hotels into permanent housing for homeless persons who are disabled, and allowing overnight sleeping at the Community Center.

A handful of residents also wrote in to Tuesday night’s council meeting, imploring the San Clemente officials to take action on getting a shelter constructed, with some calling Riley’s death a failure of the city.

In response to those comments, Councilmember Chris Duncan said he was heartbroken over Riley’s death, while noting that two items on the council’s agenda that night—consideration of the Joint Homeless Subcommittee’s annual work plan and the creation of a full-time homeless outreach worker—“would hopefully move us forward.”

“I think in honor of Steven Riley, we certainly should focus on those things and see if we can move the city forward and, hopefully, finally address the homelessness issue in town,” he said. “We’re better than that, and I’m confident we will.”

Touching on the need for a local shelter, Domenichini said one idea the city should consider is opening a cold-weather shelter during the winter months, potentially partnering with local churches to do so.

“It just needs to be run properly,” she said, adding: “It doesn’t have to be a big deal to do it, just providing people with a warm place to sleep and restrooms.”

The seven total homeless deaths within the three South County cities last year marked an increase from 2018, when there were five total deaths among the neighboring towns, and from 2019, when there were six deaths.

While Dana Point and San Juan Capistrano have not seen an increase since 2018, San Clemente’s homeless deaths have increased in the span of the past three years.

According to the data, Dana Point has seen two homeless deaths each year since 2018, while San Juan Capistrano saw two deaths in 2018, one in 2019 and none in 2020. Causes of death vary from substance overdoses, a cliff fall, natural causes and various health failures.

“One of the deceased individuals was housed at the time of their death. The other individual was housed, left housing, was offered housing again, and declined it,” said Kelly Reenders, assistant city manager for Dana Point. “Sadly, they passed away shortly thereafter.”

For San Clemente, a city of nearly 65,000 residents, which nearly doubles the population of Dana Point or San Juan Capistrano, some causes of deaths among the homeless population include overdose, gunshot wounds and drowning.

Among the five reported deaths in San Clemente last year was Kurt Reinhold, the 42-year-old Black man who was shot and killed by homeless outreach officers during a daytime altercation in which he was believed by OCSD to have reached for a deputy’s firearm.

Attorneys representing Reinhold’s wife and mother in a lawsuit against the county have argued in court documents that the father of two, who had been battling intermittent homelessness, didn’t intend to reach for the officer’s gun and that any contact was purely coincidental.

The shooting prompted the Orange County District Attorney’s office to investigate the death. That investigation is currently ongoing.

Upon reflection of these reports, OCSD Sgt. Dennis Breckner attributed the rise in deaths to the rise in homelessness.

“In 2020, there were three (overdoses), one specifically mentioning fentanyl use,” Breckner said. “As to why this may have occurred … the simple answer is because of the rise in homeless persons, coupled with the increase in drug use and the increased presence of fentanyl on our streets.”

Breckner added that law enforcement has cautioned members of the public about the rise in fentanyl cases and the extreme danger that the drug poses.

“Our Homeless Outreach Team proactively contacts members of the public who might be experiencing homelessness, and they make every effort to afford those members of society with whatever services might be available,” Breckner said.

Echoing Breckner’s statement, Domenichini had also said the increased deaths are tied to a rise in homelessness.

An approximate tally of the county’s homeless population that’s conducted biennially on every odd-numbered year couldn’t be done this year because of the pandemic.

Reenders said that Dana Point has continued in-person street outreach, with personal protective equipment (PPE) and social distancing, stressing the importance of keeping the continuity of services for homeless during the pandemic.

“The PIT (Point-in-Time Count) is an important countywide effort; however, given that Dana Point has a full-time outreach program, it’s not what we rely on,” Reenders said. “In Dana Point, we meet on a weekly basis for case management of homeless.”

Previous sheltered and unsheltered Point-in-Time Counts have shown an increase in homelessness. The apparent rise, according to Domenichini, is largely a result of the ongoing health crisis.

“Yeah, I think it’s because of the pandemic. People aren’t working, not able to pick up casual work, so the people on the fringes (who could previously rent hotel rooms) are not even able to do that,” she explained. “It’s a rough environment living on the street. It’s tough, it’s stressful.”

The latest unemployment data the state released for the month of December had put Orange County’s jobless rate at 7.4%, up from the 6.4% that had been recorded in November.

Asked what she hopes city officials, local stakeholders and other advocacy groups take away from Riley’s death, Domenichini said, “We need to have a center for people to go and a shelter where they can get out of the cold.”

Another aspect that advocacy groups should consider moving forward is the type of services they’re offering to the homeless, noting that oftentimes they can be all surface fixes and fail to build meaningful relationships and trust with the clients they’re looking to help.

“They need to be relationship-based and comprehensive and have an end goal. Whereas, we cannot be content with simply stopping and seeing an individual, talking with them a bit, and giving them a bag of toiletry items,” she said. “You have to dig deeper and figure out how, what that person wants and how we can get them to a more stable life.”