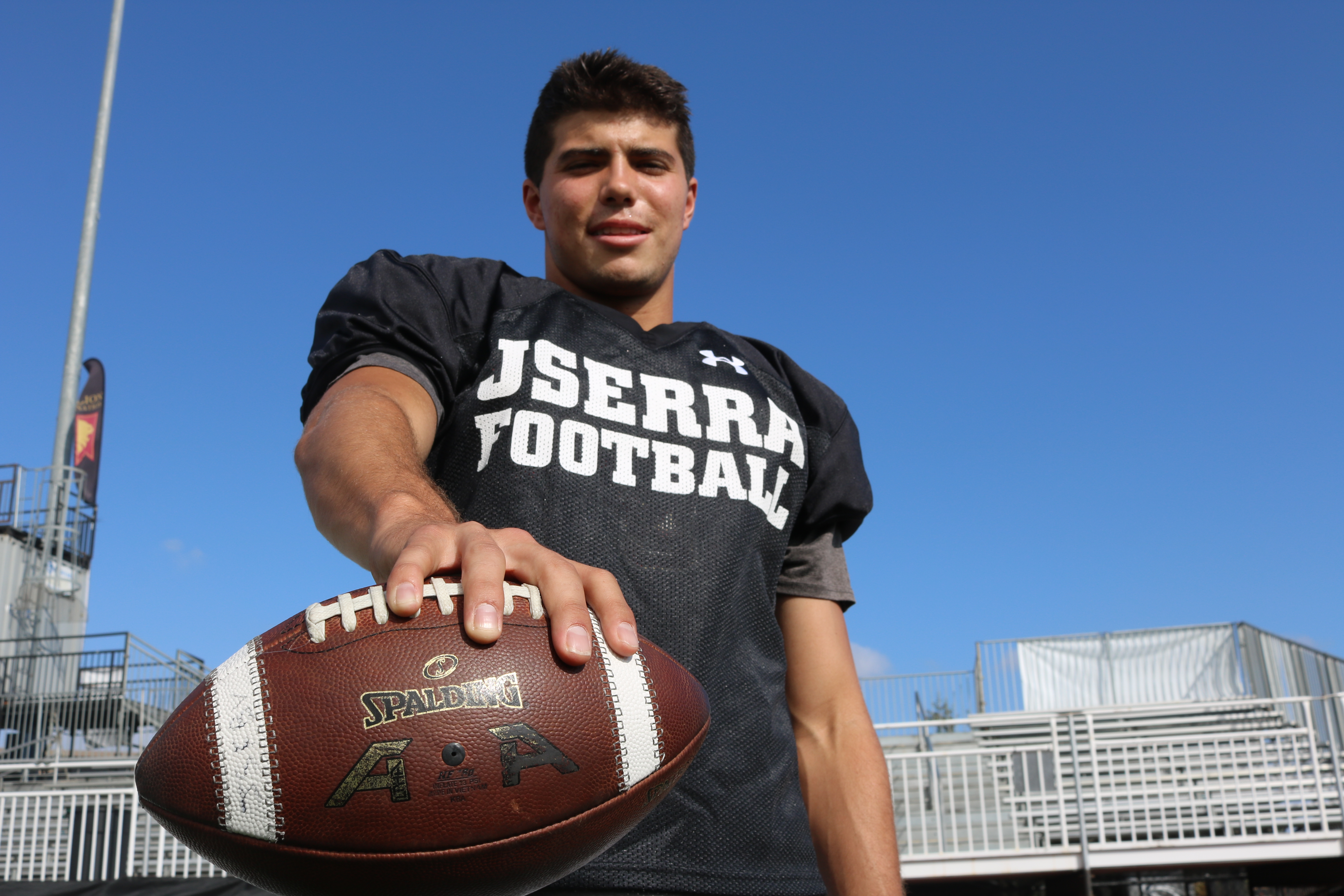 With the ball at Vista Murrieta’s 25-yard line, his team up by nine in the third quarter, JSerra quarterback Matt Robinson saw receiver Munir McClain had single coverage against him on the outside.

He took the snap and scurried some 15 yards backwards as the Broncos blitzed. He glanced to the left, drawing the lone Vista Murrieta safety over, narrowly avoided a sack, rolled right and threw a deep ball off one foot from what was now the 43.

The long ball found McClain inside the five-yard line and he was pushed out at the two. The pass set up a rushing touchdown on the next series and JSerra went on to win.

It was a highlight reel play, for sure. But it was also a testament to Robinson’s newfound skill in patiently waiting for things to unfold in front of him.

In years past, Robinson was known as a solid passer that could extend drives with his legs. He threw for just over 2,000 yards and 20 touchdowns as a junior, but was also the team’s second-leading rusher, averaging 41.7 yards per game on the ground. He is very swift on his feet and has the ability to make opponents miss.

With no defender in sight, the Robinson of 2016 might have taken that third-quarter ball against Vista Murrieta and ran it all the way for a touchdown. That’s what his coach, Pat Harlow, wanted him to do.

Regardless, the first-year coach was happy with the result.

“I wish he would have ran that one in,” Harlow said with a smile. “But he’s truly become a pocket quarterback. When he’s felt pressure he’s been able to step up and do the right thing with the ball. He’s improved in that area tremendously.”

When Harlow took over the program in the offseason he wanted Robinson to be more committed to staying in the pocket. The idea being it would play to everyone’s strengths.

The Lions have a large and physical offensive line. There are playmakers at nearly every skill position and they have a quarterback with a canon for an arm and three years of experience starting in the Trinity League under his belt.

The combination has produced a high-powered offense that has not been seen at JSerra in quite some time, maybe ever.

The undefeated Lions (4-0), ranked 13th in the state according to www.calhisports.com, are averaging 44.5 points per game. They scored 45 against Corona del Mar in the season opener, dropped 48 on Alemany the next week and scored a season-high 59 points in a win over Bishop Amat.

Robinson, a Montana commit, and his arm have been the catalyst.

By staying put and not running at the first sign of trouble, Robinson is throwing more often, more accurately and has improved on every statistical passing category from his junior season. He has thrown for 1,119 yards and is averaging 279.7 yards per game, the fifth-highest mark in Orange County. He is completing 56 percent of his passes and has thrown 10 touchdowns to three interceptions.

Harlow wants Robinson’s completion percentage to improve but said the mark he has now is a byproduct of the Lions taking multiple shots downfield every game.

He has carried the ball just four times for 41 yards in four games.

“I think our offensive line has been better this year so I have more time and there’s not as much pressure coming through,” Robinson, who has been sacked just three times this season, said. “I can just stay in there and make all the throws.”

Robinson admits he misses scrambling for first downs and making spin moves in the open field but knows he has that ability in his back pocket at the ready. There’s no doubt he will have to improvise multiple times this year with six tough matchups remaining on the schedule.

Robinson has been dishing out passes to talented receivers like Tyler Shimomura, Tarik Luckett and Munir McClain. All three receivers are averaging at least 67 yards receiving per game and McClain leads the group with five touchdown catches. The Lions’ strong running attack, led by senior Al Fisher, adds another dimension.

“We have a lot more playmakers this year … I have more experience and I know more coverages,” Robinson said. “We’re all on the same page and we’ve got a good balance between the run and the pass.”

Robinson said the team’s first quarter against Bishop Amat on Sept. 8 was a display of just how good the offense can be. The Lions scored 24 unanswered points and he threw two touchdown passes in the first 12 minutes against a historically strong program. JSerra would eventually win in a shootout, 59-35, and Robinson threw for a season-high 295 yards and five touchdowns.

The JSerra offense will be tested repeatedly as the schedule creeps into October. A matchup against Los Alamitos (2-1) awaits JSerra on Friday, Sept. 22. The Griffins have allowed just 34 points in three games.

JSerra opens Trinity League play at Cerritos College against Servite on Friday, Oct. 6. Games against powerhouses Mater Dei (ranked No. 1 in California) and St. John Bosco (No. 2) are on the horizon.

Robinson and the Lions will be patiently waiting for them.