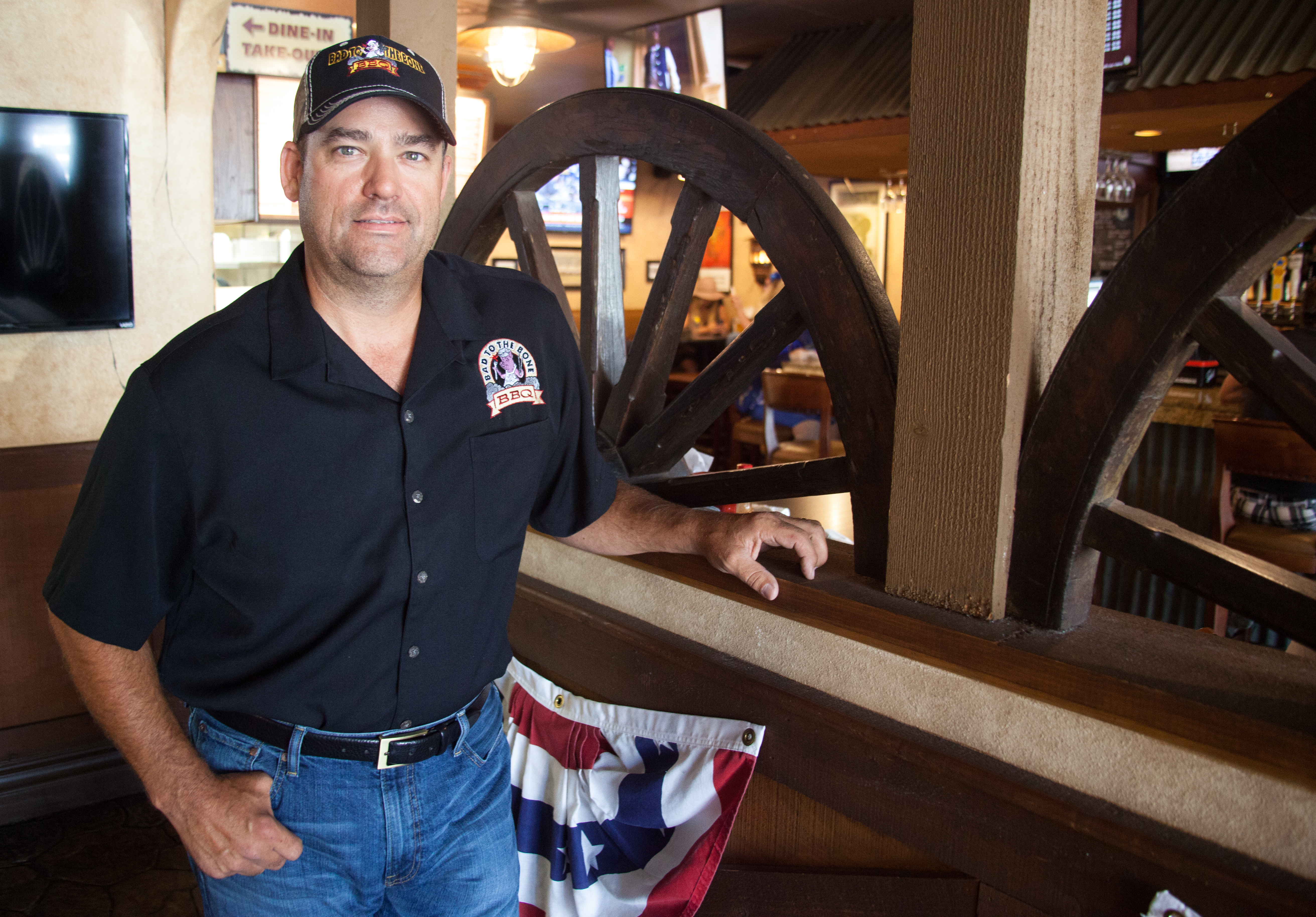 From Rodeo Roping to Restauranteur

If you’ve been to Bad to the Bone BBQ in San Juan Capistrano, it shouldn’t come as a surprise that owner Marty Wells comes from a rodeo background. Known for its authentic wood-smoked BBQ, Bad to the Bone’s décor envelopes diners in a rustic, Western atmosphere, complete with a wall of old rodeo photographs—some of Wells, others of his friends and rodeo icons.

Raised on a ranch in Sulphur, Oklahoma, Wells grew up around horses, cattle, and of course, rodeo. His father, Jerry Wells, was a legendary American Quarter Horse Association trainer and breeder who traveled the globe and won over 60 world titles during his career.

Wells said after a few years in college, he knew he wanted to do rodeo professionally. For about six years, he traveled across the country as a member of the Professional Rodeo Cowboys Association, competing coast to coast in tie-down roping events.

Formerly known as calf roping, tie-down roping is based on the age-old practice of ranchers gathering cattle to doctor them. Wells said roping was always something he dreamed of doing professionally.

The PRCA roper moved to California in 1999, where his wife, Mary, hails from. Mary trained horses in San Juan, and so they moved to town. Two years later, Wells found himself competing in the first ever Rancho Mission Viejo Rodeo.

Wells said it was fun to be able to participate in his hometown rodeo, a rodeo that would go on to become one of the biggest and richest in the country.

“The passion they have to give back to the cowboys is something you just don’t see,” Wells said of the Ranch.

Wells and his wife are co-owners of Bad to the Bone, which started out as a 30-seat sandwich shop in 2005.

“There wasn’t much real barbecue that I could see in South Orange County when I moved here,” Wells said. “So I had a passion to bring the type of cuisine that I grew up on to Southern California, and put an Orange County spin on it to make it work.”

The couple can now fit 100 guests in their restaurant and serve up high quality meat that’s been smoked overnight in hickory wood pits.

“Authentic BBQ is smoked with wood rather than oven baked, and then finished over the grill with sauce,” Wells said. “When you see the deep red smoke ring on the outside edge of the meat, you know that’s real authentic BBQ.”

Wells said he and Mary feel blessed to live and work in such a tight-knit equestrian community. Each year they look forward to donating meals to the RMV Rodeo cowboys and their guests—about 200 people each day. Bad to the Bone also hosts an annual rodeo party, which this year falls on Saturday, Aug. 27. This event features the Rob Staley Band, as well as dancing, a full bar, and of course, some real cowboys.

“They like to come here to mingle,” Wells said, smiling. “I still know a handful of them who are still competing.”

Stop by Bad to the Bone rodeo weekend and who knows, you might just see a cowboy or two in the booth next to you.

Bad to the Bone BBQ is located at 31738 Rancho Viejo Road in San Juan Capistrano.