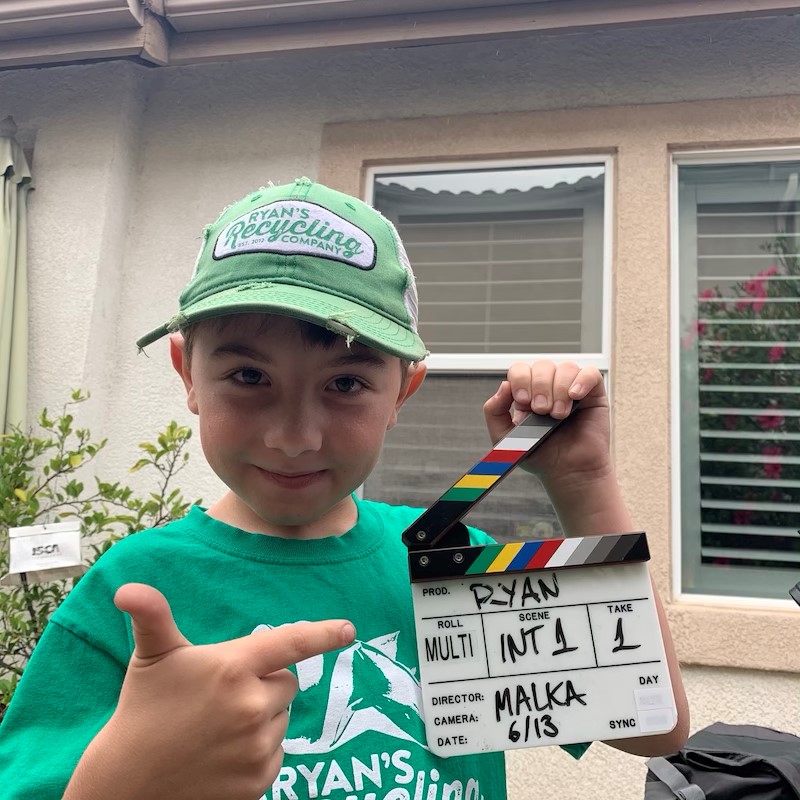 Ryan Hickman, a 9-year-old San Juan Capistrano resident, is proving that making a difference in the world can be done regardless of age.

Ryan, who started the company Ryan’s Recycling in 2012, was recently selected to sit on the Kids Board of Directors for the clothing subscription company KIDBOX, which caters to children ranging from babies to teens.

Since the launch of Ryan’s Recycling, the company has collected more than 500,000 bottles and cans and recycled 96,000 pounds of recyclables. Ryan’s efforts caught the eye of KIDBOX board alumni, who nominated him to sit on the board.

At the end of July, Ryan will head to the clothing company’s headquarters in New York City, where he’ll learn more about what goes on behind-the-scenes at KIDBOX.

“The social purpose of KIDBOX was to provide clothes to one million children, but it grew into so much more,” said Brandi Temple, chief community officer for KIDBOX. The KIDBOX team has a strong focus on kindness, believing that children are the future, which is how the Kids Board of Directors came to be.

The company was founded in 2015 by Haim Dabah in an effort to help children in need. Through KIDBOX, parents can pick out and order a box of clothes that match their kid’s style. The parent and child can decide whether to keep and pay for certain clothes, sending some back, or keep the whole box.

If they decide to keep the box, parents and their children can select a charity to donate to through KIDBOX. Each season, a new round of charities are available for donation through the website.

This will be the third year of the Kids Board of Directors, as each year 12 new children between the ages of 8 and 14 are selected to join. They’re found through social media, local communities, board alumni nominations and applications on the KIDBOX website.

Like Ryan, the board members have similarly started their own companies, nonprofits and fundraisers, or are passionate advocates for various social issues to which they’ve devoted their childhood.

The children on the board collaborate and help one another with their passions, but they are also each given the spotlight. Each month, KIDBOX brings attention to one child and their philanthropic work to help raise awareness to the social issue they’re tackling.

“The goal is to amplify what they’re doing and have others add onto it,” Temple said.

Each child will be tasked with coming up with their own projects and ideas related to their humanitarian efforts within their local communities.

Ryan’s passion for recycling started at the young age of 3 when he accompanied his father to a local recycling plant, and it sparked a lifelong mission to help animals and the environment.

In addition to his own recycling collection service, Ryan has donated approximately $10,000 to Pacific Marine Mammal Center through his company, as well as with the help of others who have donated in his name.

“It’s a good way to give back, and I love helping the animals,” Ryan said.

Not only does Ryan love giving back to organizations he finds important to his cause, he also takes to the beaches to clean along the coast and visits customers in Orange County to collect their recyclables.

Across Orange County, Ryan’s Recycling has approximately 200 customers who schedule pickups from Ryan. Whether it be from a home or an office, he will be there to help make a difference any way he can.

Like a recycling rock star, Ryan has toured across America with different organizations to help raise awareness about the importance of recycling and provides some education on how to properly recycle.

“If a kid like me can do it, anyone can do it,” Ryan said about the act of recycling. “If you already recycle, keep up the good work. If not, start recycling.”

Ryan has partnered with two different organizations to help bring education and recycling to cities all over the country. Ryan became a spokesperson for the nonprofit Recycle Across America (RAA) and endorses its standardized recycling labels that help take the fuss and confusion out of recycling. RAA’s standardized labels have been implemented across school districts in Florida, resulting in a 90% increase in recycling.

Valet Living is another organization Ryan has partnered with to host cleanups and help encourage more sustainable living.

In the practice of sustainability, there’s a saying: “Reduce, Reuse, Recycle.” According to the United States Environmental Protection Agency (EPA), reduce and reuse are the most effective ways to save natural resources.

Reducing and reusing items help eliminate the energy and raw resources that would be needed to create something new again, as well as help cut down on greenhouse gas emissions that contribute to global climate change.

Collecting and processing materials that would otherwise be thrown away is known as recycling. Recycling helps reduce the amount of waste that sits in landfills, conserves natural resources and helps save energy. All three efforts are meant to help sustain the environment for future generations and move the world in the right direction.

Within the last three years, Ryan has been recognized with an array of awards, including San Juan Capistrano’s “Citizen of the Year,” Orange County Register’s 100 Most Influential People and Aquarium of the Pacific Young Hero Award, to name a few.

Wherever Ryan goes, his passion follows, as he will also be volunteering at Cherry Kids, a local nonprofit after-school and summer program institution.

To learn more about Ryan’s Recycling or to schedule a pickup, visit RyansRecycling.com.

To learn more about KIDBOX, their boxes and charities, visit KIDBOX.com.