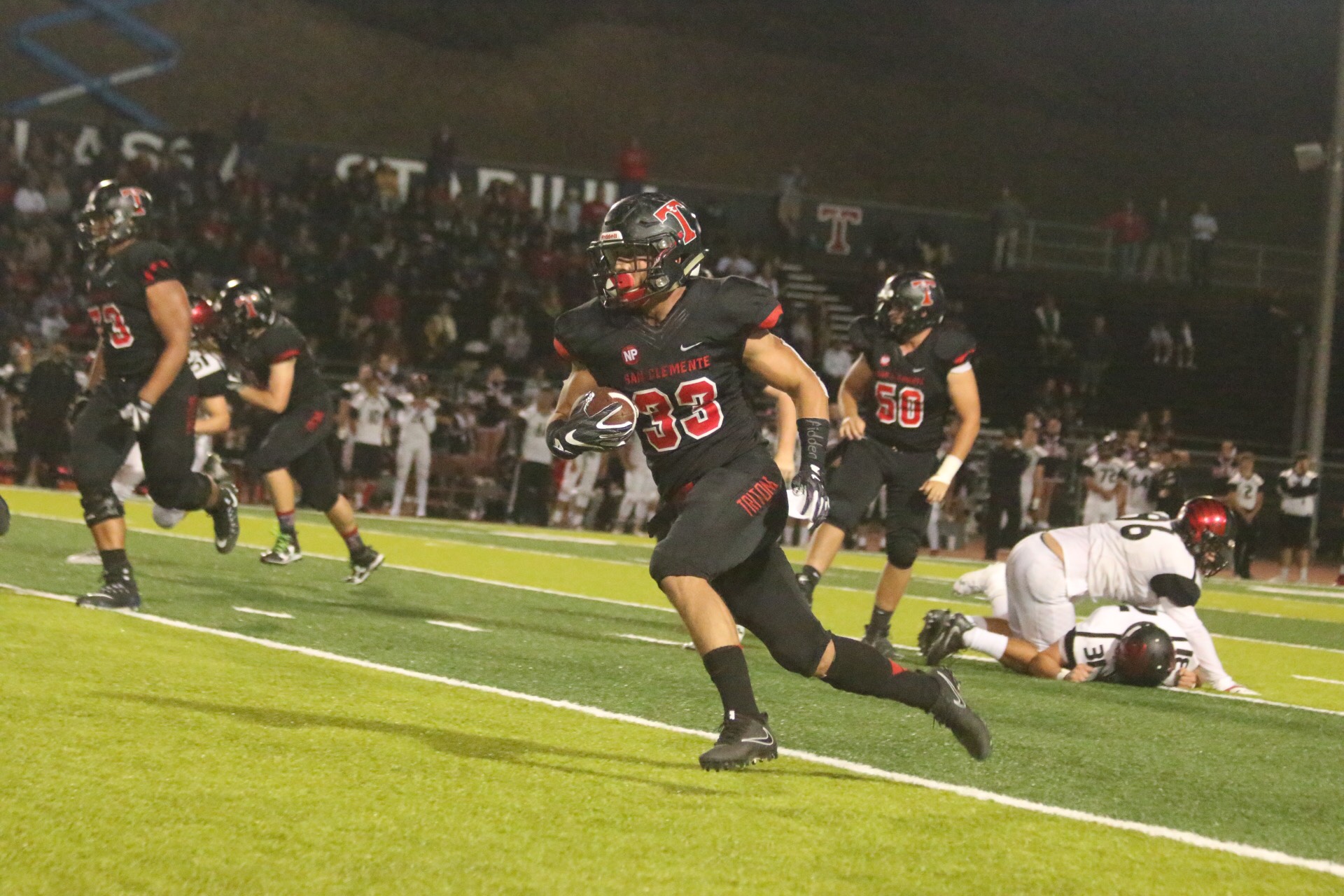 It didn’t take long for San Clemente to establish a running attack playing on the road against San Juan Hills Friday night.

Senior running back Austin Whitsett took the ball through a host of Stallion defenders for a blistering 73-yard touchdown run on just the third play from scrimmage and the Tritons were off to the races.

San Clemente continued to pile up yards running the ball, scoring all of their touchdowns on the ground in a 31-13 South Coast League victory.

Led by Whitsett, who ran for a season-high 172 yards and two touchdowns, San Clemente’s backs ran for a combined 326 yards. Quarterback Brendan Costello rushed for 65 yards and a touchdown and Sean Turcotte added 85 yards and a score.

The ground attack allowed San Clemente (8-0, 2-0 league) to control the clock and string together efficient drives.

After the Tritons defense forced a quick Stallion (5-4, 1-2) three-and-out to start the second quarter, San Juan Hills did not get to touch the ball again until the second half. San Clemente strung together a massive 22-play drive that ate up nearly 10 minutes and 30 seconds off the clock. The Tritons were a perfect 4 for 4 on third-down conversions and converted a fourth down on the drive. Whitsett carried the ball and converted in all five of the scenarios. San Clemente drove down inside the Stallions’ five-yard line, but San Juan Hills made a stand and forced Tristan Trager to kick a 21-yard field goal. Trager’s kick gave San Clemente a 10-6 lead at the half.

“We knew coming in we needed to run the ball. It’s all pretty much our offensive line,” Whitsett said. “I think that was our best job collectively that we’ve had in the run game this season.”

San Clemente’s defense helped keep the Stallions off the field as well. Raymond Ferrell intercepted a pass three minutes into the third quarter, setting up another lengthy San Clemente drive that ended with a three-yard Costello touchdown run.

Whitsett’s second score, a 33-yard burst up the middle, came at the start of the fourth quarter and made it 24-6.

Turcotte, who came on to replace Whitsett with the game out of reach, exploded for a 66-yard touchdown run minutes later. Turcotte shed several tackles on his way to the end zone.

“We talked all week about how it was going to be a physical football game and i thought Sean Turcotte, Austin Whitsett and even Brendan Costello did a great job running the football,” San Clemente coach Jaime Ortiz said. “If you want to be a championship team you have to be able to run the football. It was very reminiscent of our 2011 team where we were just able to control the line of scrimmage.”

Matt Barrows caught a 16-yard touchdown pass from Rodriguez to make it 31-13 with four minutes remaining.

San Clemente will play its homecoming game next week against Trabuco Hills. San Juan Hills will travel to play Tesoro.