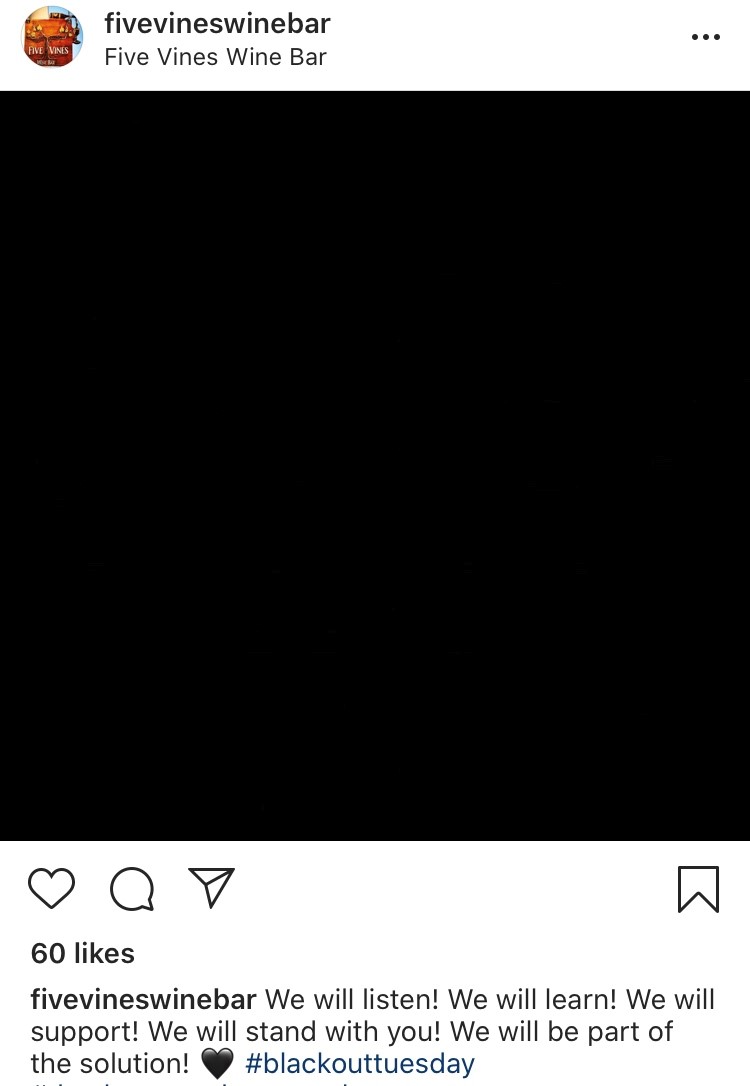 Numerous San Juan Capistrano businesses and organizations made #blackouttuesday posts on social media on Tuesday, June 2, amid national protests over the death of George Floyd.

Accounts on Instagram and other social media platforms have posted blank pictures as a means of solidarity and awareness surrounding the death of Floyd in Minneapolis after former officer Derek Chauvin forcibly kneeled on his neck while Floyd was subdued on the ground. Chauvin has been charged with third-degree murder and second-degree manslaughter.

“We will listen! We will learn!” a caption on the Five Vines post said. “We will support! We will stand with you! We will be part of the solution!”

In further comments to The Capistrano Dispatch, Suzy Fairchild—one of the owners for Five Vines—said they understand that they do not completely understand, but they “will do much better because no one should stand alone!” Fairchild said Five Vines lost a few social media followers since the post, but that doesn’t bother her when she stands for things she believes in.

Discussions have taken place across the country lately on white privilege, racial disparity and the extent to which white people should be involved in matters of racial injustice and are aware of ongoing racism and police brutality.

“I have lived a life of privilege as a white male that grew up in rural England and so do not want to pretend that I can comprehend the intensity of hurt that the black community is feeling today. It is, however, very much a part of my belief system that all humans should be treated as equals, and it’s clear that this is very much not the case in America today,” Mayfield owner and operator George Barker wrote in a statement to The Capistrano Dispatch. “As a business that will likely have a significant number of people of color in our team, I want to make sure we establish ourselves as a business that listens and is part of the solution, not the problem. It is no longer acceptable to just not be a racist. Ensuring we move forward and establish systems for change and hold others and ourselves accountable on behalf of a guiding light that ‘all lives  are equal’ is what we promise to do.”

Mayfield is planning to open in late June or early July in downtown San Juan Capistrano, but it is also monitoring ongoing conditions during the COVID-19 pandemic with regard to an opening date.

The #blackouttuesday posts have come under criticism from some people who say the posts block out crucial information from black organizers and organizations, since posts with the #blacklivesmatter hashtag might hinder digital organization and fail to provide relevant information for the movement. Some supporters urge people to use the #blackouttuesday hashtag instead of #blacklivesmatter.

Protests have broken out in numerous areas, including San Clemente. The San Clemente demonstration was peaceful with no reports of arrests, injuries, or property damage, though tensions escalated at various points when counterprotesters argued with protesters. Orange County Sheriff’s Department (OCSD) officers were at the protest to monitor the situation. They formed a line between protesters and counterprotesters when arguments erupted between the two groups.

In statements posted to social media, OCSD San Clemente Police Services thanked protesters who civilly expressed their views, and said they have heard from the community and appreciate their support.

Other peaceful demonstrations have been held across America and the world, though some have descended into chaos with attacks, looting and violence. Various groups have been blamed for the violence, including Antifa and white supremacists.

An initial autopsy report on Floyd’s death by the Hennepin County Medical Examiner’s office said there were “no physical findings that support a diagnosis of traumatic asphyxia or strangulation” before a later report from the office said Floyd died of “cardiopulmonary arrest complicating law enforcement subdual, restraint and neck compression.” An independent autopsy report commissioned by Floyd’s family said Floyd was asphyxiated by Chauvin.