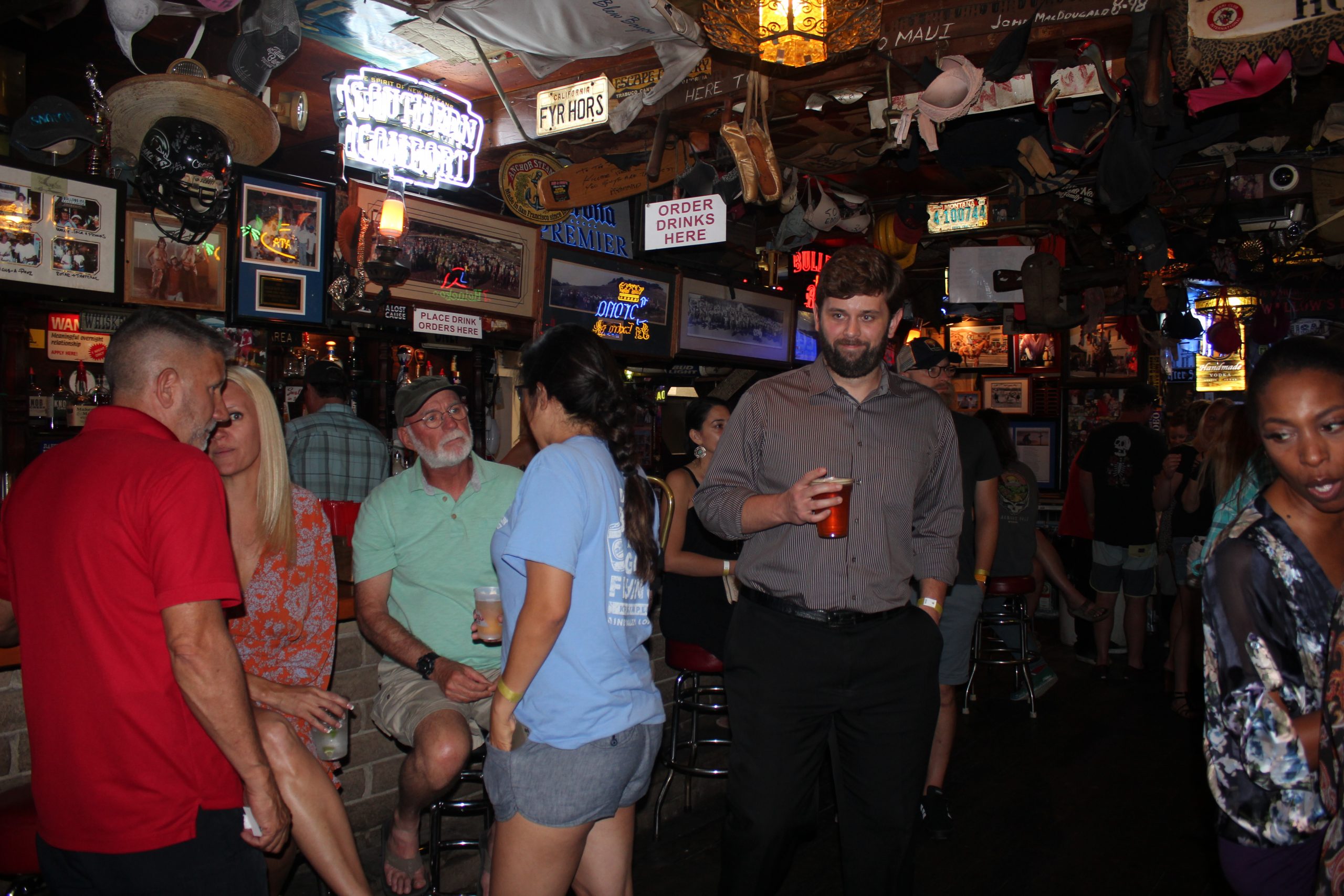 In a sign that life is getting back to normal in San Juan Capistrano, Tuesday night was filled with live music and dancing inside Swallow’s Inn.

The interior of the popular bar reopened on June 15 after most pandemic restrictions, including capacity limits and mask requirements for fully vaccinated individuals, were lifted in California. People drank, smiled, and mingled—just as they did before March 2020, when COVID-19 first put a halt to daily routines.

“We reopened at 8 o’clock in the morning with about 25 people waiting to get in, and it’s been pretty steady ever since,” manager Cal Grimes said. “It’s been 14 months, almost to the day, in the making.”

Swallow’s Inn has been partially open with its outdoor back lot throughout the pandemic. To be able to serve drinks outside in accordance with state health guidelines, Swallow’s also had to serve hot dogs, since regulations up until now had prohibited indoor bar service while allowing outdoor bar service with food.

“We have upwards of sometimes 850 people on a night,” Grimes said. “On Memorial Day, we had over 1,000 people come through on one day—but there’s nothing like being back inside. It’s a little bit of normalcy back in our lives.”

Grimes said he is thankful for the support, and practically everyone there to celebrate the full reopening has supported the bar throughout the health crisis. Masks, hand sanitizer, and ample outdoor space are available at Swallow’s, said Grimes, who did not want the full reopening to be interpreted as the business “snubbing their nose” at the Centers for Disease Control and Prevention.

“I’ve done everything by the book,” Grimes said.

Most other people walking throughout downtown San Juan Capistrano on Tuesday afternoon and night also did not wear masks and seemed to be in good spirits, though reactions were perhaps a bit more muted than expected.

A handful of people hung out at Five Vines Wine Bar, but the winery was not crowded Tuesday night. Suzy Fairchild, one of the owners, called the lifting of restrictions “weird,” since people have been required to wear masks for so long. Five Vines has lifted its mask requirements for customers.

Fairchild said Tuesday was “super slow” for Five Vines, but she expects business to pick up again going forward now that restrictions have been eased.

“We’ve been doing good with outside. Everyone wants to sit outside,” Fairchild said. “It’s very few people that want to go inside still.”

Five Vines expanded to an indoor patio during the pandemic, which offers a curbside view of the downtown area. Restaurants being able to expand outdoor dining—due to previous state-imposed capacity limits on indoor dining—was facilitated through a program offered by the City of San Juan Capistrano.

“If it wasn’t for this, we never would have made it,” Fairchild said.

Next door at Mayfield Restaurant & Marketplace—which opened in August and has followed restrictions since then—owner and operator George Barker said his reaction to the economic reopening is “general excitement” since they will finally be able to operate like usual but “also trepidation” when it comes to staffing and handling expected business.

Mayfield is adding bar seats to start but not any more tables right now, since more staff is needed. Companies, including restaurants, have struggled recently to fill open job positions, which some business owners have attributed to unemployment benefits. Some economists and industry experts, however, contend other factors are at play, including health care and being able to make a livable wage.

“I don’t want to jeopardize our current customers by just trying to squeeze extra revenue,” Barker said. “I prefer to still do what we’re doing and add people, and add tables over time. We’ll start by adding the bar seats, and then we’ll add tables as we build up our team and train them.”