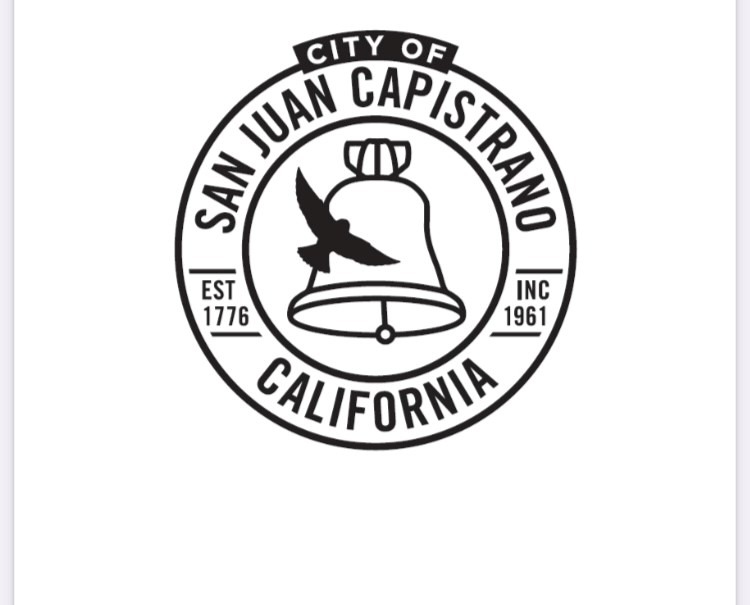 Featured photo: Courtesy of the City of San Juan Capistrano

Father Junipero Serra is associated with San Juan Capistrano and included in much of the town’s iconography—including the current city seal.

However, that will likely change by the middle of next year.

The City Council approved, by a 4-1 vote, to change the city seal during a meeting on Tuesday, Dec. 7—effectively removing Serra from the seal. Councilmembers Troy Bourne and Sergio Farias brought forth a proposed new design that has a bell (a symbol associated with Mission San Juan Capistrano, which has historic bells) and a swallow bird.

Though Bourne initially proposed waiting for 12 months before a new seal is implemented, the time frame was later shortened to six months. Suggestions and feedback will be solicited from the city’s Cultural Heritage Commission. If no changes come forth, the bell and swallow seal will be the new look by default.

“Seals do get updated from time to time, including some of the ones we famously use around our country. The U.S. Presidential Seal was updated so many times between 1850 and World War II,” Bourne said. “There’s probably a couple of reasons we can update ours … 52 percent, I think, last year of web traffic is online, meaning it’s on a phone or mobile device rather than someone going to their computer and accessing something. That seal you see on the wall right there at 3-foot-scale is depicted at a scale smaller than a dime right now on an iPhone.”

While the complexity of the current seal may look great in an art studio or on a wall, that does not translate when viewing it on a smartphone, Bourne said. The proposed new seal has a “simplified, easier-to-read font,” he said.

Serra’s legacy has been scrutinized in recent years due to his treatment of indigenous people while establishing missions throughout California, though that did not come up during the council’s discussion. The former Serra High School, a continuation school in San Juan Capistrano, recently reverted to its original name of Capistrano Union High under a decision made by the Capistrano Unified School District Board of Trustees, partially due to the recent scrutiny.

Bourne, Mayor Pro Tem Howard Hart, and Councilmembers Sergio Farias and John Taylor voted yes on eventually adopting a new seal. Mayor Derek Reeve voted no. Reeve said changing the seal has previously been discussed “offline” for years, and he was not aware of the request from Bourne and Farias until he got an email about it days before the meeting.

“It’s not necessarily a bad idea, but as far as not very bad ideas go, this is the absolutely worst idea imaginable,” Reeve said. “I think this is a terrible seal, but I get it. I’m not mad about it. I get what you’re trying to do. I just think it’s a bad idea.”

Reeve further alluded to potential legal issues that could arise from changing the seal, which he did not elaborate on while on the dais.

“I think my request is pretty reasonable to have this discussion regarding legal issues at the next council meeting,” Reeve said. “There’s three councilmembers that believe that, yes, we definitely have to do the seal. I want you to understand the consequences, and I think more thought needs to go into capturing the unique history and culture of the town that is not being captured in the seal that’s being proposed.”

The change has drawn backlash from some residents and community members, including Matt Gaffney, who sits on the city’s Planning Commission.

Mechelle Lawrence Adams, executive director for the Mission—where statues and other representations of Serra are displayed—also expressed her disapproval with the proposed change in an email sent to councilmembers and city staff before the meeting.

“While change is something that can be positive, the fact is that San Juan Capistrano is uniquely special and change should be stewarded always with an eye to the past,” Lawrence Adams said. “While a few people may be emotively responding to an image that dates to over a hundred years ago, it seems that there is a lack of appreciating what went into designing the original 1960s-era seal. Those same values and considerations should be taken into account as we go forward.”

Lawrence Adams further said she did not see any historic analysis in the agenda item, and the potential use of a bell with a swallow “is already plentiful and seen in a variety of already successful logos” for local organizations such as the San Juan Capistrano Fiesta Association and Historical Society.

“Our seal should aspire to have integrity and authenticity and should appear hand-crafted, not something taken from a clip artboard. It should inspire us to have lasting pride in this community,” Lawrence Adams said. “There is nothing wrong with having a logo that has a reference to the Mission San Juan Capistrano and to the indigenous people, and from that perspective is where I believe this process is best initiated.”