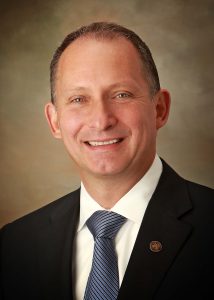 San Juan Capistrano Mayor Pro Tem Brian Maryott, who represents District 5 on the City Council, announced on Wednesday, Jan. 17, that he will run for U.S. Congress in the 49th District.

Maryott, who will run on as a Republican, becomes the ninth candidate thus far to declare their candidacy. The three other Republicans running are Rocky Chavez of Oceanside, Diane Harkey of Dana Point, and Joshua Schoonover of San Marcos.

The four Democrats who are running are Doug Applegate of San Clemente, Paul Kerr of San Diego, San Juan Capistrano’s Mike Levin and Sara Jacobs of Encinitas. Jordan Mills of Oceanside is running as a member of the Peace and Freedom Party.

“We often hear people say that Washington is broken,” Maryott stated in a press release, “but that is an exaggeration. The problem…is that so many high-profile legislators from both parties seem to have abandoned any willingness or interest in real collaboration. Not everyone in the corporate world sits down at a meeting with the same perspective on the critical issues—but my goodness, at least there is a decorum and mutual respect.”

Citing political experience, Maryott reiterated that he is a Republican, but that he worked for four years as the chief of staff in the 1980s for “a Democrat state legislator in Massachusetts.”

Unifying Congress under whoever is president is a critical theme Maryott said he will establish in his campaign.

“What I support is a strong national defense and a Congress that’s willing to stand behind our commander in chief,” Maryott told The Capistrano Dispatch on Thursday. “What our president needs is a Congress that understands his mission and stands behind him.”

Maryott was impassioned about strengthening defenses and protecting the United States against threats from countries like North Korea.

Additionally, Maryott said he would like to improve the conditions of social services across the board, as he said the failures of such institutions have hindered impoverished neighborhoods and contributed to crime in metropolitan and rural areas.

In his press release, he described the U.S.’s current approach to immigration as “chaotic and disingenuous” and that he was eager to address the issues, though no official stance on the immigration was provided in the release.

Since the announcement that Rep. Darrell Issa, who represented the 49th since 2001, is not planning to retain his seat, candidates have been bolstering their political teams in preparation for what is shaping up to be a competitive primary election. California’s top-two race system will filter out candidates on June 5.

Maryott was elected to San Juan’s City Council in 2016; therefore, if elected to Congress, he would have to vacate his Council seat with two years left on his term. He said he delayed his candidacy declaration because he wanted to gather feedback about it from the San Juan community that voted him into office.

“The one thing that would give me pause would be if the feedback was that my candidacy was too opportunistic or that I was abandoning the city,” Maryott said. “Today, it has been the opposite. (There has been) a lot of enthusiasm from the community to help our community in a meaningful way. The feedback and enthusiasm have been tremendous.”

Maryott said that if he “pulls off the upset of all upsets” and wins, he would nominate someone to fill his seat on City Council who has “put themselves forward to help the community.”

As Maryott campaigns, he said he intends to continue to fulfill his duties on Council “with no distractions.”

He stated in his press release that he self-funded his City Council campaign and will put personal funds into this campaign, but this time he will also seek donations.

Maryott recently retired as a senior vice president of Wells Fargo Advisors. In December, he was chosen by his fellow Council members to serve as mayor pro tem. Maryott is also San Juan’s representative on the Foothill/Eastern Transportation Corridor Agency board of directors.

On Life and Love after 50: Five Things I’ve Learned in Three Years of Retirement