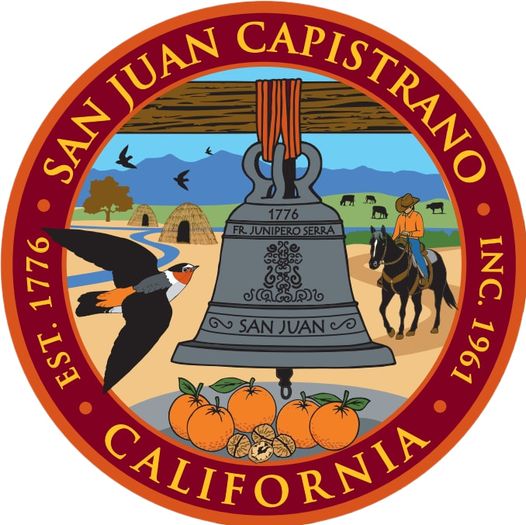 San Juan Capistrano officially has a new city seal design that still references Father Junipero Serra but does not feature the controversial figure as prominently.

The City Council selected the new seal designed by resident Kimberleigh Gavin on Tuesday, Sept. 6. Councilmembers and the Cultural Heritage Commission have considered various submitted designs throughout the year after Councilmembers Troy Bourne and Sergio Farias brought up instituting a new design in December 2021.

The new seal features a gray Mission San Juan Capistrano bell, swallow bird, horse rider, oranges and walnuts. It also depicts Kiicha huts that the town’s Indigenous people used to live in, hills, cows, and a blue sky. The seal notes that San Juan was established in 1776 and incorporated in 1961. The seal’s outer rim has a maroon color.

Serra is referenced by name on the bell but not depicted visually. His legacy in terms of interactions with Indigenous people when establishing the Mission system in California has come under scrutiny in recent times, though some residents have said he should be remembered for establishing San Juan.

The previous city seal featured Serra hugging a young Indigenous boy, which some residents—including Farias—found problematic, because they felt it reflected colonialist attitudes that European explorers had toward native people.

“I do think it’s important to keep (Serra) in the design in some manner,” said Gavin, who is also a local docent. “By putting his name on the bell, it’s a nice way to honor him.”

Gavin submitted several designs with slight differences in each for consideration. Numerous designs from other people were also submitted.

Councilmembers also required the new design depict aspects of both the Mission and Native Americans. The oranges and walnuts are intended to reflect San Juan’s agricultural history.

“We have such a layered history. This tells such a nice story of our city,” said Gavin. “We’ve had that existing city seal for so long, over 60 years, and it was good for its time. I think it looks really nice. … But I think it’s time to get more of the history involved in the city seal.”

“We had so many to look at, and we took the Cultural Heritage Commission’s lead and stuck with Ms. Gavin’s design and just worked with that,” Taylor said. “There’s so many directions. I could have chosen a dozen of these to really work with. I just wanted to thank people who submitted designs.”

“If it was up to me, I don’t think we’re there,” Farias said. “I think that we still have issues as far as this being printed on different media or being viewed through different media.”

When initially bringing up the issue in December, Bourne previously said the old seal design did not show up well on a smartphone.

“My recommendation would be that we instruct staff to work with various artists to come up with something that I think could last another 60 years,” Farias said. “I think that if we go in this direction, as soon as someone has enough votes, we’re going to have a new city seal.”

All the added design requirements by the City Council “didn’t help our cause,” Farias said.

Reeve said it was important to have the seal “tell a story” and reference Serra. Reeve has previously spoken in favor of Serra being remembered and depicted in San Juan.

“The seal that’s been recommended by the subcommittee fulfills those elements that I was looking for,” Reeve said. “We could do this for years. We’re never going to agree on all elements of a piece of artwork, and that’s why, when the subcommittee was founded, I pretty much was of the mind that it’s not going to be exactly the way I wanted.”

An alternate black-and-white design proposed by Bourne and Farias, which featured a swallow and Mission bell, would have become the new de facto seal if the City Council did not approve another design.

“I’m so happy we are now done with that,” Reeve said after the City Council’s vote.