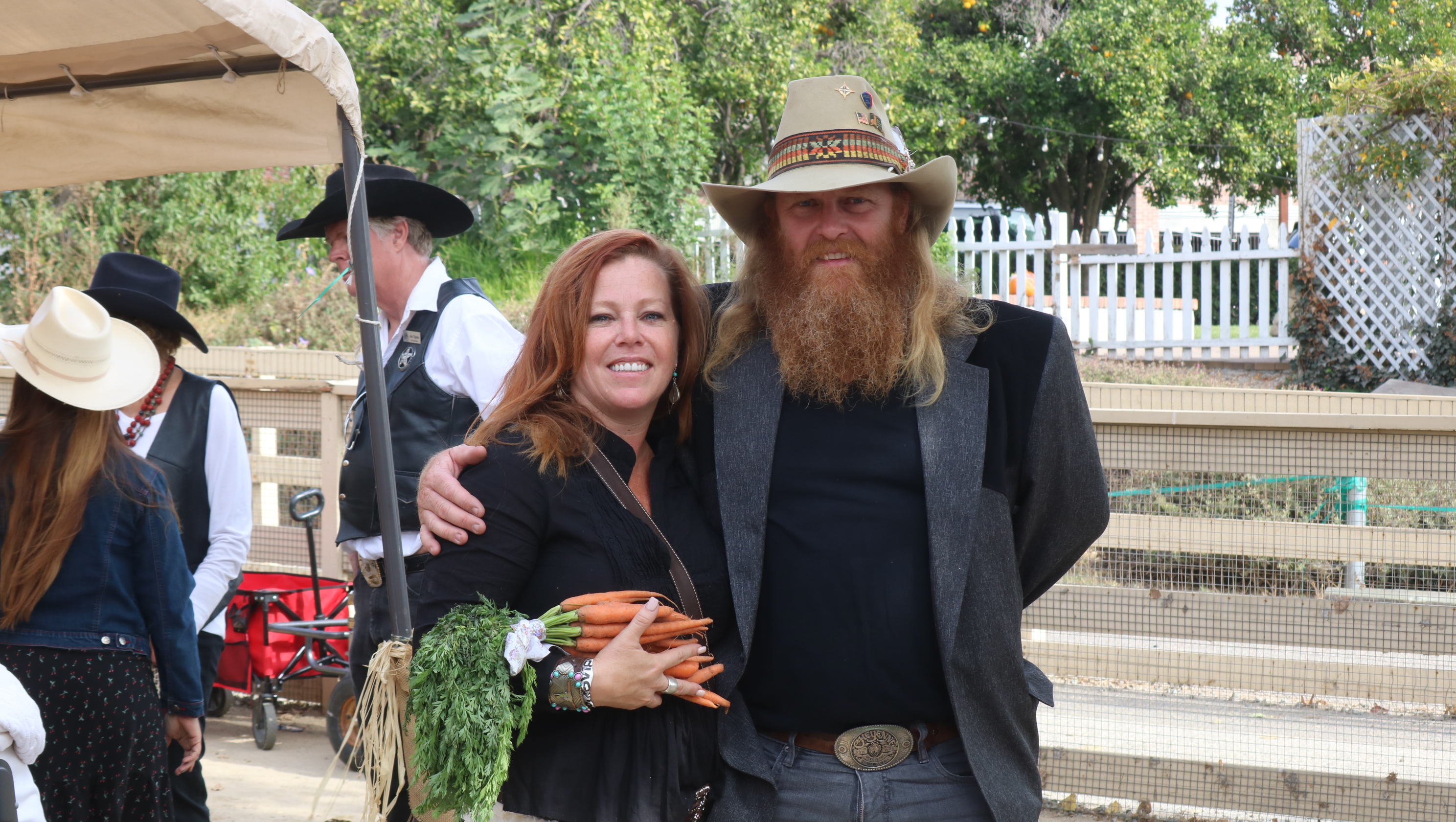 The Ms. Fiesta and Señor San Juan for the 2020 Fiesta de Las Golondrinas season have been chosen.

Marie and James Kelly, a married couple, assumed the titles during the Farewell to the Swallows Barbecue on Sunday, Oct. 27 at the ZOOMARS Petting Zoo. The Fiesta Association hosts the barbecue, organizes the annual Swallows Day Parade and votes on Ms. Fiesta and Señor San Juan every year.

Marie says she waited a long time for the distinction and is excited to be the new Ms. Fiesta. She has been a member of the association for five years and said it’s full of awesome volunteers.

“I hope to represent the town and community we have,” said Marie while hugging and taking pictures with other Fiesta Association members. “Everyone knows everyone.”

Marie and James Kelly have been locals in San Juan Capistrano for 10 years after moving from Dana Point; they have six children. James Kelly wore a cowboy hat with an American flag pin and fitting belt buckle.

Marie always looks forward to the farewell barbecue and likes seeing the community come out to celebrate the occasion. She complimented the music and said the annual migration and return of the swallows is a huge part of San Juan Capistrano history.

“Thank you to all the volunteers,” Marie said. “A lot of them are good quality people.”

Annabelle Isky and Tony Leone were the outgoing Ms. Fiesta and Señor San Juan. Isky was honored to be Ms. Fiesta and said the event is a fond farewell to the swallows, brings the area together and hopefully encourages new members to join the association. Isky proudly wore her Ms. Fiesta 2019 sash to the barbecue.

“It just keeps growing every year. We start planning for the new parade,” Isky said. “I’ve been involved with the Fiesta Association for 22 years. I’m not a secret in San Juan. I’m involved in the playhouse, the Chamber, a lot of different things.”

Leone joked it was an honor and privilege to cook so many hot dogs while Isky smiled and talked with friends. Fiesta Association member Gary Stewart—who cooks and handles other tasks for the group—said the barbecue had a full range of food and drinks.

“We use this as a close-out for the community to help us say goodbye, birds; it’s been nice you’ve been here,” Stewart said. “It’s a binder. You watch the people at the parade, and they’re excited to be able to come here. It’s a good identity marker.”

The present and past dignitaries, along with many other association members, were decked out in Western wear for the event. Cowboy hats, vests and frontier dresses were common sights. People gathered around at tables to chat, eat coleslaw and burgers and enjoy a few drinks, even while the weather was cooler than usual. Fiesta Association members distributed ballots to vote on the new dignitaries before the big announcement was made.

The Electric Tumbleweeds played twangy down-home music while attendees danced. The event drew people of all ages, from kids to adults. Richard Brown even celebrated his 87th birthday at the barbecue with his nephew, Scott Oaks, and Scott’s wife, Diane, by having his picture taken on the zoo grounds.

Parking spots were hard to come by as the afternoon rolled around, with so many people attending the barbecue and also enjoying other nearby fall events in and around downtown San Juan Capistrano.

The Swallows Day Parade to celebrate the swallows returning is generally held in March. The Fiesta Association is also planning the 2020 parade. “Follow the Swallows” has been chosen as the theme for the 2020 parade after being suggested by former San Juan Mayor Kerry Ferguson and former Ms. Fiesta Nina Leone. A recent theme focused on “How the West Was Really Won: Celebrating the Women of the West.”

The Fiesta Association said the Swallows Day Parade is one of the nation’s largest non-motorized parades.

The Fiesta Association also volunteers at other events, including recently with law enforcement.

Scott and Diana Schmitt, longtime residents who were presented the annual Man and Woman of the Year award as well as the Lifetime Achievement award in 2019 by the San Juan Capistrano Chamber of Commerce, will lead the 2020 parade. Steve Nordeck, Dan Haggerty and Audie Murphy have been past grand marshals. Those looking to join the Fiesta Association as new members can do so at swallowsparade.com.