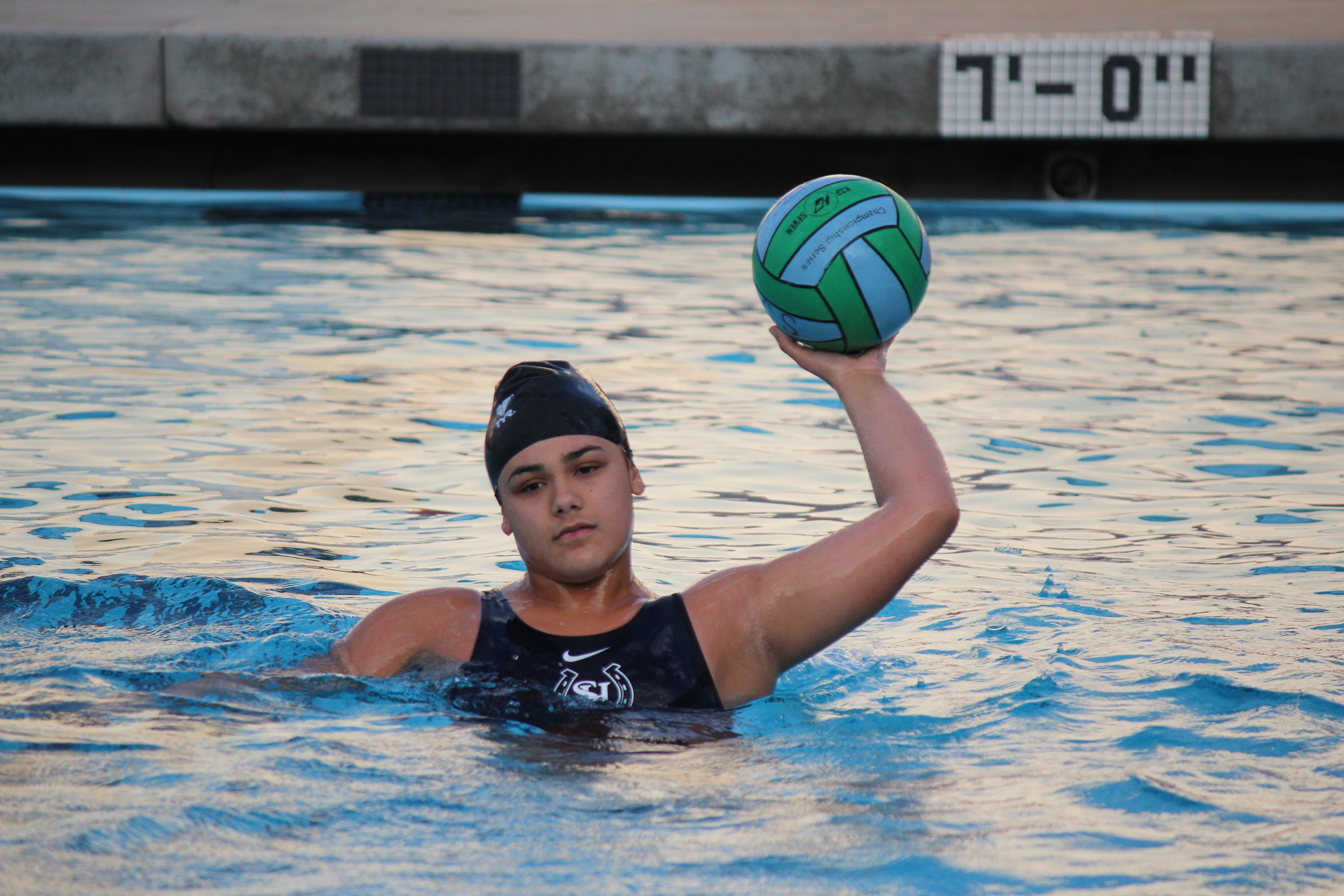 By Steve Breazeale and Michael Vogeler

This is the second part of our two-part series of local high school winter sports preview issues. This week, we feature the winter sports programs at JSerra Catholic and San Juan Hills.

Last Year: The Stallions went 7-22 overall and advanced to the first round of the CIF-SS Division 3AA Championships.

In order to stay relevant in the Sea View League, the San Juan Hills boys basketball team has been working on improving their defensive efforts as well as learning to play a mature, experienced brand of basketball over the offseason.

McFadden, who stands at 6 feet 7 inches tall, will be the focal point of the Stallions (4-4) offense. Head coach Kelly Hambrick says McFadden has been getting some notice on the Division 1 recruiting trail and has the ability to create plays, shoot 3-pointers and post up on offense.

Working down low will be Barnes, a 6-foot-4-inch post player. Hambrick says Barnes brings a physical toughness to the team and that he desires to be a consistent force in the paint.

Guiding the offense will be Luna, a junior point guard.

“I’m very happy with the team chemistry and the way we pull for each other … Coming off some tough records the last few years, that chemistry has been important,” Hambrick said.

The Stallions recently competed in the North OC Tournament, where they went 0-2, and will play in the Division 3 Extravaganza from January 3-4, with Sea View League play set to start on January 10. –Steve Breazeale

Last Year: San Juan Hills went 15-12 overall and finished third in the Sea View League. They advanced to the first round of the CIF-SS Division 3AA Championships.

The Stallions return all five of their starting players from last year’s CIF-SS playoff run and in the early part of the season, head coach Taryn Commins is already seeing a change in the team’s mindset.

Commins touched on the fact that last season, the team was young and talented, but struggled to grasp the concept of holding on to leads and finishing games. That comes with experience. Given the Stallions 6-2 start (as of December 19), Commins believes the team is starting to understand that veteran mindset.

The addition of Coleman, a Kansas native, has shifted the dynamic of the Stallions depth chart in a positive way. Coleman, who plays point guard, provides the team with offensive firepower that compliments Conklin’s game.

Allie Biedermann, Julia Lindsay and Katie Edwards are contributing with considerable minutes off the bench.

The Stallions will continue to play the man-to-man, half-court style of defense that brought them success last season.

The Stallions recently went 3-1 at the Ocean View Tournament and will play in the upcoming Max Preps Tournament at the end of the month, with an eye set on Sea View League play in mid-January. –SB

The Stallions are preparing themselves for Sea View League play by not shying away from tough opponents in the preseason.

So far in the early going, the Stallions (2-3-1) have played against Capistrano Valley, Century and Santa Margarita, which are all top-10 teams in their respective CIF-SS divisions. The three matches have all resulted in losses for the Stallions, but they played Capistrano Valley close in a 2-1 loss December 4.

The Stallions will be led by the trio of seniors in Sanchez (midfield), Torres (midfield) and Campos (goalie), who has one shutout on his resume in 2013.

“We are a very disciplined, attack-minded team … Our goal is to qualify for CIF and place in the top three in league,” head coach Peter Carey said.  –Michael Vogeler contributed to this report

Last Year: The Stallions finished second in the Sea View League, going 8-4-8 overall. The team advanced to the first round of the CIF-SS Division 1 Championships.

The Stallions took a big hit to graduation, losing 10 seniors who were a part of last year’s second-place league finish. The new, 2014 roster consists of three freshmen, nine sophomores and only three seniors.

Although they lost valuable experience, the Stallions will have a strong back line defense, according to head coach Farrel Moore. Gonzalez, a senior captain who is committed to Mercy College, will play center back and hold down a line that is made up of three sophomores and a freshman goalie.

“They may be young but the way they play together is great,” Moore said of the defense.

The Stallions offense is still a work in progress, but so far sophomores Shayna Larson, Madison Guerrero and Isabella Angotti-Jones have been platooning the front lines, searching for goals. Angotti-Jones scored twice in the Stallions 3-0 shutout of Woodbridge on December 17.

As of December 19, the Stallions were off to a 6-1 start to their season and will play against tough competition in the coming weeks, including matches against Dana Hills and JSerra, before heading into Sea View League play. –SB

The San Juan Hills girls water polo team will lean on the strength of two seniors and a returning crop of juniors throughout their 2014 campaign.

Anchoring the Stallions (0-4) defense will be Zax, a four-year starting goalie. Head coach Dan Newberry says Zax’s role in the net is crucial to the team’s success and the veteran has the ability to control the defense and set the tone.

On offense the Stallions rely on the play of Richardson, a second-team All-Sea View League returning senior. Richardson is a versatile scoring threat in the Stallions offense and Newberry has routinely positioned her at the two-meter spot as well as up top in the offense, facilitating and scoring when necessary.

“They’re learning to play together as a team finally and they get along really well. The communication level is getting better,” Newberry said.

The Stallions will play a constant, high pressure style on defense, which Newberry pegged as one of the team’s strengths and something he says should lead to more wins in 2014. –SB

The Lions may have lost their leader in August Touchard, who graduated and is playing at Grand Canyon University, but the JSerra girls basketball team still returns two key players who were part of last year’s deep CIF-SS and State Championship runs.

Miller, a junior guard, and House, a junior center, will lead a relatively young Lions (6-3) squad into the new season. Miller and House have already started wreaking havoc on opposing teams in the early going, especially in the Fullerton Tournament, where the Lions went 4-0 and Miller was named tournament MVP.

The Lions defeated both St. Bernard and Bishop Montgomery, two potential CIF-SS playoff teams, at the Redondo Union Battle of the Beach in early December.

Head coach Mary Rossignol said that with so many new faces, two freshman and one sophomore have been called up to join the nine-member roster, the Lions can have a different rotation on the floor every night. That wasn’t the case last season, where the Lions had a set starting five and defined role players who came off the bench.

Rossignol is hoping that an ever changing lineup, at least for now, will help the Lions depth in the long run.

The team is guard-heavy and will rely on the prowess of Miller and House, with a few veteran players like Reis and guard Corinne Bogle, for experience and skill.

“I think the mental toughness and experience we gained last year is going to pay off for us, especially in the long run,” Rossignol said.

The Lions will head to the Holiday Hardwood Invitational from December 26-January 4. They have a rematch with St. Bernard set for January 4. –SB

The Lions will look to use their effective counter attack to get wins in 2014. Leading the way on offense is Renezeder, who led the team in goals last season.

The Lions defense should be a strength this year, according to head coach Julie Ertel. Lowell, a senior goalie, will be in charge of communicating with and forming the back line defense.

The Lions will have a difficult hill to climb in the Trinity League, which features Mater Dei and Santa Margarita, but Ertel believes the team’s league game against Orange Lutheran on January 14 should be a competitive one.

The team is set to compete in the Falcon Tournament from January 6-11. – Michael Vogeler contributed to this report

Last Year: The Lions went 17-9 overall and placed third in the Trinity League. JSerra advanced to the quarterfinals of the CIF-SS Division 4AA Championships.

An influx of talented transfers mixed with veteran players has the JSerra boys basketball team primed for another CIF-SS playoff run.

Size will be the name of the game for the Lions (6-1), who added the 6-feet-11-inch Johnson, a Mater Dei transfer, to the roster in the offseason. Johnson will join a formidable frontcourt made up of Pallas (6 feet 8 inches) and Osetkowski (6 feet 9 inches).

McBride, an all-around guard that can create his own shot, and Vassar, a tenacious point guard with high-scoring capabilities, round out head coach Joedy Gardner’s projected starting five.

Last year, Vassar, Pallas and Osetkowski were all new transfers and had to go through the process of meshing with new teammates. Now, with a full year under their belts together, the Lions appear to have found a comfort zone.

“I think we all complement each other. This is the best team chemistry that I’ve ever been a part of,” Pallas said.

With all the focus sure to be on the big men, Gardner says the development of Vassar’s game will be crucial to their success. Vassar has always been a scoring guard but Gardner has seen his standout player sacrifice points for wins in the early going. Rather than go off on a shooting spree, Vassar has been responsible for instigating the offense, which starts with getting the ball in the hands of the frontcourt players.

The Lions have already competed in tough preseason tournaments, highlighted by a third-place effort at the Arizona Catholic Invitational. They will compete in the Maxpreps Holiday Classic from December 26-30. –SB

Last Year: The Lions advanced to the semifinals of the CIF-SS Division 1 Championships and finished second in the Trinity League.

Head coach Davor Fabulich said the high volume of games the Lions (5-2-1) have played already, as of December 19, will help the team come together after losing six starting seniors to graduation in the offseason.

Leading the way for the Lions will be the skill of their forwards, juniors Bustos and Julian Font. Fabulich says Bustos’ ability to finish and Font’s speed make them a threat to any defense.

The catalyst of the team will be junior center midfielder Canales, who Fabulich projects to play at the collegiate Division 1 level and possibly beyond.

Because the Lions have gone deep into both the Aliso Cup Tournament and their own, host tournament, the Lions have played more games than most teams in the early going, which can give them an experience edge as they gear up for the competitive Trinity League.

“We always play tough competition. And we’ve had a lot of games already that we’re going deep into, like four or five games. That’s going to help us play as a unit and it gives me a chance to look at what the team does under pressure,” Fabulich said. – SB