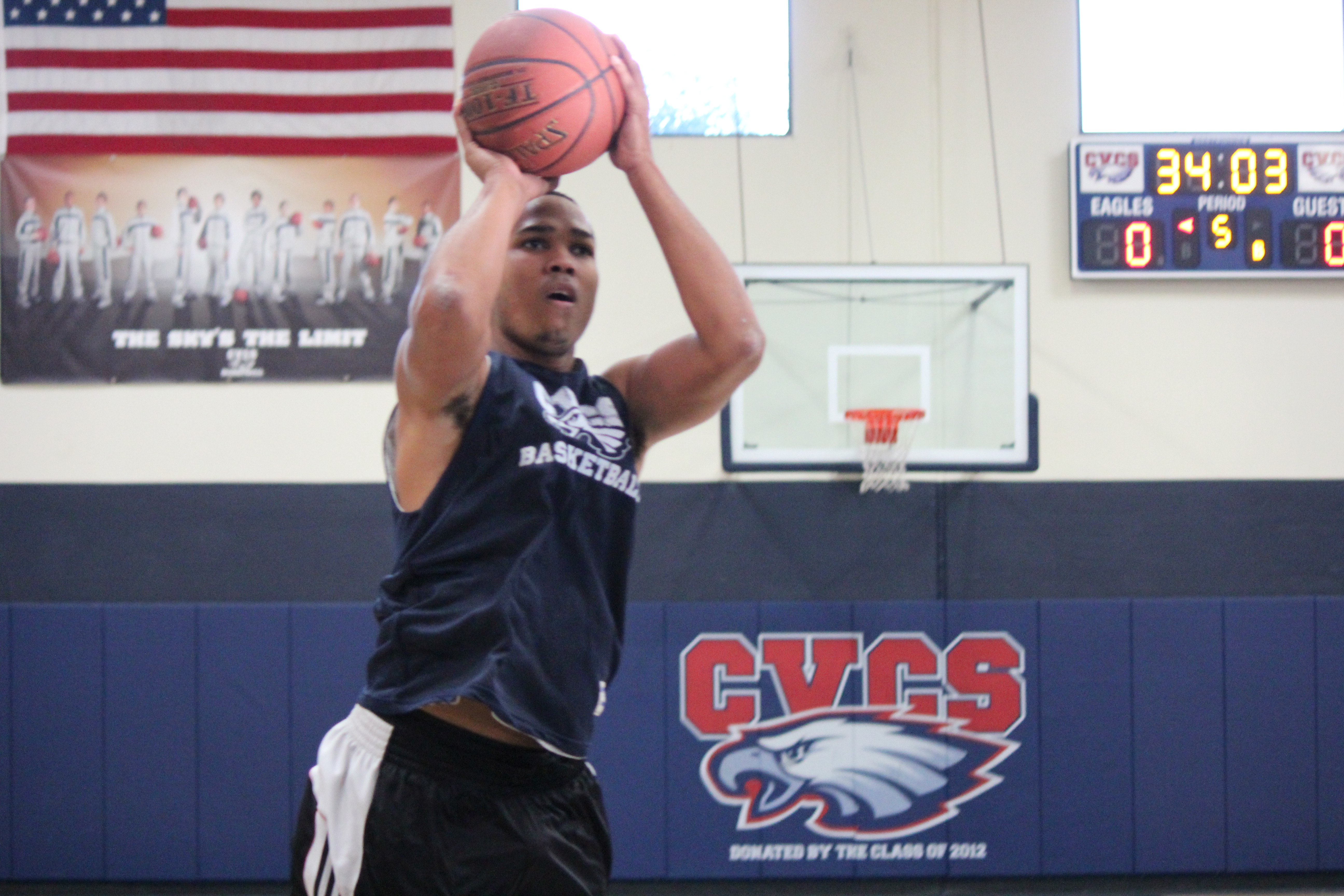 By Steve Breazeale and Michael Vogeler

Last Year: The Eagles went 22-5 overall, finishing second in the San Joaquin League standings. They advanced to the first round of the CIF-SS Division 5A Championships.

This version of the Eagles boys basketball team will be the deepest to hit the court in head coach Zach Brogdon’s four-year tenure. For a team that found its groove last year during a 22-win season, the loss of only one senior bodes well for the Eagles chances of maintaining momentum into 2014.

Brogdon says following the loss of senior RJ Thompson, Smith and Cantarini will be called upon to provide more offense in the paint. With the big men operating down low, that should free up Abramsky, who made 85 3-pointers in 2013, and Thompson to produce outside.

“Having so many returning players really helps us focus on just the execution of our stuff instead of teaching the concepts,” Brogdon said. “We’re really excited for the veteran group we have coming back. We’re looking forward to a really good year.” – Steve Breazeale

After lying dormant for five years, the girls soccer program at Capistrano Valley Christian was revived last season. This year, the upstart team is under the guidance of first-year head coach Jessica McDonnell.

The team’s offense will come from the duo of Shanton, a junior, and Messore, a sophomore. Shanton and Messore operated as the team’s forwards last year and are among the limited number of returning Eagles players.

Wallace, a junior, returns as the team’s goalie.

“We’re going to rely on a lot of ball movement from the backfield and speed,” McDonnell said. “They’re dedicated and they’re going to be in really great shape.” – SB

The Eagles will look to make a foothold in the San Joaquin League in 2014 under the guidance of first-year head coach David Anderson. Anderson was an assistant on the San Juan Hills staff last year, but joins the Eagles for the new season.

Anderson brings with him a coaching philosophy that revolves around the strength of the midfield and defensive back line. Luckily for the Eagles, they return several starters from last year who fill those positions.

Joining the offensive attack up top is senior forward Sam Sukut, a standout running back for the Eagles football team. – SB

Last Year: The Tartans came in second place in the Academy League and advanced to the quarterfinals of the CIF-SS Division 4A playoffs.

With only one senior lost from last season, experience and depth are non-issues for the Tartans. Four of their five starters return from last year, which head coach Brian Carmer attributes to the team’s great chemistry and confidence.

The Tartans (3-1) have consistency, as well as leadership, throughout their lineup and have a history of relying on multiple players to lead the offense. In 15 of 29 games last season, the Tartans had a different leading scorer on the night.

Seniors Morrison and Edwards will be team captains this season, and both were key components in last year’s deep playoff run.

Junior brothers Brian and Chris Murphy highlight a strong group of underclassmen, and they are joined by freshman Sebastian Much (6-feet-6-inches), who pulled in 24 rebounds in the Tartans first two games.

The goal for the team is to win the Academy league, which has been won by rival Brethren Christian the past two seasons.

“We just have a solid group of guys who buy into what we do. They play well together and enjoy being around each other. It’s just a great group,” Carmer said. –Michael Vogeler

Last Year: St. Margaret’s went 17-8 overall, finishing in second place in the Academy League. They advanced to the second round of the CIF-SS playoffs.

The Tartans have high hopes for their season this year. They have six seniors on the roster, who will help to provide experience and leadership.

Head coach Lori Fava scheduled a tough preseason lineup in order to get the team ready for Academy League play, which includes rival Crean Lutheran, as well as Whitney. The team is also playing in the JSerra Tournament later this month, which will feature some of the top ranked teams in the state.

Coleman and Burgos are both four-year starters for the Tartans, and are expected to have big seasons.

“Our goal is to get better as the season progresses. With a tough nonleague schedule, it will help us as we get ready for league play,” Fava said. – MV

Last Year: The Tartans captured the Academy League title and advanced to the quarterfinals of the CIF-SS Division 5 Championships.

The Tartans may have lost eight starters to graduation and transfers, but an influx in young talent has them poised to contend for the league title and yet another deep playoff run.

The Tartans have only one senior, Barbaresi, but are full of rising talent, including a strong crop of freshman.

Beall, a freshman goalie who is in the U14 USA National team pool, notched her first varsity start December 11 when the Tartans defeated Saddleback Valley Christian 5-1. Crowley gave those in attendance a possible glimpse of things to come by recording a hat trick and tallying an assist in the victory.

The young talent will be surrounded by returning players like Short, a junior center back, and Gencarella, a sophomore midfielder.

“We looked really good against Saddleback Valley Christian. I think we have the potential to be successful,” Johnny Marmelstein said. “We have some retuning players who are going to play a lot of minutes and do well for us and we have freshmen who will be really good.” – SB

Last Year: The Tartans went 4-6 on the year, while sending 12 out of their 14 wrestlers to the CIF Masters meet.

Head coach Jorge Carrizosa believes that his young Tartans squad won’t let their inexperience get in their way of competing for the dual league title.

There is only one senior on the team, Kim, and two juniors. With mostly all freshmen and sophomores on the roster, the Tartans lack experience, but have still developed since last year, according to Carrizosa.

This year the Tartans will honor the life of Jeff Fohrman, a volunteer coach who passed away last year after battling brain cancer. All of the proceeds from the Jeff Fohrnman Memorial Tournament, set to take place December 20-21, will be donated to brain cancer research at UCI Medical Center.

“I first made the tournament to get competition that was similar to our school, which are up and coming. When I found out that Jeff passed away this last summer, I said lets honor it for coach,” Carrizosa said. – MV

Last Year: The Warriors claimed the San Joaquin League title and advanced to the quarterfinals of the CIF-SS Division 5AA Championships.

The Warriors (3-1) return four starters from last year’s CIF-SS Division 5AA quarterfinals run and could benefit with the addition of transfer Mario Soto to their lineup. Soto is reportedly in the process of transferring from Mater Dei, where he was a part of their state championship effort last season, and is awaiting a ruling on his valid change of residence from the CIF offices.

Leading the way for the up-tempo Warriors offense will be Rwahwire and Seward, two play-making forwards.

It’s early in the season but the Warriors already have impressive wins over Foothill and Mission Viejo, both perennial Division 1AA playoff teams.

“Everybody’s goal is to win CIF so that’s our ultimate goal, as a team, to make it to the finals and win it,” head coach Tom Lewis said. – SB

Last season the Warriors had to compete with only six players on their roster. This year, they will be a much deeper team, thanks to the addition of five more players.

Although they will have a deeper bench to draw from, the Warriors will still rely on familiar faces. A quartet of returning seniors, featuring Seward, McWayne, Perryman and Maddi Bernier remain part of the core starting rotation.

Head coach Jesse Mercado, who enters his second year at the helm, says the team’s defense has been the key to the Warriors 5-0 start to the new season.

Last Year: The Warriors placed second in the San Joaquin League and advanced to the second round of the CIF-SS Division 7 Championships.

The Warriors lost three impact seniors to graduation over the offseason, including the 26-goal scorer Brock Pittman. Looking to fill that void will be team captains Adickes (central midfield) and Zamora (forward).

Head coach Stephen Jennings said the team may be down in the offensive category with the loss of Pittman, but where they have made strides over the offseason is on defense. The backbone of the defensive unit will be junior goalie Minsberg, who Jennings said is a physical presence in the box.

The Warriors (1-3-2) have faced tough competition in the early going and will continue to test themselves at the North Orange County Classic from December 20-21. The Warriors are in Division 7 of the CIF-SS but will face plenty of Division 3 talent at the tournament. – SB

Last Year: The Warriors did not lose a game in league play en route to the San Joaquin League title. They advanced to the second round of the CIF-SS Division 7 Championships.

The Warriors enter the new season as the five-time defending San Joaquin League champions and this year, head coach Josh Cummins is preparing the team not just for the regular season and league play, but for a deep playoff run.

Saddleback Valley Christian has hit the proverbial bump in the road in the first and second round of the CIF-SS playoffs in recent years. In anticipation for the tough competition that they will face in the postseason, Cummins has scheduled a scrimmage against Newport Harbor and nonleague games against JSerra Catholic and St. Margaret’s in hopes that his squad will gain experience in the process.

The Warriors will rely on the all-around game of Castle, who was second on the team in goals scored last year. Castle’s offensive playmaking abilities will be anchored by the Warriors consistent goalie, Martin, according to Cummins. – SB