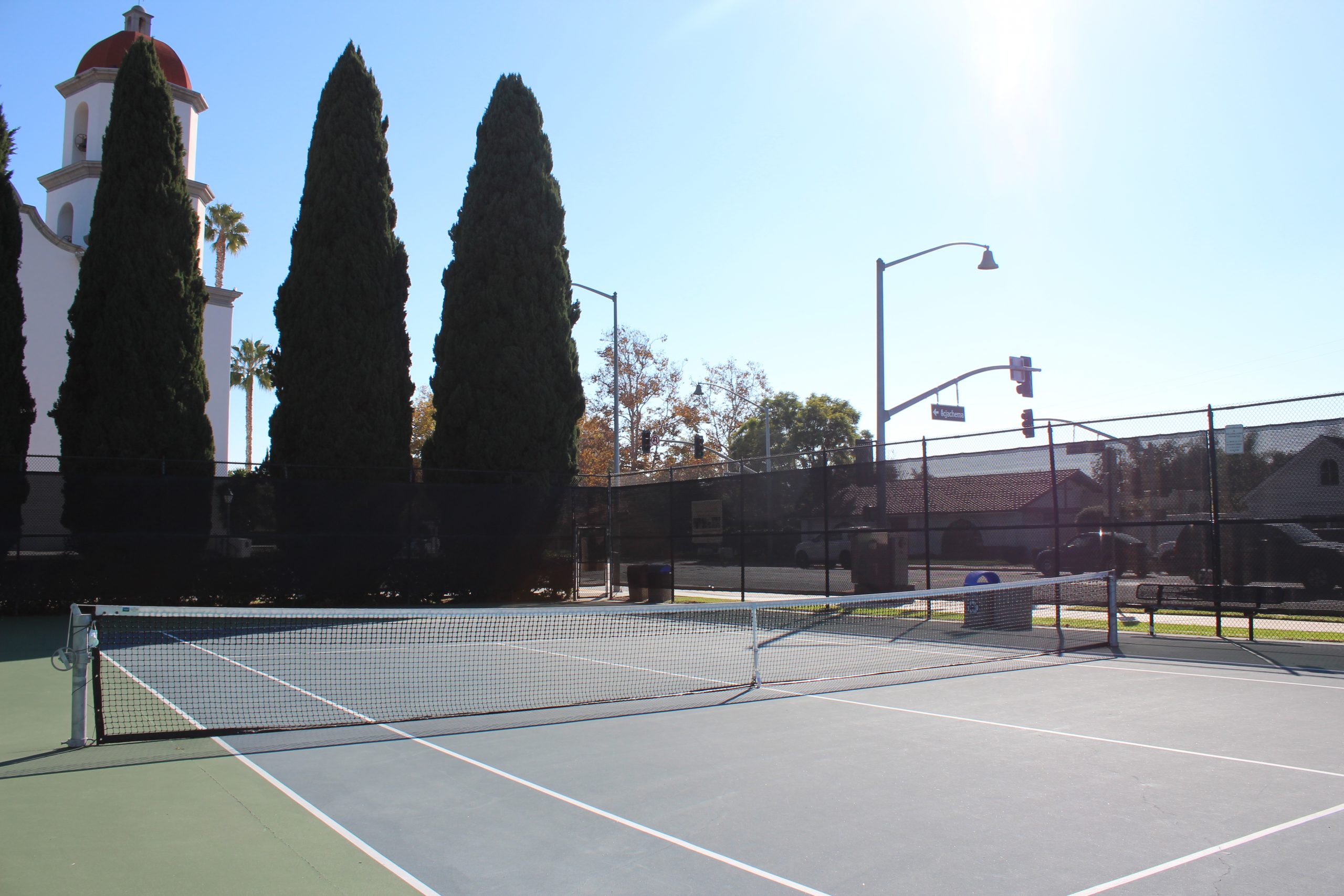 Featured photo: One of two tennis courts in San Juan Capistrano will be converted into pickleball courts, due to the growing popularity of the latter sport. Photo: Collin Breaux

The City of San Juan Capistrano is joining in on the growing popularity of pickleball, a topic that came up during a council meeting on Tuesday, Nov. 2.

A modified motion by Councilmember Howard Hart directing city staff to convert one of the two tennis courts on Camino Capistrano (by Capistrano Union High School) into several pickleball courts was approved by his peers on the dais with few objections.

“Over the past two years, a pickleball course has been offered through the Community Services Department at the westerly Camino Capistrano tennis court. This class involves temporary court markings and is well-attended,” Hart said. “Additionally, this past summer, Public Works staff received a request from the Open Space Foundation to permanently convert one of the two Camino Capistrano tennis courts to four new pickleball courts.”

Pickleball is a new sport that mixes in aspects of tennis, badminton, and Ping-Pong. Participants use paddles to hit a small ball over a net on a tennis-style court. Games can be played one-on-one or two-on-two.

“We were looking at what can we do to give back to the community that wasn’t as expensive as a big capital improvement such as Reata Park, which was millions of dollars and tons and tons of volunteer hours. We came up with this pickleball court proposal as a board,” Open Space Foundation President Harrison Taylor said. “We would also like to propose resurfacing the tennis court, because additionally when we put this proposal together, we wanted to just focus on pickleball, but then we realized if we resurface these four courts, the adjacent tennis players are going to feel like they’re forgotten.”

“We can probably have it done in the first or second quarter of 2022,” Siegel said.

Siegel also recommended the conversion be wrapped into plans to install another pickleball court at Cook La Novia Park, which the city also plans to do in early 2022 as part of a previously approved capital improvement project. Hart’s original recommended action was for city staff to explore the potential of putting up up new pickleball courts along Camino Capistrano.

Other opportunities for the Open Space Foundation to financially contribute to other projects might be available in the future, Siegel said.

Councilmember Troy Bourne said pickleball is popular with residents and visitors at Reata Glen—a senior living facility in nearby Rancho Mission Viejo that he oversees—and is a “neat little intergenerational thing that allows people to play at all ages.”

Mayor John Taylor, who is Harrison Taylor’s father, said pickleball is appealing because people can get into it on their first try, and it is not as frustrating to play as tennis or similar sports.

“If this all were to come to fruition, we’d love to have a kickoff, invite the community, hand out free paddles, really try to include everyone and not just people that are already pickleball players,” Harrison Taylor said.

“I understand the popularity of one sport versus the other. I think we could make the same argument for eliminating the rest of the baseball fields in town and just make them all soccer fields,” Farias said. “You start to see that in other municipalities, but I wouldn’t support that, either, because you’ve got to preserve certain sports and have something for everybody.”

Despite Farias’ comments, the vote to approve the four new courts was unanimous.