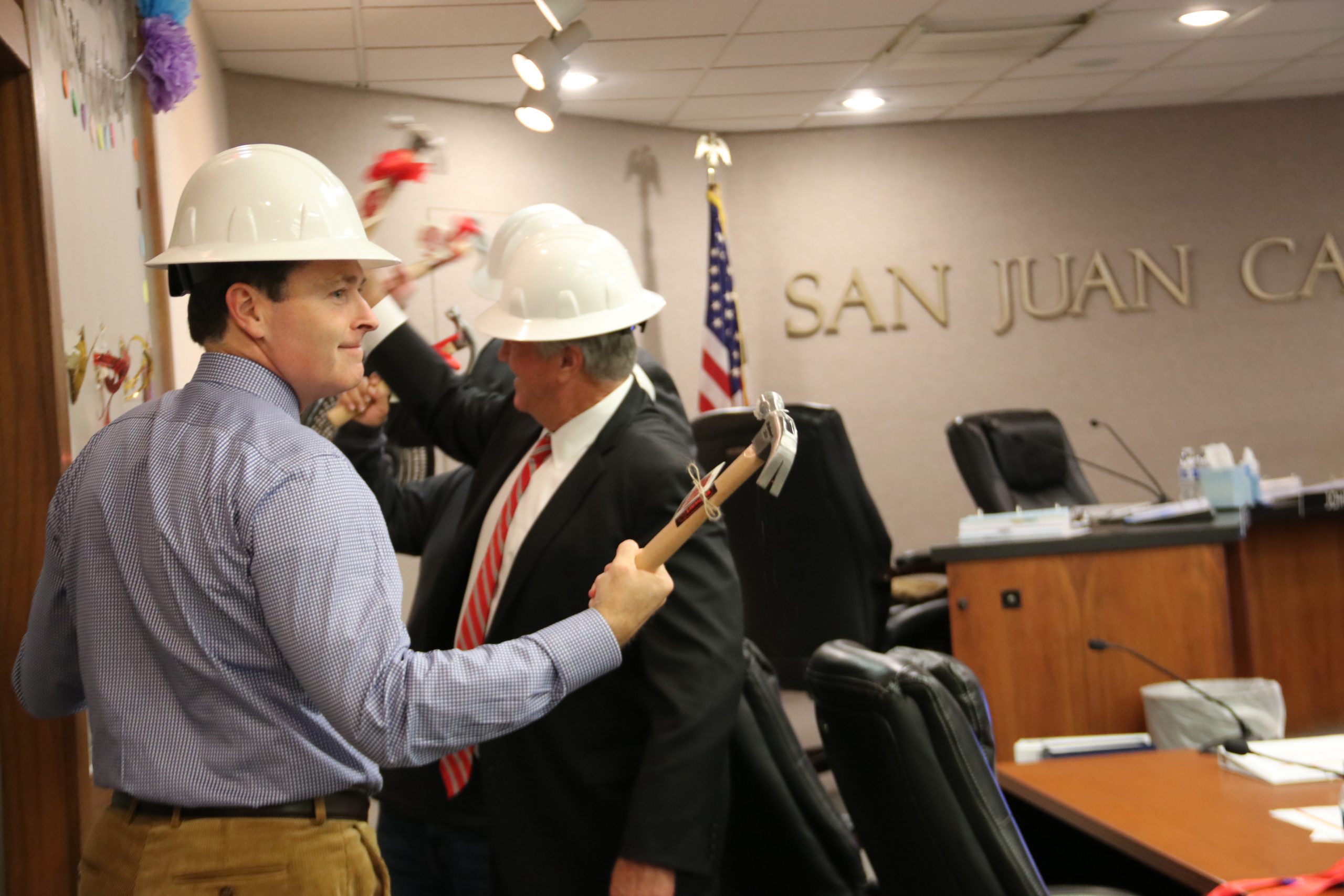 As the opening notes to the Guns N’ Roses song “Welcome to the Jungle” played, the San Juan Capistrano City Council used hammers to smash holes in a wall of City Hall.

The current City Hall building will soon be demolished to make way for a new facility, and the City Council wanted to playfully kick off the transition during their last meeting at City Hall on Monday, Nov. 14.

City officials and staff bid farewell to the building—which has been “temporary” for decades—as they chowed down on tacos and cake in the parking lot during a pre-meeting ceremony, and later during the meeting itself. Packing boxes lined the back of the City Council Chamber on Monday night.

There were no tears shed for the outgoing building, which city officials have previously said does not exude the atmosphere one thinks of when picturing City Hall.

“After over 50 years, tonight will be the final meeting in the City Council Chamber,” Mayor Pro Tem Howard Hart said. “Later this week, we’ll be moving to temporary City Hall offices on Rancho Viejo Road and temporarily relocating the Council Chamber to the Nydegger Building on La Matanza Street, while the permanent Council Chamber is constructed at the Community Center.”

A formal groundbreaking ceremony with Jamboree Housing Corporation—which will also be constructing an affordable housing complex at the City Hall site for veterans and formerly homeless people—is in the works for January.

The new City Hall building will be two stories, and construction is anticipated to be complete in January 2025. Construction on the new City Council Chamber at the Community Center is expected to begin in February of next year and be complete by that September.

Other city governing boards, including the Planning Commission and Cultural Heritage Commission, will also conduct meetings at the Nydegger Building during construction and eventually at the new City Hall complex after construction.

“I can say I’m the only person that’s been under this building that’s in the room, and I’ve been under it several times fixing the phone wires from rats eating them,” said resident and community volunteer Steve Behmerwohld, who used to work as a telephone lineman. “We’re going to be much better off with a new abode, and hopefully, this thing with the transitional housing will work out, and staff will have a much nicer place to work. Congratulations.”

Hart had a wry dig at the current building when a technical snafu briefly happened during a city staff presentation on a separate agenda item.

“This building almost made it to the end,” he quipped.