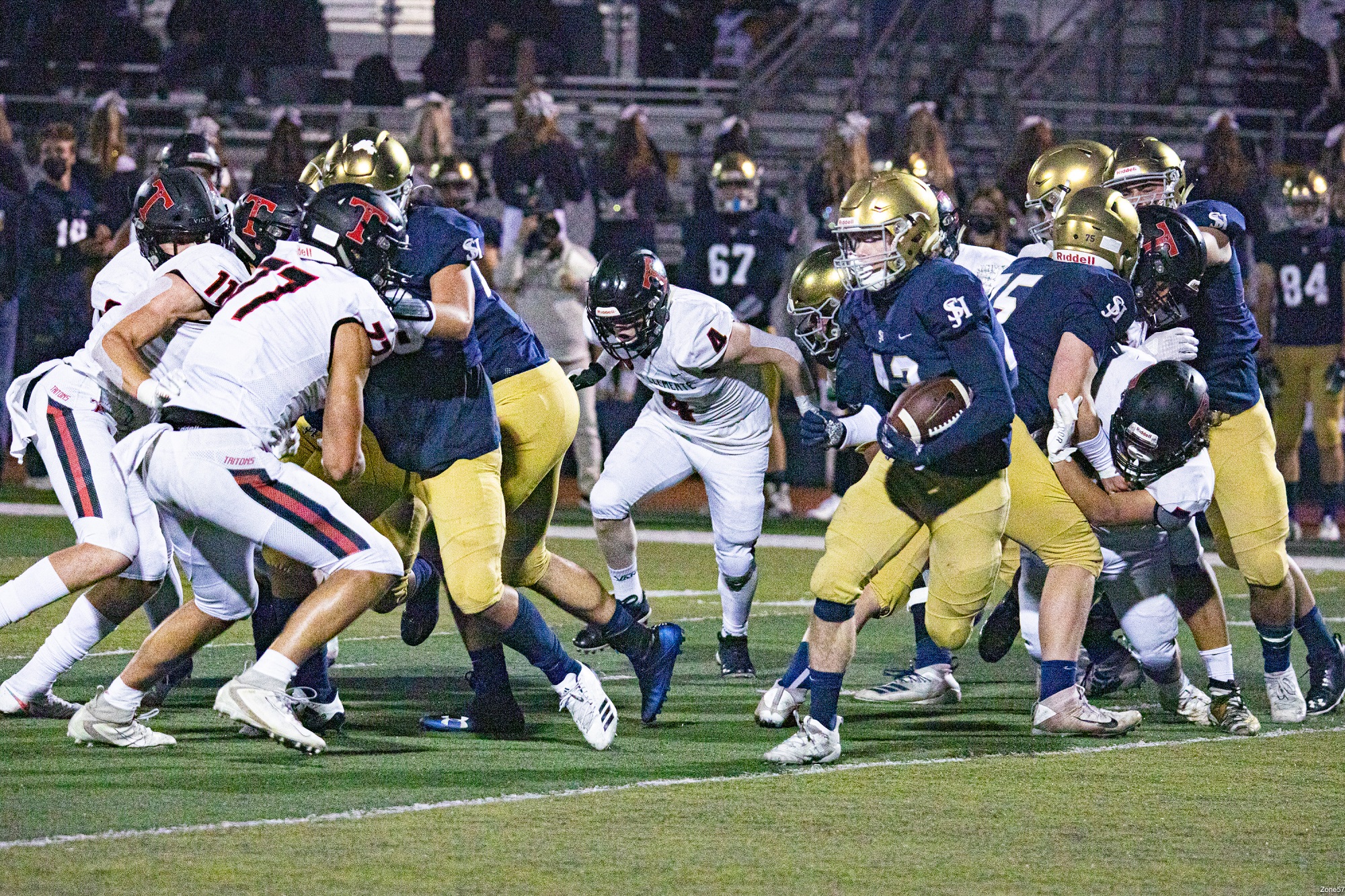 San Juan Hills Football Edged in ‘Battle for the Bell’

After winning its second consecutive Sea View League title and its first CIF-SS championship in Division 4 last season, the San Juan Hills football team didn’t get a warm reception in its return to the South Coast League.

The Stallions’ best shot at a league victory came against rival Tesoro in the second edition of the “Battle of the Bell,” but victory slipped out of San Juan Hills’ fingers.

San Juan Hills led by 12 points in the first half and had to retake the lead in the fourth quarter, but Tesoro completed its comeback and got just enough to defeat the Stallions, 26-25. Tesoro took the bell for the second consecutive season with the win at the Badlands.

San Juan Hills pushed out to a 19-7 lead late in the second quarter, but that’s when Tesoro started its push. The Titans scored just before halftime to cut the deficit to six, 19-13, and Tesoro took the lead late in the third quarter, 20-19.

San Juan Hills was then stopped on fourth down, and despite getting the ball back one last time, the Stallions were denied again, as Tesoro claimed the bell.

The Stallions opened the season in prolific fashion with high-scoring wins over Sea View League foes El Toro, 48-14, and Capistrano Valley, 52-41. San Juan Hills then got hit with injuries and hit with the South Coast League’s best, as eventual league champion San Clemente beat the Stallions, 35-7, and league runner-up Mission Viejo did the same, 49-14.

San Juan Hills will lose some senior championship experience from key positions on the defense and at quarterback, but the Stallions have plenty of young skill that showed its ability this season. San Juan Hills will be ready to compete with a full season in the South Coast League this fall.

With the 2020-21 season complete, it will be one the young JSerra football team only uses as motivation to improve, with the results in a winless season kept in the rearview mirror.

The Lions put up a season-high in points in their season finale, but Orange Lutheran’s passing attack proved to be too much, as the Lancers closed out the season with a 52-20 win at JSerra Catholic High School on Friday, April 16.

The Lions recorded two highlight plays in the third quarter. Freshman quarterback Dylan Mills, who scored in the first half on a 1-yard sneak, hit sophomore receiver Edward Schultz up the seam on a 73-yard touchdown pass, and senior Dominic Corado found a lane with good blocking on a 95-yard kickoff return.

Despite JSerra’s big plays, Orange Lutheran (1-4) kept coming up with more of its own. The Lancers threw for six touchdown passes, including two 36-yard TD passes, a 38-yard scoring pass and an 86-yard touchdown pass. Orange Lutheran also blocked a JSerra field goal and returned it for a touchdown in the second quarter.

It was always going to be tough sledding for JSerra in this delayed and shortened pandemic season. The Lions experienced massive roster turnover in the offseason with graduations and transfers, which left a young roster to take on an all-Trinity League slate. Mater Dei (5-0) once again won the Trinity League, with rivals St. John Bosco (4-1) and Servite (3-2) right behind.